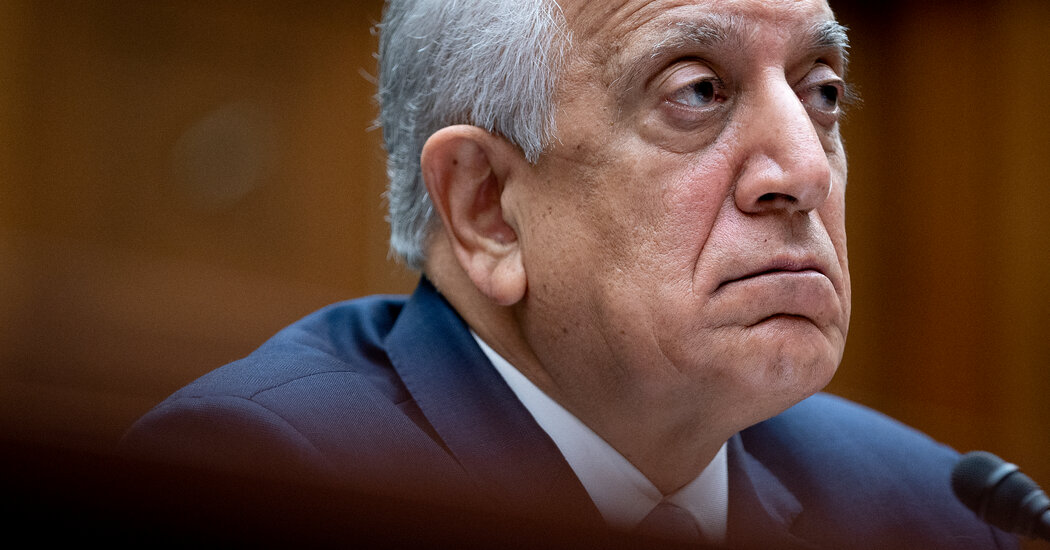 WASHINGTON â€” Zalmay Khalilzad, President Bidenâ€™s envoy for Afghanistan and a rare Trump appointee to remain in the new administration, is departing from the government, the State Department said on Monday.

Mr. Khalilzad, 70, who was born in Afghanistan and grew up in the capital, Kabul, was a veteran of past Republican administrations who helped President George W. Bush plan the overthrow of the Taliban in 2002, and then negotiated with Taliban leaders the terms of Americaâ€™s humbling and ultimately tumultuous exit from the country nearly 20 years later.

After President Donald J. Trump appointed him in September 2018 to pursue peace negotiations with the Taliban, Mr. Khalilzad spent much of the following 18 months in Doha, Qatar, meeting with Taliban representatives to craft an agreement, signed in February 2020, under which the Trump administration committed to the full withdrawal of American troops that Mr. Biden completed in August.

To his critics, Mr. Khalilzad enabled a peace process that was little more than a fig leaf for Mr. Trumpâ€™s determination to exit Afghanistan swiftly, with little regard for the fate of its government or people. In recent interviews, Mr. Khalilzad has argued that he did not set overall U.S. policy and extracted as many concessions as he could from Taliban leaders.

In an Oct. 18 resignation letter to Secretary of State Antony J. Blinken, in which he said he would step down on Tuesday, Mr. Khalilzad said that he was asked to join the Trump administration â€œafter the decision had been made to substantially reduce or end the military and economic burden of the Afghan engagement on the U.S. and to free those resources for vital priorities, including domestic needs and the challenge of dealing with issues related to China.â€

Mr. Khalilzad, who long supported the vision of a more modernized, pluralistic and democratic Afghanistan, lamented in his letter that â€œthe political arrangement between the Afghan government and the Taliban did not go forward as envisaged.â€

â€œThe reasons for this are too complex and I will share my thoughts in the coming days and weeks, after leaving government service,â€ he wrote.

As the Taliban stormed through the country in August, capturing city after city, Mr. Khalilzad continued to negotiate with its leaders, urging them to negotiate a peaceful political transition and political power-sharing agreement with the Afghan government. He was unable to do so before President Ashraf Ghani fled the country on Aug. 15, saying he feared for his life.

After the Taliban captured Kabul, Mr. Khalilzad helped facilitate safe passage for American civilians and at-risk Afghans. In all, 120,000 people were evacuated from the country.

A naturalized American citizen, Mr. Khalilzad had a lifelong personal investment in the country he first left for the United States as a high school exchange student. He served as envoy for Afghanistan during the Bush administration and then U.S. ambassador, and even once considered seeking the Afghan presidency.

During the 2016 presidential campaign, Mr. Khalilzad introduced Mr. Trump before a foreign policy speech hosted by the Center for the National Interest, with which Mr. Khalilzad was affiliated, and was rewarded with the Afghanistan envoy post under Secretary of State Mike Pompeo.

Many Democrats assumed that Mr. Khalilzad would leave government at the end of the Trump administration, but Mr. Blinken asked him to remain in his job, with the official title of special envoy for Afghanistan reconciliation.

Mr. Blinken valued Mr. Khalilzadâ€™s deep familiarity with Taliban leaders as the Biden administration continued to negotiate the terms of Americaâ€™s military exit. Mr. Khalilzad also benefited from his relationship with Mr. Biden, whom he hosted during visits to Afghanistan when he was ambassador and Mr. Biden a senator.

In a statement on Monday, Mr. Blinken thanked Mr. Khalilzad for his â€œdecades of service to the American people.â€ Mr. Blinken said that Mr. Khalilzadâ€™s deputy, Tom West, would become the State Departmentâ€™s special representative for Afghanistan.

Who are the Taliban leaders? These areÂ the top leaders of the Taliban, men who have spent years on the run, in hiding, in jail and dodging American drones. Little is known about them or how they plan to govern, including whether they will be as tolerant as they claim to be. One spokesman told The TimesÂ that the group wanted to forget its past, but that there would be some restrictions.

Mr. Khalilzad has already begun to ruminate in public on how the U.S. project in Afghanistan failed so badly.

In an interview with Foreign Policy magazine published last month, he said the notion that he made the decision to withdraw all American troops from the country â€œboggles the mind,â€ and joked that he was flattered at the idea that he was the mastermind of the U.S. exit.

He said important questions he would ponder included whether Americaâ€™s â€œambitions were too large compared to the strategy and resourcesâ€ and whether Washington â€œshould have pushed harder for a political settlement earlier.â€

And he ultimately pointed a finger at the Afghan government for failing to come to terms with a growing reality over the past several years.

â€œI think that the grand miscalculation of the Afghan leadership was this: that we were not going to leave,â€ he said.