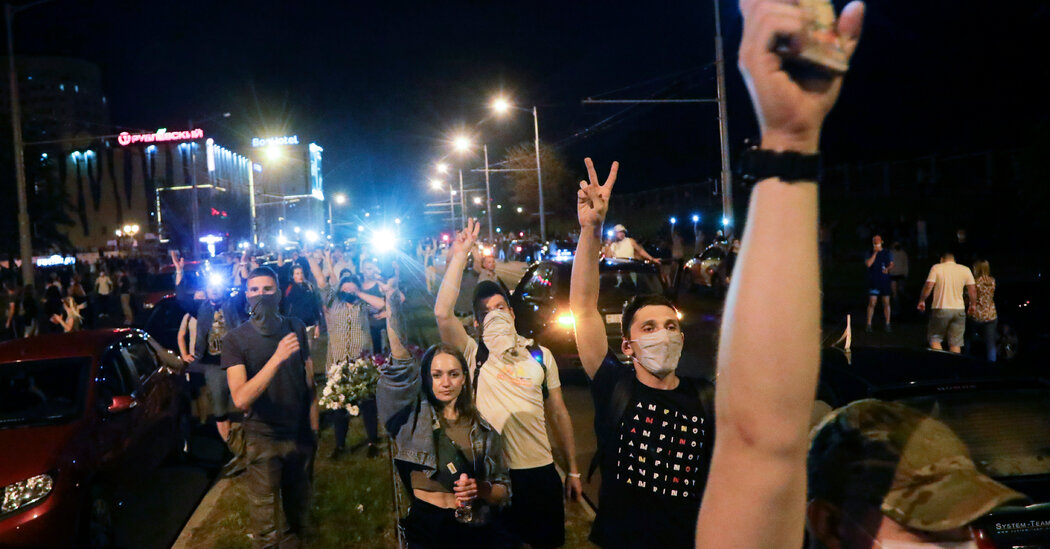 We’re covering the resignation of Lebanon’s government, violent clashes in Belarus and why a fear of hospitals is worsening Mexico’s coronavirus outbreak.

Prime Minister Hassan Diab and his cabinet resigned on Monday, opening up a political void as the country reels from the enormous explosion last week in the capital, Beirut.

In a televised address, Mr. Diab said he and cabinet ministers had been blocked at every turn by political foes. He will take on a caretaker role as the parties in Parliament consult with President Michel Aoun on choosing a new prime minister. It may be months until a new cabinet is in place, leaving the government to coast in the interim.

The fall of Mr. Diab’s government reflects how deeply last week’s explosion — which killed more than 150 people, wounded 6,000 and displaced hundreds of thousands — has rattled Lebanon. Lebanon is also struggling with inflation, unemployment rates and an outbreak of coronavirus. Many saw the blast as a sign of decades of mismanagement. (Read more in our Back Story below.)

On the ground: Protesters gathered near the Parliament building, saying the resignations so far had fallen short of their demands for the ouster of the country’s political elite. “I have nothing to lose,” said Krystel El Khoury, 24. “I just graduated. I’m an architect. I’m unemployed and I don’t have hope. Either we do this or we leave this country.”

The capital of Belarus slipped into mayhem on Monday as protesters barricaded streets and riot police officers used violent baton charges, stun grenades and tear gas to beat them back.

The unrest continued one day after President Aleksandr Lukashenko, who is often called “Europe’s last dictator,” claimed a landslide re-election victory that has widely been dismissed as fraudulent.

The Ministry of Interior, which controls police forces loyal to Mr. Lukashenko, said on Monday that one protester had died during a confrontation with security forces. Another protester was reportedly killed on Sunday when a police vehicle was driven into him, but officials denied this.

Details: The authorities vowed to crush the demonstrations, which were in their second day across the country. The government shut down subway stations, sealed off roads and poured armed riot police officers into the capital, Minsk. Thousands of demonstrators have been detained in the city and elsewhere.

Context: In the past, Mr. Lukashenko’s tight grip on a loyal security apparatus has quickly curbed postelection protests. But many say this time is different because of the scale of the election fraud.

Britain, moving aggressively to reopen its economy after three months of lockdown, now faces what some see as a binary choice between two hallowed institutions: schools or pubs.

On Monday, Prime Minister Boris Johnson went for schools, declaring it a “moral duty” to open Britain’s classrooms next month. But to avoid a second coronavirus surge, medical experts say the government will have to be ready to sacrifice pubs, as well as restaurants, which reopened a few weeks ago under social distancing guidelines.

Teachers’ unions and local governments generally accept that schools should reopen, but they have argued that Britain’s system for testing and contact tracing is not robust enough to cope with new outbreaks. Some said the government appeared to be playing catch-up in its push to reopen schools after emphasizing other priorities, like eating out in restaurants.

The contact tracing system in England, after months of complaints, will be overhauled, the government said on Monday. Resources will be diverted to local public health officials. The jobs of thousands of call center workers, who had complained of having no one to call, will be eliminated.

What it means: Primary schools have not been incubators for the virus in countries that enforced social distancing and mask-wearing, but there have been outbreaks at secondary schools in Australia and Israel. Younger children are less likely to spread the virus, but the risk is far from zero.

If you have 6 minutes, this is worth it

‘I’d rather stay home and die’

Mexico is battling one of the worst coronavirus outbreaks in the world. At least 52,000 people have died — the world’s third-highest toll, after the U.S. and Brazil. Mexico’s struggle has been made harder by a pervasive phenomenon: a deeply rooted fear of hospitals. Above, a family at the grave of a relative in Tonanitla, Mexico.

Many Mexicans see virus hospital wards as places where only death awaits — to be avoided at all costs. That means sick people don’t seek care until their condition is so bad that doctors can do little to help them.

Here’s what else is happening

U.S. unrest: Chicago raised bridges to the main shopping district and the police arrested more than 100 people after looting battered the city’s downtown. A police official said the events grew out of a shooting on the South Side on Sunday afternoon.

McDonald’s: The fast-food chain sued Steve Easterbrook, its former chief executive, who was fired last year for sexting with a subordinate. Eight months after the firing, the company has accused him of concealing evidence during an investigation into his conduct.

Algerian journalist: The journalist Khaled Drareni was sentenced to three years in prison for reporting on protests that forced the removal of the country’s longtime ruler, Abdelaziz Bouteflika, last year.

Champions League: European soccer’s showpiece competition seemed to account for every possibility in the pandemic. But even before the teams arrive, the coronavirus may have other plans, with one team facing an outbreak.

Snapshot: Above, Causeway Bay Books in Taipei, Taiwan. Lam Wing-kee, the store’s owner, fled Hong Kong last year, leaving his previous bookshop behind. In his new city, he has recreated it, and it has become a symbol of Taiwan’s vibrant democracy as Hong Kong’s fades.

What we’re reading: This useful guide, from Vice, to not being on your phone all the time. “There are tips for logging off and also an invitation to think about why it is you can’t stop scrolling,” writes Carole Landry from the Briefings team.

Now, a break from the news

Cook: These seared scallops with jammy cherry tomatoes are a reminder that in-season produce and fresh seafood shine brightest with minimal fussing.

Look: Get a close-up view of “Ejiri in Suruga Province,” a 19th-century woodblock print by Katsushika Hokusai. It’s part of his renowned cycle “Thirty-Six Views of Mount Fuji.”

Do: Crayola, Old Navy and Disney are among the brands making colorful masks for children. Child psychologists see this as a positive step toward “normalcy.”

At Home has our full collection of ideas on what to read, cook, watch, and do.

And now for the Back Story on …

Our Beirut bureau chief visited three devastated neighborhoods — one middle-class, one poor and one upscale — after the explosion last Tuesday. He found residents in all three places who were furious at their government, which they saw as corrupt and ineffectual. Here are stories from each neighborhood:

Gemmayzeh. If you ever received a postcard from Beirut, the photo on it was probably taken around Gemmayzeh. The main drag is lined with bars and restaurants where patrons, in better times, overflowed into the street through the night.

This was where Rabih Mouawad and his business partner, Chantal Salloum, tried their luck with the Barn, a healthy and hip eatery with organic produce. They invested $450,000 to get it ready.

But the blast heavily damaged the neighborhood, punching through apartments, killing residents in their homes and blocking roads with rubble and uprooted trees. The Barn was destroyed six days before it was scheduled to open.

The Quarantine. Named for its history as a holding area for potentially infectious travelers, this neighborhood is poor, polluted and squeezed between the port, a major highway and a garbage processing center.

“The Quarantine has always been neglected,” said Fakhrideen Shihadi, a Quarantine native who oversees its tin-roofed mosque. His employer, the processing center, has stopped paying him since the economy contracted. He kept working anyway so he wouldn’t lose his job.

The explosion tore through the neighborhood, shaving walls from its tenements, killing four of Mr. Shihadi’s neighbors and filling the streets with smoke and wounded people. He and his family escaped their building unscathed.

Downtown. After the country’s devastating 15-year civil war ended in 1990, Beirut’s downtown was rebuilt, with investments from the Persian Gulf and wealthy Lebanese, as a showcase meant to reclaim Lebanon’s reputation as the “Switzerland of the Middle East.” But the area never fully took off.

Most Lebanese couldn’t afford the apartments or restaurants. Political turbulence and fear of Iran-backed Hezbollah, the militant group and political party, kept wealthy tourists away. The area became a battleground of tear gas, fires and flying rocks over the weekend as angry protesters tried to shake a political order they felt had failed them.

That’s it for this briefing. See you next time.

To Theodore Kim and Jahaan Singh for the break from the news. You can reach the team at briefing@nytimes.com.

• We’re listening to “The Daily.” Our latest episode is about what it means to be “canceled.”

• Taylor Lorenz, who covers internet culture for The Times, has been named one of Adweek’s Young Influentials, leaders in media, marketing and tech.

Kamala Harris: 'Believe in what we can do together'