Home Economy WORST DROP EVER for US economy as GDP crashes 33% due to... 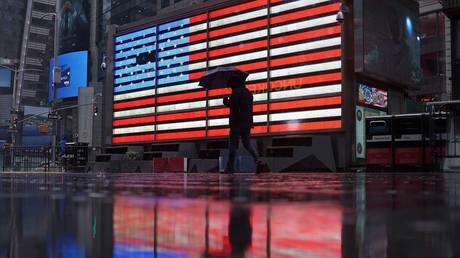 The Bureau of Economic Analysis said on Thursday that the coronavirus pandemic triggered the sharpest contraction of the US economy ever in the second quarter this year, causing a historic plunge in consumer and business activity.

Data shows that US gross domestic product (the broadest measure of economic activity) shrank by 32.9 percent. That’s by far the worst plunge ever recorded, based on Bureau of Economic Analysis (BEA) data spanning back to 1947.

Before the pandemic, the worst GDP drop on record was in the first quarter of 1958, when GDP fell 10.0 percent on an annualized basis. The economic shock in April, May, and June was roughly four times as sharp as the worst quarterly decline during the Great Recession.

According to the BEA, economic activity contracted by 5.0 percent in the first quarter of 2020, which captured only the start of the coronavirus pandemic and business shutdowns in March.

Also on rt.com
‘This is the beginning of the greatest financial crisis in US history’: Peter Schiff makes dire predictions to Boom Bust


“The decline in second-quarter GDP reflected the response to COVID-19, as ‘stay-at-home’ orders issued in March and April were partially lifted in some areas of the country in May and June, and government pandemic assistance payments were distributed to households and businesses,” the BEA said.

“This led to rapid shifts in activity, as businesses and schools continued remote work and consumers and businesses canceled, restricted, or redirected their spending.”

The bureau added that “The full economic effects of the COVID-19 pandemic cannot be quantified in the GDP estimate for the second quarter of 2020 because the impacts are generally embedded in source data and cannot be separately identified.”

The report shows sharp contractions in personal consumption, exports, inventories, investment, and spending by state and local governments. Personal consumption, which historically has accounted for about two-thirds of all activity in the United States, subtracted 25 percent from the Q2 total, with services accounting for nearly all of that drop.


The report “just highlights how deep and dark the hole is that the economy cratered into in Q2,” said Mark Zandi, chief economist at Moody’s Analytics, as quoted by CNBC. “It’s a very deep and dark hole and we’re coming out of it, but it’ going to take a long time to get out,” he said.

Also on Thursday, the government reported that another 1.43 million Americans filed for state unemployment last week, an increase of 12,000. Although roughly in line with expectations, it was the second week in a row of increased unemployment filings.