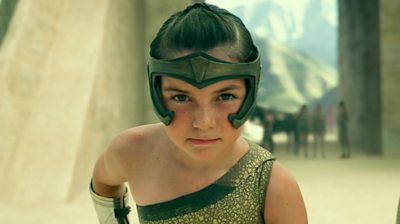 Wonder Woman 1984: Actress Lilly Aspell reveals how a chance encounter led her to the role

Thirteen-year-old Lilly Aspell landed a part in Wonder Woman 1984 after a chance encounter with a director who noticed she looked like the lead actor, Gal Gadot.

Despite never acting before, Aspell was cast as a young Wonder Woman and dreams of becoming the first person to win both an Olympic Gold Medal and a Best Actress Oscar.

The young actress has been speaking to the BBC’s Colin Paterson.