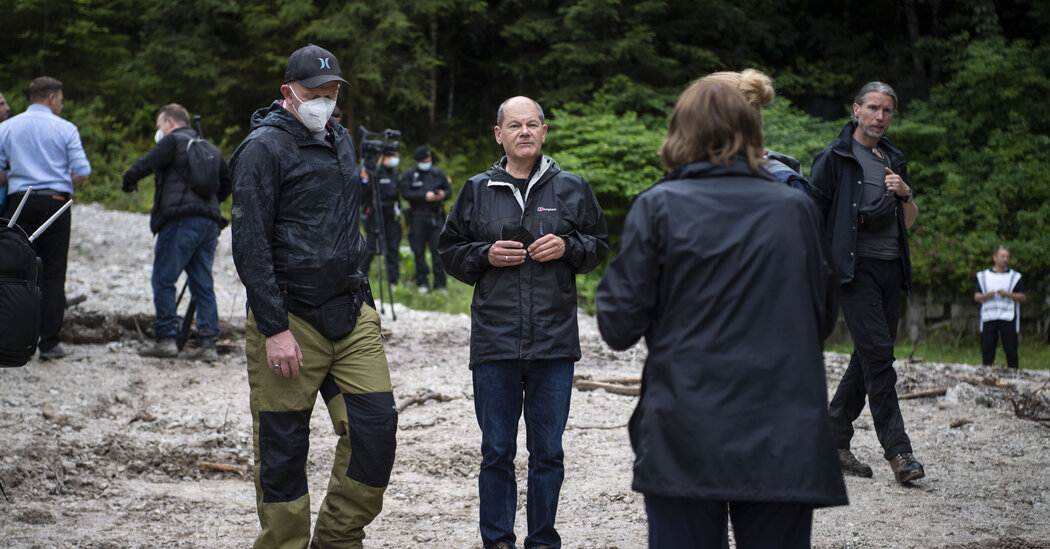 BERLIN â€” In the middle of Germanyâ€™s election campaign, almost 200 people died in extreme floods in Germany. Four months later, the fight against climate change has become the central theme of the new post-Merkel government.

Most roofs will be fitted with solar panels and more than 1,000 windmills will be built, almost doubling the share of renewable sources for electricity to 80 percent by 2030. The last coal mine will close the same year, eight years earlier than planned. And 15 million electric cars will roam the countryâ€™s fabled Autobahn.

At least that is the ambition of what Olaf Scholz, the designated next chancellor, says will be the â€œbiggest industrial modernization of Germany in more than 100 years.â€ It was part of the governing plan he and his coalition partners announced on Wednesday.

Who will pay for it all is another question â€” and one that was hotly debated by the very different parties who have joined Mr. Scholzâ€™s Social Democrats, the progressive Greens and the pro-business Free Democrats.

The Greens campaigned to spend 50 billion euros in green investments each year for a decade to bankroll the countryâ€™s transition to renewable energy â€” and pay for it by scrapping the countryâ€™s strict balanced budget rule.

The Free Democrats agreed to join the government only on condition of not raising any taxes and upholding the countryâ€™s balanced budget law, a so-called debt brake enshrined in its Constitution.

It was not by coincidence that the biggest battle in the six weeks of talks to form a coalition was who would control the finance ministry and with it the purse strings. Both Robert Habeck, co-leader of the Greens, and Christian Lindner, leader of the Free Democrats, wanted the job and fought for it until the end.

Ultimately, Mr. Lindner won, while Mr. Habeck will oversee a new super-ministry of economy and climate.

â€œRegarding finance: Itâ€™s no secret that the positions in the coalition are far apart,â€ Mr. Habeck of the Greens told SÃ¼ddeutsche Zeitung in an interview published Thursday. â€œWe spoke intensely about taxes, cutting subsidies and market regulation. If you ask me where I would have liked to see more, itâ€™s this area.â€

One of the biggest questions for climate change experts is whether the commitment to put Germany â€” Europeâ€™s biggest economy â€” on a path to carbon neutrality by 2045 is still an issue primarily pushed by the Greens or is now truly a project shared by all members of the new administration.

â€œWill its achievements match the ambitions, or will the parties fall back to ideological starting points?â€ said Lutz Weischer, who heads the Berlin-based office of Germanwatch, an environmental watchdog.

There are some hopeful signs, he said. By turning the green transition into a national project of industrial competitiveness and social justice, each of the three parties has been able to sell it to their base.

The new government has woven the commitment to put in place measures that would limit global warming to 1.5 degrees Celsius by the end of the century, as stipulated by the Paris climate agreement, throughout its 177-page governing deal. There are 198 mentions of â€œclimateâ€ in that document, in all policy areas from culture to foreign policy.

â€œThe climate crisis endangers our livelihood and threatens freedom, prosperity and security,â€ the preamble of the coalition treaty states. â€œReaching the climate goals of Paris is our top priority. We want to reinvent our social market economy as a social-ecological market economy.â€

Even Mr. Lindner, the leader of the libertarian Free Democrats, proudly called the treaty â€œthe most ambitious climate protection program of any industrialized nation.â€

â€œIf that really is the spirit of the new government, then it is a real game changer,â€ Mr. Weischer said. â€œBut it remains to be seen.â€

Germanyâ€™s debt brake, which was written into the Constitution in 2009, restricts annual borrowing to 0.35 percent of the nominal gross domestic product, amounting to roughly 12 billion euros a year, a far cry from the 50 billion the Greens say is needed.

But there are signs that the new government has found some back-door solutions to borrowing.

One is to exploit the temporary suspension of the debt brake during the pandemic. As finance minister, Mr. Scholz last year suspended the spending limit, which is allowed under a national emergency, and the coalition treaty says it will not be reinstated until the end of 2022.

That gives the new government time to borrow money and put it in a fund that will continue to run even after the limit on borrowing comes back into force.

Another way to raise money is to beef up the state development bank, known as KfW, which can borrow funds that the government can then earmark for infrastructure projects and other investments â€” without it appearing on the federal budget.

There are also ways to tweak the formula according to how the debt brake is calculated and raise the spending limit that way, economists said.

Few expect that this creative accounting will be enough to raise the 50 billion euros per year the Greens had lobbied for, but the commitment to a significant increase in public investment was broadly applauded.

Marcel Fratzscher, head of the German Institute for Economic Research, said he was impressed with the detail in the proposed measures.

â€œThere is a wind of change in the air,â€ Mr. Fratzscher said. â€œOn climate, it is very ambitious, very detailed and very convincing program. Whether itâ€™s enough to make Germany compliant with the 1.5 degree target is to be seen.â€

Environmental organizations and climate activists were not convinced.

â€œThis coalition agreement alone is not enough to ensure the 1.5 degree limit,â€ the Fridays for Future youth movement said in a statement. According to Greenpeace, the program â€œonly hints at a radical ecological breakthrough.â€

Mr. Habeck, the future economy and climate minister, acknowledged the difficulties ahead.

â€œNo other country in Europe is doing what weâ€™re doing,â€ Mr. Habeck said. â€œOur neighbors either hold on to coal, like Poland, or bet on nuclear energy, like France, or theyâ€™re doing both and a little bit of renewable energy. We are leaving behind both old technologies.â€

â€œThere will be decisions that will be difficult,â€ he added. â€œI know that.â€