Home Economy Why US efforts to damage Chinese tech firms is a â€˜lose-lose propositionâ€™... 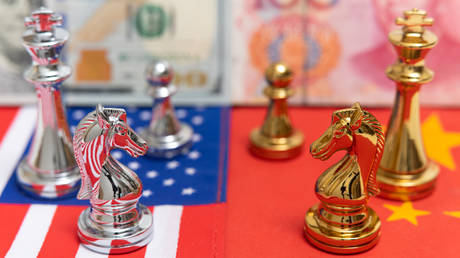 As Washington continues to ramp up pressure on Chinese technology companies and apps, such as Huawei, TikTok and WeChat, Beijing has responded by launching its own global data security initiative.

The plan, announced by the Chinese government on Tuesday, signals that the Trumpâ€™s administration efforts against China are working, Hilary Fordwich of the British-American Business Association believes. However, those policies can easily backfire.

â€œThis actually could be a lose-lose proposition,â€ she told Boom Bust citing Jefferiesâ€™ analysis. â€œThe ban on China means that a lot of US manufacturers of semiconductor chips are going to be out of business.â€

The business development leader explained that China is currently importing even more semiconductor chips than they do oil. Beijingâ€™s 10-year initiative implies that the country will produce 60 percent of their own chips by 2025, and if they stay on schedule, they will manufacture 70 percent of all semiconductor chips domestically.Â

While the recent threat by US President Donald Trump plunged the market value of Chinaâ€™s major semiconductor company, SMIC, its stock is still trading over 50 percent higher over the year. Thatâ€™s because theyâ€™re making â€œso many chips at a rapid rate,â€ Fordwich noted, adding that investment is still flocking to China due to this production boom.