Home World Why are QAnon believers obsessed with 4 March? 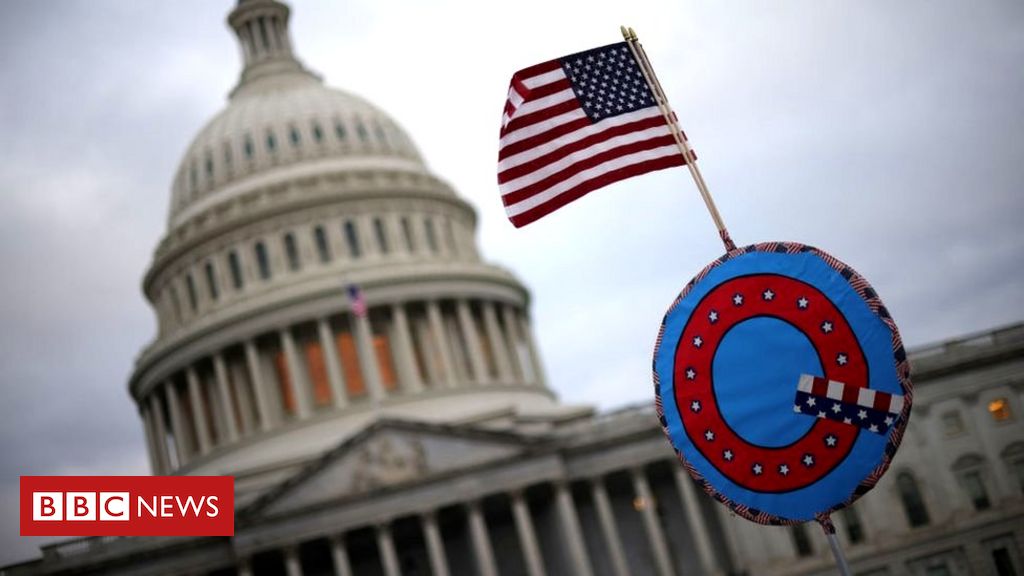 Their hero is no longer president, but some followers of the fringe QAnon conspiracy theory have latched onto obscure, irrelevant laws in an attempt to keep the faith.

It’s been six weeks since the inauguration of President Joe Biden, and it would seem that Donald Trump’s best chance of regaining the presidency would be the 2024 election.

But some of his fervent followers who support the baseless QAnon conspiracy theory believe he’ll be coming back sooner – and will somehow be returned to power on 4 March.

What is the basis of the false claim?

The idea stems from the belief among some QAnon followers that the United States turned from a country into a corporation after the passage of the District of Columbia Organic Act of 1871.

It’s an odd, unfounded theory drawn from the sovereign citizen movement, an extreme libertarian fringe that opposes federal laws, general taxation and even the US currency on the grounds that they restrict individual rights.

Believers in the QAnon offshoot maintain that every US president, act and amendment passed after 1871 is illegitimate.

But the theory is based on a false interpretation of the Organic Act, which merely turned the District of Columbia into a municipal corporation, better known as a local governing body, and has no relation to a president or the US as a whole.

Before the 20th amendment of the US Constitution – adopted in 1933 – moved the swearing-in dates of the president and Congress to January, American leaders took office on 4 March.

That’s why QAnon followers have latched on to this date to underpin their latest theory.

How are QAnon believers reacting?

The date 4 March began spreading among QAnon followers only days after Mr Biden was sworn in on 20 January.

That completely predictable event caused tumult in the world of QAnon – a wide-ranging, completely unfounded theory that says Mr Trump is waging a secret war against elite Satan-worshipping paedophiles.

QAnon followers had been promoting 20 January as a day of reckoning, when prominent Democrats and other members of the alleged “cabal” would be arrested and executed on the orders of Mr Trump.

When the promised “storm” failed to materialise, there was shock and despair among many believers.

“The real POTUS can’t get back into office fast enough. March 4 at the latest… PLEASE GOD!” read a comment in a major QAnon channel on the messaging app Telegram in late January.

Other QAnon followers on alternative social media platforms such as Gab echoed the sentiment.

One influencer, with 55,000 subscribers, suggested there was a 150-year-old clue in the 1871 Organic Act itself. The digits of the act add up to make 17, a symbolic number for the conspiracy’s followers – with Q being the 17th letter of the English alphabet. Numerology “proofs” are big in the world of QAnon.

Why are influencers warning of a ‘false flag’?

With anticipation building among QAnon followers and nearly 5,000 National Guard troops remaining in Washington DC to prevent any potential violence, some influencers have moved in recent days to manage expectations.

They are claiming that 4 March could be a “false flag by the deep state” and mainstream media to frame the movement and encourage supporters to engage in additional acts of violence after the Capitol riots.

QAnon influencers have gone out of their way to distance themselves from the events of 6 January after a number of followers took part.

At least two prominent supporters, “Q Shaman” Jacob Anthony Chansley and Doug Jensen, have subsequently been arrested and charged. Both men have pleaded not guilty to the charges.

“Influencers are attempting to insulate themselves from less media-savvy QAnon followers who will say or do things on camera that aren’t strategic for the longevity of QAnon.”

Despite the recent pushback from influencers, some followers remain convinced that the promised “storm” or reckoning is set to be fulfilled on 4 March, with some warning that without a major event on Thursday, they might take matters into their own hands.

“I’m giving this… till March 4 I am packed and ready for civil war,” one supporter said in a Telegram chat.

“March 4 better yield results or some of us are going rogue,” read another post.

But with 4 March set to be yet another disappointment and no new posts by “Q” since 8 December, followers are floating new potential dates for Mr Trump’s supposed return to power, ranging from 20 March to April to later in 2021 or even some time before the next election.

And experts believe these failed prophecies are unlikely to change the views of the most faithful supporters.

“Shifting goal posts have defined the movement from the very beginning and I believe they will continue to,” Mr Feeld says.

“Weakened as it may appear from the outside, the alternate realities of QAnon won’t just go away,” says Sarah Hightower, an independent researcher and expert in conspiratorial movements.

“As long as there are still people holding on to those alternate realities, QAnon will continue to exist in some form.”