Home World USA Which Country is Leading the Race to Vaccinate? 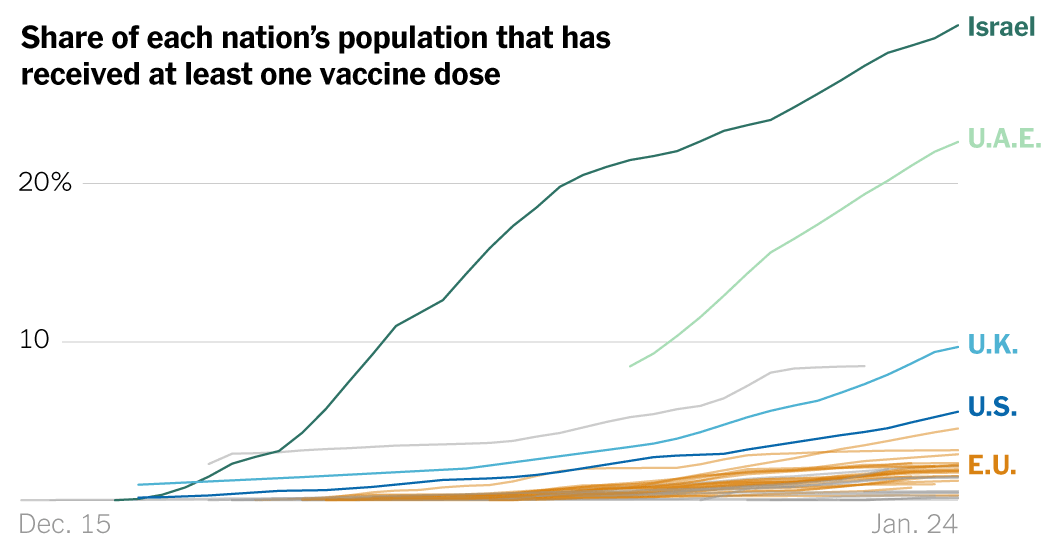 About 30 percent of Israelis have received at least one dose of a coronavirus vaccine, a rate that outpaces any other country. The United States is far behind, with about 6 percent of residents having received a vaccine dose, and countries in the European Union are off to an even slower start.

Note: Includes countries for which data is available.·Source: Our World in Data

The data on countries with a current vaccination campaign was compiled from government sources by Our World in Data. Many countries, particularly those in the developing world, where governments have struggled to procure vaccines, are not yet vaccinating residents at all.

Most countries are using vaccines from Pfizer-BioNTech or Moderna, both of which require two doses. Two of the countries with among the world’s highest vaccination rates, the United Arab Emirates and Bahrain, are also using a vaccine developed by the Chinese company Sinopharm, which has not been approved for use in the United States or the Europe Union.

The table below shows which countries have vaccinated their residents at the fastest rates since the start of their immunization campaigns, and which vaccinated the most in the last seven days. It also shows, at current speeds and immunization levels, how long it will take for at least half the residents in each country to receive at least one dose of a vaccine.

Speed of vaccinations by country

Note: Rates for the last week show the seven-day period from Jan. 17 to Jan. 24. If values were not available for both dates, the rate was calculated based on the nearest available date.·Source: Our World in Data

Israel, for example, will reach half its population with at least one dose of the vaccine in just four weeks at its current rate, though the vaccination campaign and the vaccinated rate excludes Palestinians in the occupied West Bank and blockaded Gaza Strip, who may have to wait several months for widespread distribution. Most European countries are months away from reaching Israel’s levels of vaccination.

Part of the disparity stems from when vaccines were approved in each country. Health authorities in the European Union approved the Pfizer vaccine 10 days later than their counterparts in the United States and nearly three weeks after U.K. officials.

And distribution lagged in some countries even after the vaccine was approved. The Netherlands, one of Europe’s richest countries, was the last in the European Union to begin its vaccination campaign — on Jan. 6, a week and a half after neighboring Germany and almost a month after the United Kingdom. The Dutch health minister attributed the delay to the need for proper preparations.

Europe’s slow vaccine rollout has been hampered by supply shortages, a lack of nurses and burdensome paperwork. Criticism of the European Union’s procurement strategy has grown louder as new variants of the virus threaten to take hold on the continent.

If Europe is moving slowly, almost all nations in the developing world are further behind, and in most of them, inoculations have not even begun. Wealthy countries have preordered more than half of the doses that could come to market by the end of the year, in many cases enough to vaccinate their populations several times over. Many poorer nations may be able to vaccinate one in five residents, at most, by then.