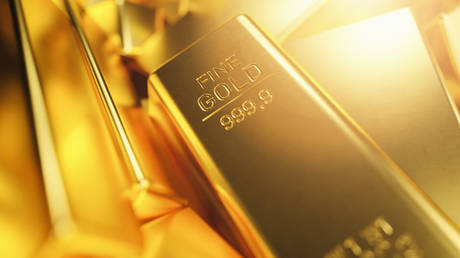 The price of gold reached a seven-week peak on Monday as a softer dollar and lower US Treasury yields lifted the precious metal’s appeal even as the appetite for riskier assets remained strong.

“The fact that we managed to break above $1,765 and close above on Friday is likely to have attracted some renewed speculative buying from trend and momentum players,” Saxo Bank analyst Ole Hansen was quoted as saying by Reuters.

“Most of these [players] are price-driven, so when the price tells them that there’s a change in the outlook, they have to get involved,” while fundamentally, gold is being driven by the continued drop in bond yields, Hansen added.

Also on rt.com
‘The world is going back to a GOLD STANDARD as the US dollar is about to collapse’ – Peter Schiff

Benchmark US 10-year Treasury yields edged lower towards the multi-week lows touched last week. The dollar index also dropped, to a more than six-week low against its rivals, making gold less expensive for other currency holders.

The dollar’s weakening and the Treasury yields retreat followed as the US Federal Reserve reiterated its view that any spike in inflation was likely to be temporary.