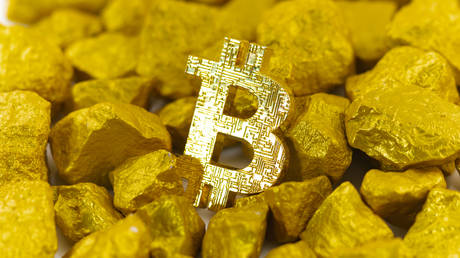 Gold may soon lose its status as the universal “store of value” to Bitcoin, US bank claims

Bitcoin may overtake gold’s market share in 2022, a Goldman Sachs analyst has said in a research note to clients, as cryptocurrencies and digital assets surge in price and attract increasingly more investor interest.

According to a list of 2022 predictions from the bank’s analyst Zach Pandl, Bitcoin will “most likely” acquire a bigger piece of the pie in the year to come than its current 20%, which was calculated by comparing the cryptocurrency’s $700 billion market capitalization to the roughly $2.6 trillion worth of gold in global investments.

“Bitcoin may have applications beyond simply a store of value – and digital asset markets are much bigger than Bitcoin – but we think that comparing its market capitalization to gold can help put parameters on plausible outcomes for Bitcoin returns,” Pandl wrote.

The term “store of value” refers to assets that are capable of retaining their worth for a long time without depreciating, like precious metals or certain currencies.
According to Coindesk data, Bitcoin was trading around $46,456 at approximately 2pm GMT on Wednesday. The globe’s largest cryptocurrency by market capitalization had a rough year in 2021, having plunged in price from around $60,000 in April down to near $30,000 in July, before reaching an all-time high of some $69,000 in November.

It’s struggled to surpass the $50,000 benchmark in the past few weeks after dropping sharply in December. Still, crypto-enthusiasts and market analysts are optimistic about the coin’s future, with many voicing predictions of Bitcoin hitting the long-awaited six-digit price sometime in 2022.