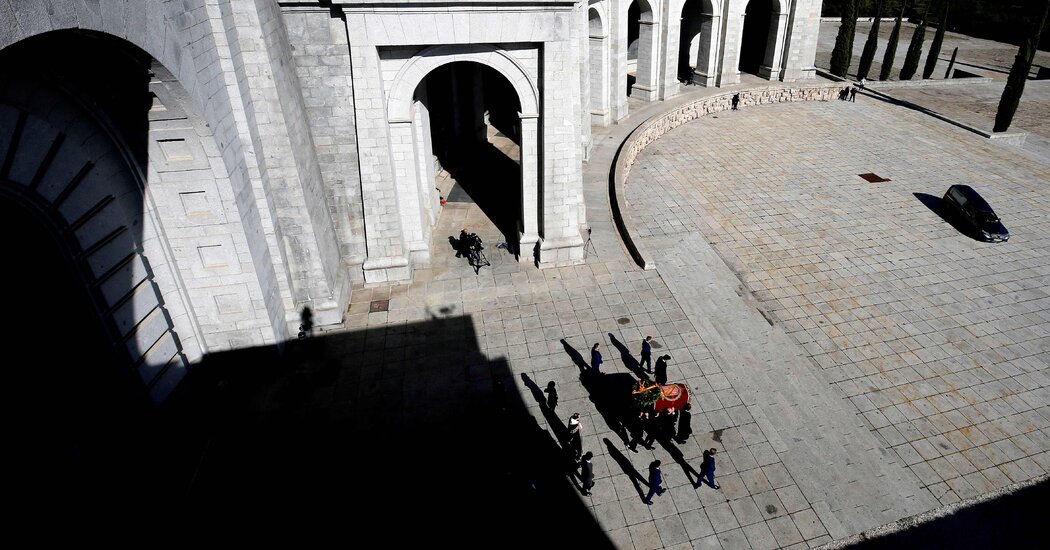 MADRID â€” Leftist politicians in Spain have worked slowly but steadily over the years to remove symbols commemorating the former dictator Gen. Francisco Franco from public spaces across the country.

Now, despite denouncing those efforts, their political opponents are trying to use the same law to persuade the authorities in Madrid to erase memorials to Francoâ€™s rivals.

This past week, city employees removed a plaque from the birthplace of Francisco Largo Caballero, a Socialist who became prime minister of the Republican government in 1936, a few months after Franco and other generals started a military coup that plunged Spain into a civil war.

Largo Caballero fled to France when Franco claimed victory in 1939. He was later arrested during the Nazi occupation and sent to the Sachsenhausen concentration camp. He died in exile in Paris in 1946. The plaque was taken down on Thursday â€” the 115th anniversary of his birth.

Juan E. PflÃ¼ger, spokesman for Vox, the far-right party behind the removal of the plaque, said the action was a warning to the leftist coalition leading the national government that the legislation, called the â€œlaw of historical memory,â€ should be abolished.

The â€œlaw of historical memoryâ€ was enacted in 2007 with the aim of condemning the Franco regime and forbidding the exaltation of leaders or symbols related to the military coup and the Spanish Civil War of the 1930s. The Spanish government used the same law last year to exhume Francoâ€™s remains from a basilica that he built outside Madrid.

Prime Minister Pedro SÃ¡nchez responded on Twitter that the warnings from Vox were â€œunacceptable.â€ He added: â€œLet us continue building a Spain worthy of those who fought so we could be what we are now: free.â€

Spain has long been bitterly divided about whether to stir the bones of its past, but the dispute has intensified since 2018, when Mr. SÃ¡nchez took office with a promise to revive the historical memory law that had been approved by a previous Socialist government and then ignored by a conservative administration. One of the measureâ€™s main goals is to help finance the opening of more than 2,000 mass graves across Spain.

Vox is pressing for the removal or alteration of monuments dedicated to Largo Caballero and another Socialist politician of the 1930s, Indalecio Prieto, including a boulevard named after Prieto on the outskirts of Madrid.

In a recent speech in the Madrid assembly, Javier Ortega Smith, a Vox lawmaker, said that the efforts were â€œnot revisionism, but putting an end to a historical lie.â€ He called the two politicians â€œsinister characters in our history that should not form part of the names of the streets and squares.â€

Vox argues that, far from deserving exaltation as defenders of democracy, both Socialists helped spark revolutionary unrest before the coup took place, and then joined a Republican government that allowed the summary executions of Fascist opponents once the war got underway.

More than 200 historians, from Spain and abroad, have signed a report forcefully rejecting Voxâ€™s account of the roles of Largo Caballero and Prieto in the 1930s.

Paul Preston, a British historian who signed the report and is a leading expert on the Spanish Civil War, said in an email that it was â€œmalicious and unfairâ€ to equate leftist politicians like Largo Caballero and Prieto with some of Francoâ€™s generals, whom he described as â€œmass murderers.â€

RamÃ³n Silva, a Socialist politician, said the city politics of Madrid had been â€œcontaminatedâ€ by the emergence of Vox, now the third-largest party in Spain. He noted that the plaque at Largo Caballeroâ€™s birthplace was erected in 1981, shortly after Spainâ€™s return to democracy, with the support of politicians from all parties.

Madridâ€™s city politics shifted last year, after elections that led to JosÃ© Luis MartÃ­nez-Almeida, a politician from the conservative Popular Party, taking over as mayor from Manuela Carmena, a leftist politician. Mr. MartÃ­nez-Almeida is running Madrid in coalition with Vox and Ciudadanos, a center-right party.

Since taking office, Mr. MartÃ­nez-Almeidaâ€™s administration has removed plaques from a Madrid cemetery memorial naming over 2,900 people killed under Francoâ€™s orders. The city government argued that the memorial should honor victims without identifying them or saying which side they supported in the civil war.

Opposition politicians in Madrid said they planned to challenge the removal of the Largo Caballero plaque in court.

Teresa Amor, a spokeswoman for the Socialists in Madrid, said the dispute showed that the country still needed to come to terms with its history.

â€œSpain has not healed the wounds of our past and also certainly needs to do a lot more homework about its Fascist dictatorship,â€ she said. â€œWe still have plenty of people who donâ€™t understand that winning a war is not the same as gaining legitimacy.â€

Most Americans have been wearing masks since spring, the C.D.C. says.

Are masks still required in Louisiana? Lawmakers say no. The governor says yes, and sues.

To combat the virus, some schools have moved classes outside.