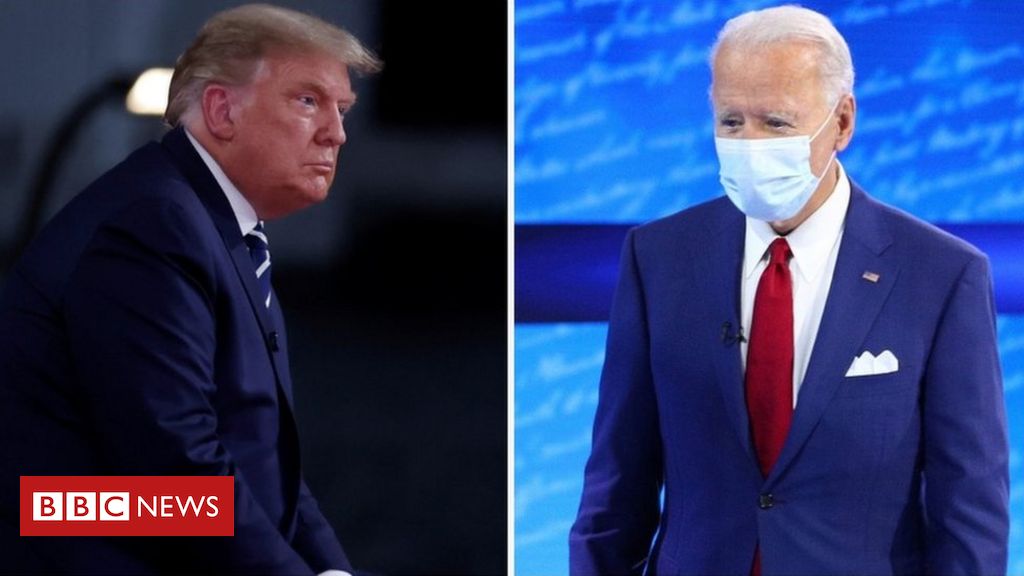 US President Donald Trump and his Democratic challenger Joe Biden have batted away key questions during separate meet-the-voter TV events.

Mr Trump, a Republican, declined to disavow a bizarre online conspiracy, while Mr Biden, a Democrat, would not divulge plans for the Supreme Court.

Both candidates were on the defensive at times on their records, Mr Trump for a range of issues and Mr Biden on race.

However, polling is still very close in several key states which could decide the election.

More than 18 million people have already voted in person or by post for the 3 November vote.

Thursday night’s town halls, as TV voter question-and-answer events are known in the US, replaced a cancelled second presidential debate. Mr Trump had refused to join that showdown virtually, following the recent Covid-19 diagnosis from which he now appears fully recovered.

What were the key moments for Trump?

During his primetime event hosted by TV network NBC in Miami, Florida, the president was asked about the QAnon conspiracy theory, whose adherents believe that Mr Trump is battling a clandestine network of elites, often involving Satanic plots and child trafficking.

When moderator Savannah Guthrie asked Mr Trump whether he would reject them, he replied: “I know nothing about QAnon.”

Ms Guthrie said she had just told him about the group, which has been labelled a potential terrorist threat by the FBI.

The president said: “I know nothing about it, I do know they are very much against paedophilia, they fight it very hard.”

Mr Trump instead turned his fire on antifa, a loose-knit movement of mainly far-left activists blamed by the US Department of Justice for civil disorder in American cities during racial justice protests over the last few months.

For the first time, the president said he would accept a peaceful transfer of power if he lost next month’s election, even as he expressed fears for the integrity of the vote. Federal election officials say there has been no evidence of widespread ballot fraud.

“And then they talk, ‘will you accept a peaceful transfer,'” Mr Trump said. “And the answer is, ‘Yes, I will.’ But I want it to be an honest election, and so does everybody else.”

Mr Trump deflected other questions about healthcare and tax returns and whether he took a coronavirus test on the day of his last debate with Mr Biden, saying: “Possibly I did, possibly I didn’t.”

The president spent much of the town hall arguing with the moderator, who disputed many of his statements.

But he beamed when one female voter prefaced her question by saying: “You’re so handsome when you smile!”

While the candidate events had the same format, that’s where the similarities ended.

President Trump’s evening was contentious. Moderator Savannah Guthrie peppered him follow-ups when he seemed evasive. The president was quicker on his feet and more congenial than during the first debate, but there’s no question he was once again playing defence.

Flip channels to the Biden town hall, and the tenor was subdued. Moderator George Stephanopoulos allowed the former vice-president to give long, sometimes circuitous answers. It had the feel of a public-interest talk show, complete with solemn readings from the US Constitution before commercial breaks.

Mr Trump’s forum made for more entertaining television – and almost certainly will have attracted more viewers. But that could be a blessing and a curse if what American voters want in November is something a little more, well, boring.

What were the key moments for Biden?

The Democrat demurred when asked during the ABC TV network’s town hall in Philadelphia whether he supported court packing, which would entail adding seats to the US Supreme Court and appointing justices to influence the ideological balance of its rulings.

Mr Biden has recently been ducking questions on the issue, leading conservatives to argue he is planning to tamper with the judiciary, which is the third branch of US government.

The former vice-president, who served under Barack Obama, gave conflicting answers again on Thursday night, at first saying: “I have not been a fan of court packing. I’m not a fan.”

But then moderator George Stephanopoulos asked Mr Biden whether he would be open to expanding the number of justices if Republicans confirmed Mr Trump’s current nominee for an existing vacancy on the nine-seat Supreme Court.

“I’m open to considering what happens from that point on,” he said, though he declined to reveal his stance on the issue.

“Depending on how they handle this,” he added, apparently referring to the expected Republican confirmation of Judge Amy Coney Barrett.

Mr Biden deflected again when asked whether his role in helping draft the 1994 crime bill, which the Black Lives Matter movement has blamed for mass incarceration of African Americans, was a mistake.

“It [the bill] had a lot of other things in it that turned out to be both bad and good,” he added.

Mr Biden hedged on whether he would make a future coronavirus vaccine mandatory.

“It depends on the state of the nature of the vaccine, when it comes out, how it’s distributed,” he said.

Another presidential debate on 22 October is still scheduled to take place, though it is unclear in what format. The first debate last month descended into insults between the two candidates.

What questions do you have about the US election?

In just three weeks, Americans head to the polls to cast their vote for Donald Trump or Joe Biden. What questions do you have for American voters? Submit your questions here and we’ll put them to our voter panel.

In some cases, your question will be published, displaying your name, age and location as you provide it, unless you state otherwise. Your contact details will never be published. Please ensure you have read our terms & conditions and privacy policy.

If you cannot see the form above, click here