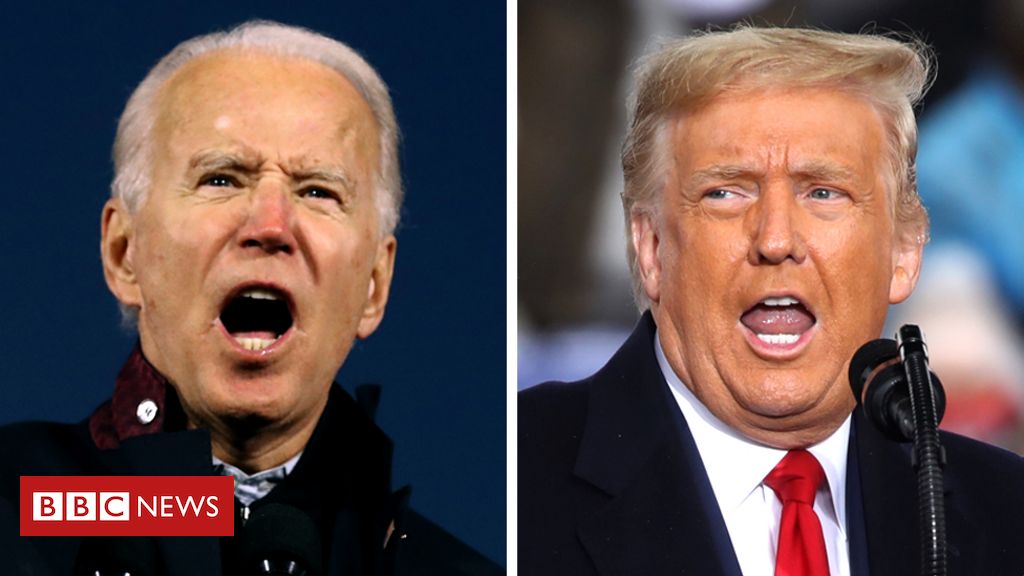 After months of bitter campaigning – and plenty of spin and distortion of the facts – the US election is drawing to an end.

We’ve been fact-checking the candidates throughout, and here is our selection from the final week of the campaign.

Donald Trump has been far more active on the campaign trail over the past few days, with a punishing schedule of rallies in key states.

There’s been no let-up of his repetition of false claims about the pandemic, his record in office and the integrity of postal voting.

Trump: You can change your vote in “most states”

Verdict: This is not correct. Only in a few states can you change your vote after you’ve submitted a postal ballot.

There are just a handful of states – including Michigan, Connecticut, Minnesota, New York and Wisconsin – where your postal vote can be cancelled after it has been submitted.

In these states, you can then either request a new postal ballot or vote in person.

Most states will allow you to vote in person if you’ve been sent a postal vote but haven’t returned it. Some of these ballots have to be counted last to make sure no-one votes twice.

Strongly Trending (Google) since immediately after the second debate is CAN I CHANGE MY VOTE? This refers changing it to me. The answer in most states is YES. Go do it. Most important Election of your life!

Biden: “Donald Trump crashed the economy that Barack and I left him. Like everything else he’s left and inherited, he squandered it.”

Verdict: Only after the onset of the pandemic did economic growth take a nose-dive. It has subsequently experienced a strong recovery.

The latest numbers show economic output surged by an annualised 33% in the third quarter of 2020, following a record fall as a consequence of the coronavirus pandemic.

However, the economy has not yet recovered to pre-pandemic levels.

Prior to the pandemic, during President Trump’s first three years in office, he oversaw an annual average growth of 2.5%.

The last three years of the Obama administration saw a similar level of growth (2.3%).

Mr Trump has said the recent recovery in growth is “the biggest in the history of our country by almost triple… that’s bigger than any nation”.

This isn’t right. Over the third quarter period (July-September) this year, the economy grew by 7.4% in the US (33.1% is the annualised figure). This is less than Germany, Italy and the eurozone as a whole.

If you look at economic growth from the start of the pandemic to the present, the US has done better than Europe but “worse that China and some other Asian economies” such as South Korea, says Neil Shearing, chief economist at Capital Economics.

Biden: “It’s estimated that if we wore masks the next few months, by his own experts in the CDC and other agencies… we’d save 100,000 lives.”

Verdict: The US Centers for Disease Control (CDC) does not make this projection, nor do others.

Mr Biden may have been referring to a projection, not by the CDC, but from the Institute for Health Metrics and Evaluation (IHME) at the University of Washington.

However, the 100,000 figure Mr Biden quotes is significantly above the IHME’s latest estimate that 62,000 lives would be saved by the end of January 2021, if mask-wearing was almost universal.

The CDC recommends that people wear masks in public settings, events and gatherings, to help stop the spread of coronavirus.

Verdict: This needs context. Joe Biden does want to end the cash bail system, but Mr Trump is wrong about its impact.

Joe Biden has pledged to end cash bail – the deposit a defendant pays to avoid being kept in detention while awaiting trial.

His website says: “The cash bail system incarcerates people who are presumed innocent.”

There are about 450,000 individuals currently detained before trial. However, a significant proportion of these are not given the option of bail – in particular those charged with serious crimes.

So Mr Trump’s figure of 400,000 is too high, say experts. And it’s also not correct to call all the people who can’t afford to pay bail “dangerous criminals”.

“Cash bail results in detention based on inability to pay. As a result, a low-risk indigent person may be detained and a high-risk wealthy person may be released,” says Prof Crystal Yang at Harvard University.

Verdict: This is true, according to a study.

The context for this claim is that Mr Biden has criticised big cuts in taxes under the Trump administration that have led to companies and wealthy individuals paying substantially less.

In 2018, 91 of the top 500 companies in the US effectively paid no tax, according to a report by the Institute on Taxation and Economic Policy.

Despite making almost $80bn in pre-tax income, some companies paid no taxes, as the US corporate tax code “lowers the bar for the amount of tax avoidance it takes to get you down to zero”, according to the Institute.