Home Economy US could â€˜change the worldâ€™ by devaluing the dollar â€“ hedge fund... 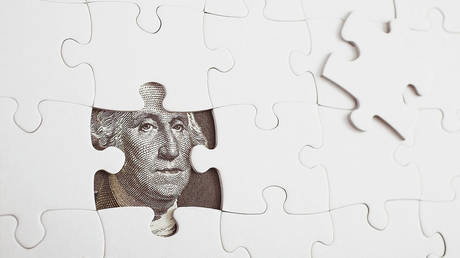 There is a shortage of dollars in the global market, according to independent market adviser Hugh Hendry. He says US should look at the value of the national currency, instead of targeting bonds as a form of economic stimulus.

In an interview with CNBC, Hendry said that quantitative easing programs, where central banks buy assets like government bonds to inject liquidity into the economy, are not working.

â€œQuantitative easing â€“ weâ€™re being missold something,â€ Hendry argued. â€œSimply publishing or expanding these inert central bank reserves and trying to scare us all to death that theyâ€™re actually printing real money is a fraud.â€

â€œSo, if youâ€™re going to impose a dollar standard on the world, you have to stand by and provide sufficient liquidity. And thatâ€™s actually where theyâ€™ve been failing.â€

Also on rt.com
Demand for US dollar as worldâ€™s reserve currency â€˜seems to be waningâ€™ â€“ Deutsche Bank

According to Hendry, the widespread sell-off in March, where global markets plunged amid the coronavirus pandemic, was partially due to investors having to sell assets in order to create dollars and repay debt.

Hendry then suggested an alternative approach to support the economy, saying: â€œIn terms of stopping these periodic dramatic flares, would it not be better to target not bond prices, but instead to target the actual value of the dollar?â€

Hendry explained: â€œWhen I look at the world of macro, I think itâ€™s telling us that we need a lower print on the dollar itself. I think we need the Treasury, and not the Fed, to step up to the plate and tell the world â€˜weâ€™re going at target 70 or 60 on the dollar index.â€™ That would change the world.â€