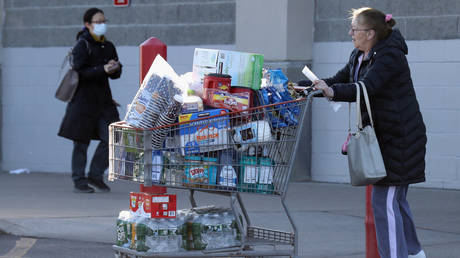 Consumer prices in the United States surged 5% in May from a year ago, accelerating at their fastest pace in nearly 13 years, the Labor Department said on Thursday.

The consumer price index (CPI) represents a basket including food, energy, groceries, housing costs and sales across a spectrum of goods. Economists surveyed by Dow Jones had been expecting a price spike of 4.7%.

That’s the biggest CPI gain since the 5.3% increase in August 2008, just before the financial crisis sent the United States into the worst recession since the Great Depression.

Also on rt.com
‘Once the inflation genie is out of the bottle, you can’t get it back in’ – Max Keiser

“The strength in the top line indices was driven largely by categories that have been heavily disrupted by Covid and remain under pressure from supply chain disruptions,” senior economist at Alliance Bernstein, Eric Wingorad, was quoted as saying by CNBC.

“The more persistent categories of inflation — the ones that do a better job of capturing the sustainable trend — are significantly more subdued,” he said, adding “That means that the details of today’s print continue to support the idea that the spike in inflation is transitory, even if it is more intense than most forecasters (myself included) would originally have anticipated.”