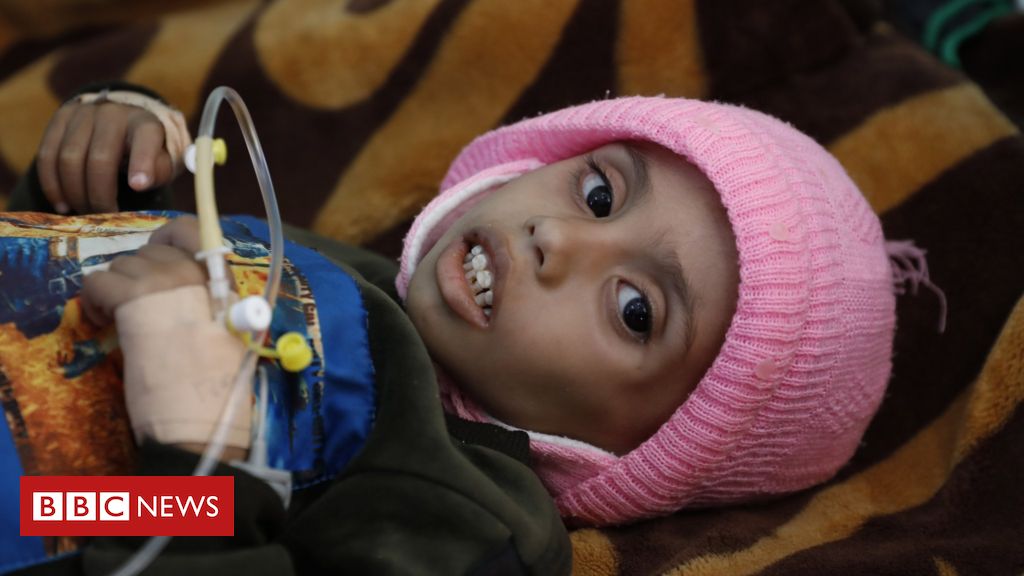 The US plan to designate Yemen’s rebel Houthi movement as a terrorist group is likely to trigger a “famine on a scale that we have not seen for nearly 40 years”, the UN’s aid chief has said.

Mark Lowcock told the UN Security Council issuing licences for imports of key supplies for rebel-controlled areas would not prevent such a disaster.

About 50,000 Yemenis are already “starving to death in what is essentially a small famine”, he warned.

Five million more are near starvation.

The executive director of the World Food Programme, David Beasley, said: “We are struggling now without the designation. With the designation, it’s going to be catastrophic.”

“It literally is going to be a death sentence to hundreds of thousands, if not millions of innocent people in Yemen.”

Yemen has been devastated by a conflict that escalated in 2015, when the Iran-aligned Houthis seized control of large parts of the country and a Saudi-led coalition of Arab states supported by the US launched a military operation to restore President Abdrabbuh Mansour Hadi’s rule.

The fighting has reportedly left more than 110,000 people dead and triggered what the UN says is the world’s worst humanitarian crisis, with 80% of the population in need of aid or protection.

On Sunday, US Secretary of State Mike Pompeo notified Congress of his intention to designate the Houthis as a Foreign Terrorist Organisation (FTO) on 19 January – the day before President Donald Trump leaves office.

Mr Pompeo said the aim was to hold the group accountable for “its terrorist acts, including cross-border attacks threatening civilian populations, infrastructure and commercial shipping”.

Houthi leader Mohammed Ali al-Houthi accused the Trump administration of terrorism and said the movement reserved the right to respond to any designation.

Mr Pompeo said the US recognised the concerns of aid groups operating in areas under Houthi control, where the bulk of the population lives, and would work to reduce the impact on what he called “certain humanitarian activity and imports into Yemen” by issuing licences and exemptions.

But before Thursday’s UN Security Council briefing, Mr Lowcock tweeted: “The US designation of the Houthis as a foreign terrorist organisation could be the final straw that tips Yemen into not just a small famine, but a truly huge one.”

What is a famine?

Under an expert classification system, a famine is declared in an area when three thresholds of food insecurity, acute malnutrition and mortality are together all breached. They are:

The under-secretary general for humanitarian affairs told the 15-member body that the measures outlined by Mr Pompeo would not prevent a famine in a country that imported 90% of its food and where an estimated 16 million people were already going hungry.

“What would prevent it? A reversal of the [US] decision,” he said.

Mr Lowcock noted that almost all of Yemen’s food was brought in through commercial channels, and that aid agencies gave people vouchers or cash to buy it in the market.

Some suppliers, banks, shippers and insurers were already telling their Yemeni partners that they “now plan to walk away from Yemen altogether”, according to Mr Lowcock.

“They say the risks are too high. They fear being accidentally or otherwise caught up in US regulatory action which would put them out of business or into jail.”

Traders hoping to continue operating estimate that costs could go up by 400%, which would make the food too expensive for many Yemenis.

US President-elect Joe Biden could reverse the decision after he takes office next week. However, it would require a lengthy legal review and could be blocked by Congress.

A Biden transition official told Reuters news agency that it was reviewing “last-minute manoeuvres” by the Trump administration and would “render a verdict based exclusively on one criterion: the national interest”.