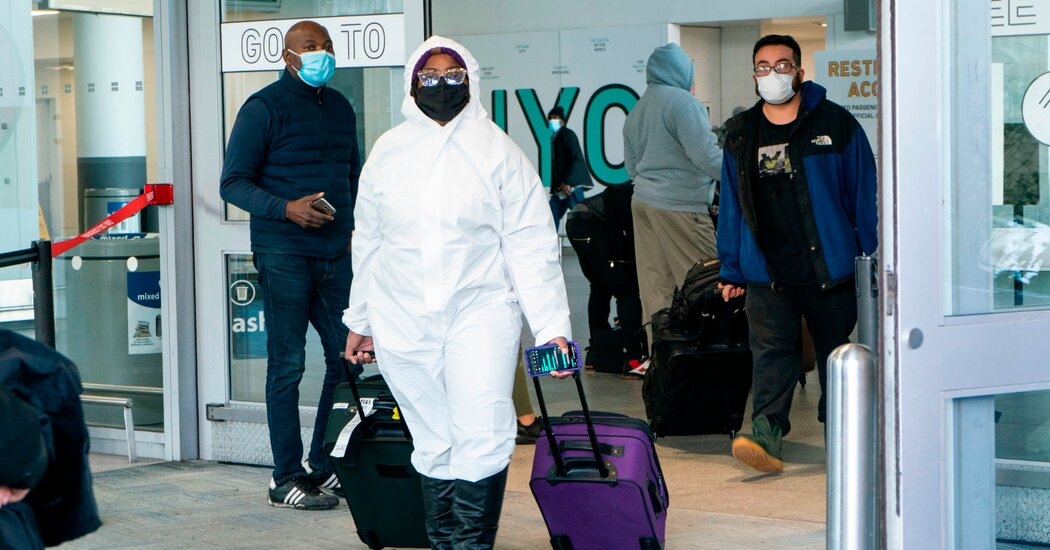 Before boarding their flights, all international passengers headed to the United States will first need to show proof of a negative coronavirus test, according to a new federal policy going into effect on Jan. 26.

“Testing does not eliminate all risk,” Dr. Robert R. Redfield, the director of the Centers for Disease Control and Prevention, said in a statement describing the new policy.

“But when combined with a period of staying at home and everyday precautions like wearing masks and social distancing, it can make travel safer, healthier, and more responsible by reducing spread on planes, in airports, and at destinations.”

Dr. Redfield is expected to sign the order detailing the new rules on Tuesday.

The new policy requires all air passengers, regardless of vaccination status, to get a test for current infection within the three days before their flight to the United States departs, and to provide written documentation of their test results or proof of having recovered from Covid-19.

Proof of immunization will not be sufficient, because the vaccines have only been shown to prevent serious illness, said Jason McDonald, a spokesman for the C.D.C. Vaccinated people may still become infected, in theory, and transmit the virus on a flight.

The agency will not require further testing in the three months after a positive test, so long as the traveler has not had any symptoms. In this situation, a passenger may travel with documentation of the positive test result and a letter from a health care provider or a public health official stating that the traveler now has been cleared for travel.

Airlines must confirm the negative test result for all passengers or the documentation of recovery before they board. If a passenger does not provide proof of a negative test or recovery, or chooses not to take a test, the airline must deny boarding to the passenger, the agency said.

“Testing before and after travel is a critical layer to slow the introduction and spread of Covid-19,” agency officials said in a statement. “With the U.S. already in surge status, the testing requirement for air passengers will help slow the spread of the virus as we work to vaccinate the American public.”

The policy expands on a similar rule, implemented in late December, that required travelers from Britain to show proof of a negative result on a test for the virus. The Trump administration introduced that restriction following reports that a more contagious variant of the coronavirus had become the source of the majority of infections in much of that country.

That variant has since been detected in several American states and is likely to have spread even more widely, scientists have said. The United States genetically sequences only a tiny proportion of its virus samples, however — too few to have an accurate estimate for the variant’s spread in this country.

The new travel policy comes on the heels of an announcement by the Japanese government on Tuesday that four travelers from Brazil had imported another new variant of the virus into Japan. Two other so-called variants of concern are said to be circulating in South Africa and in Brazil.

Confused by the terms about coronavirus testing? Let us help:

The White House coronavirus task force and federal agencies, including the C.D.C., have been debating the expanded requirements for weeks.

The C.D.C. currently recommends that all air travelers, including those flying within the United States, get tested one to three days before travel, and again three to five days after the trip is complete.

Many airlines offer optional testing for passengers, but mandate it only when destinations require them to do so. But last week, a group representing major U.S. airlines backed a policy that would require all passengers to get tested.

In a statement, United Airlines welcomed the move, saying testing is “key to unlocking international borders.”

“United already has procedures in place to comply with similar orders for international jurisdictions, and we will plan on expanding those in light of this new mandate,” the airline said in a statement.

“Additionally, United is actively working to introduce new technologies and processes to make navigating these testing requirements easier both for our employees and our customers.”