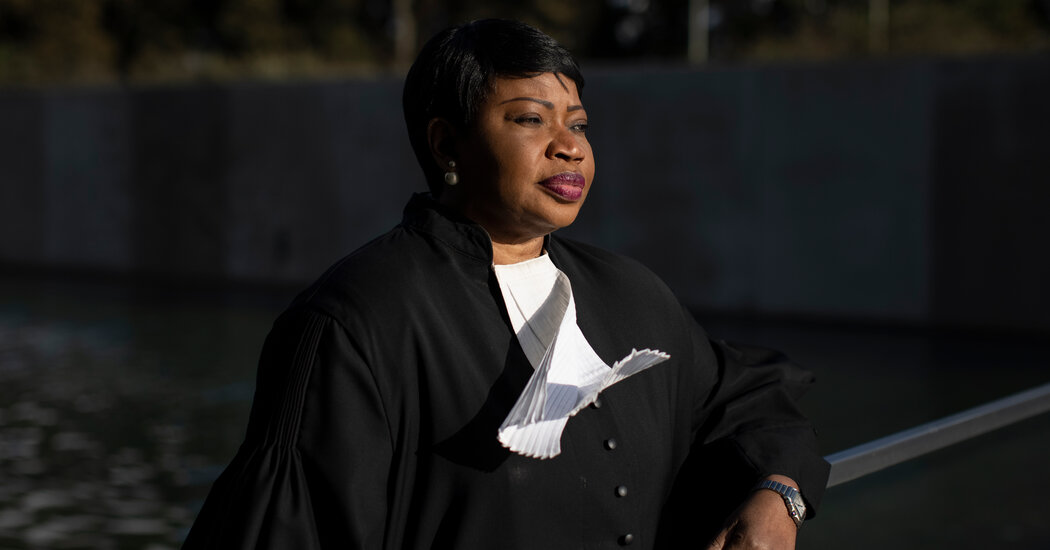 On Sept. 2, he took to the lectern and called the International Criminal Court â€” which investigates war crimes, crimes against humanity and genocide â€” a â€œthoroughly broken and corrupted institution.â€ Then he announced sanctions on the tribunalâ€™s chief prosecutor, Fatou Bensouda, and a colleague, trying to stop their inquiry into potential war crimes by American forces in Afghanistan.

His measure enraged European allies, human rights activists and even some retired American generals. Many were angry that the Trump administration aimed economic penalties meant for warlords, dictators and authoritarian governments at a human rights lawyer.

â€œIt definitely is quite unprecedented,â€ Ms. Bensouda said in an interview. â€œThese are the kind of sanctions that we normally reserve to be used as a mechanism to target narcotic traffickers, notorious terrorists and the like. But not professional lawyers, not prosecutors, not investigators, not judges or others who are working tirelessly to prevent atrocity crimes.â€

The Trump administration has said that since the United States is not a member of the Hague-based international court, Ms. Bensouda does not have the authority to look into American activities abroad. Mr. Pompeo has denounced its inquiries as â€œillegitimate attempts to subject Americans to its jurisdiction.â€ The courtâ€™s appeals chamber has issued a ruling disputing that.

Many diplomats and experts on sanctions policy also said Mr. Trumpâ€™s use of such punishment against the I.C.C. not only weakened the countryâ€™s moral standing, but also revealed a troubling trend: The Trump administration has transformed economic sanctions, one of the governmentâ€™s most effective foreign policy tools, in ways that have alienated close allies.

â€œItâ€™s atrocious,â€ said Daniel Fried, the State Departmentâ€™s coordinator for sanctions policy in the Obama administration. â€œIt creates the reality, not just the impression, of the United States as a unilateralist bully with contempt for international law and norms.â€

Immediately after Mr. Pompeoâ€™s announcement, Ms. Bensouda said she learned that her bank account at the United Nations Federal Credit Union had been frozen. Her relatives also found their assets temporarily blocked, she added, even though they were not targets of the action.

Ms. Bensouda became the subject of sanctions because of her investigation of potential war crimes committed by American troops and intelligence officials in Afghanistan â€” although the case largely focuses on whether Afghan forces and the Taliban carried out any crimes. She also drew ire for wanting to investigate alleged Israeli war crimes in the West Bank and the Gaza Strip.

Mr. Pompeo has called her Afghan investigation an attack on American sovereignty. Prime Minister Benjamin Netanyahu of Israel has described her examination of Israeli actions as â€œpure anti-Semitism,â€ even though she said she intended to also examine Palestinian wrongdoing. Israel, like the United States, is not a member of the I.C.C.

Ms. Bensouda said such criticism was â€œcertainly politically motivated.â€ She said that her work was allowed under the courtâ€™s founding treaty, and that she was not trampling on the sovereignty of the United States or Israel. Afghanistan is a member of the court. In 2015, the Palestinian Authority accepted the courtâ€™s jurisdiction. (The prosecutor is responsible for investigating and prosecuting alleged war crimes and atrocity crimes in a member country when no other national authority is willing or able to do this credibly, the treaty states.)

â€œWe are a court of law, we do not do politics,â€ she said. â€œWe have no agenda other than to honorably fulfill our mandate.â€

The American sanctions on the I.C.C. prompted swift condemnation at home and abroad. Critics demanded that Mr. Pompeo explain his unsubstantiated charge of corruption. The European Unionâ€™s top diplomat called the action â€œunacceptable and unprecedented.â€ The German foreign minister said the sanctions were a â€œserious mistake.â€

Washington has had tense relations with the court, and tried to undermine and block it since it opened in 2002. The Obama administration began to cooperate quietly in some cases. Yet despite dismissing the court in the past, the United States had never gone this far.

Critics of the sanctions say the action also followed a pattern the Trump administration has embraced when issuing these punishments: levying them unilaterally and often over the fierce objection of allies.

â€œThereâ€™s a delicate balance between using sanctions in a way that protects national interests while ensuring buy-in from key partners,â€ said Eric Lorber, formerly a senior adviser to the under secretary for terrorism and financial intelligence in the Trump administration. â€œStriking that balance has been a challenge for this administration.â€

American sanctions have grown in popularity since 2001. Presidents of both political parties have found them useful in achieving foreign policy objectives without committing American troops to battle.

As of October, Mr. Trump has imposed over 3,700 sanctions on foreign governments, central banks, authoritarian governments and malign actors, according to experts at the law firm Gibson, Dunn & Crutcher. By comparison, President Barack Obama authorized slightly over 2,000 during his first term. President George W. Bush approved over 1,800 from 2001 to 2004, the law firm found.

But Mr. Trumpâ€™s sanctions strategy has achieved little success, critics said. Economic penalties against Iran have brought the country no closer to negotiating an end to its nuclear program. President Bashar al-Assad of Syria and President NicolÃ¡s Maduro of Venezuela remain firmly in power, despite the administrationâ€™s attempts to use sanctions to topple them.

Asked if the sanctions will deter her from looking further into American and Israeli actions, Ms. Bensouda said: â€œBluntly, no. This will not deter us. This will not stop us. We will continue to do our work.â€

Julia Friedlander, a sanctions official at the Treasury Department who left in June, said the unilateral actions undertaken by the Trump administration upset allies, who believe, â€œâ€˜You donâ€™t really care what we think about this, do you? You donâ€™t care what the impact is going to be in our economy.â€™â€ She added, â€œTheyâ€™re completely, politically anathema to what our allies would do.â€

The idea to penalize Ms. Bensouda started with John R. Bolton, the former national security adviser who has criticized the court since its inception. In 2018, he threatened sanctions against it, saying that Ms. Bensoudaâ€™s investigation into potential U.S. and Israeli war crimes was an â€œunjust prosecutionâ€ and that he wished to â€œlet the I.C.C. die on its own.â€

Though Mr. Bolton left the Trump administration in 2019, the idea to punish the court remained. That same year, Ms. Bensouda was barred from traveling to the United States except when on business with the United Nations.

This June, Mr. Trump signed an executive order authorizing sanctions on individuals employed by the International Criminal Court. In September, Ms. Bensouda and her colleague Phakiso Mochochoko were named.

Beyond the sanctions on the tribunal, the Trump administrationâ€™s use of such penalties has caused unintended blowbacks, no more evident than in its strategy toward Iran.

Renewed American sanctions on Tehran have driven Iran and China closer together. In July, The New York Times reported that the countries are negotiating an economic and military partnership that would defy U.S. sanctions and expand Chinaâ€™s telecommunications, banking and infrastructure presence in the region. China would receive a regular and discounted supply of oil for the next 25 years.

Unilateral sanctions on Iran have stirred such anger that European allies have created a financial mechanism that would allow goods to be traded between Iranian and foreign companies without using the dollar. The European company, Instex, is nascent, but in March a German exporter shipped over 500,000 euros, or about $586,000, in medical supplies to Iran using this system, paving a way for future transactions that could defy American sanctions and mean greater pain for the American financial system.

â€œRight now, the U.S. banking system is supreme because a lot of transactions route through U.S. dollars and route through New York,â€ said Richard Nephew, a senior research scholar at Columbia University. â€œWeâ€™re in the billions of lost economic value to the U.S. that potentially go away if you have people go to an alternative system that doesnâ€™t involve us as much.â€

Human rights scholars acknowledge that the Trump administration has done well in targeting a number of human rights abusers through economic sanctions.

In 2017, Mr. Trump issued an executive order expanding the authority of the Global Magnitsky Act, passed in 2016, which allows asset freezes and travel bans on human rights abusers. To date during the Trump administration, the government has penalized 214 individuals or entities from 27 countries for human rights atrocities using the act, targeting places like China, Myanmar, Nicaragua and the Democratic Republic of Congo, Human Rights First, an advocacy group, found.

Still, there are glaring omissions. Although the Trump administration imposed sanctions on 17 individuals involved in the premeditated killing of the Washington Post columnist Jamal Khashoggi, Crown Prince Mohammed bin Salman of Saudi Arabia was spared, although U.S. intelligence agencies had concluded that he was likely involved.

Despite the sanctions, Ms. Bensoudaâ€™s investigations have not stopped. In March, Ms. Bensouda received approval from the courtâ€™s appeals judges to proceed with her inquiry in Afghanistan. Since then, she has accepted a request from government officials there to show, for now, that they can render justice and prosecute potential war criminals on their own. If she is not satisfied with their action, she said she could move forward with her inquiry.

Even American military leaders have said the Trump administrationâ€™s decision to wage war on international institutions like the International Criminal Court will do harm, not just to future sanctions campaigns, but also to the United Statesâ€™ standing.

â€œItâ€™s very dangerous, and it weakens the United States to disrespect international institutions that are promoting law and order,â€ said Wesley Clark, the retired four-star Army general and former NATO commander. â€œIt puts us on the same plane as Russia, China, Iran and North Korea. Itâ€™s not where we want to be.â€