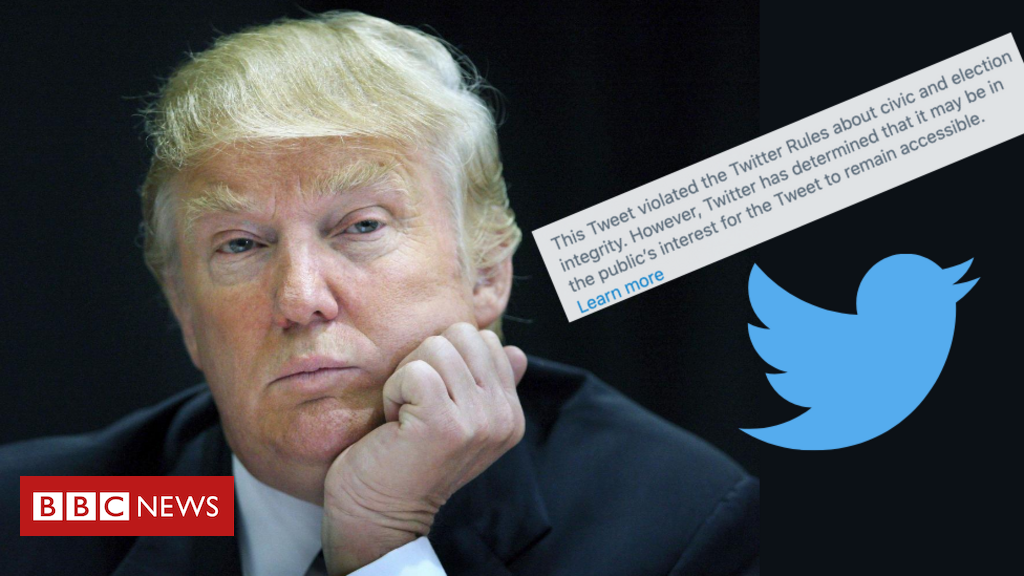 Twitter has hidden a tweet by Donald Trump for containing “misleading claims” that could “dissuade voters” ahead of the November election.

The US president tweeted on Sunday postal voting could encourage fraud and puts users at risk of contracting coronavirus.

The tweet can be viewed behind a disclaimer that says it breaks rules around “civic and election integrity”.

“So now the Democrats are using mail drop boxes, which are a voter-security disaster,” the president tweeted.

“Among other things, they make it possible for a person to vote multiple times.

“Also, who controls them? Are they placed in Republican or Democrat areas? They are not Covid sanitised – a big fraud.”

The social-media giant later put a warning on the tweet, and said: “We placed a public interest notice on this tweet for violating our civic-integrity policy for making misleading health claims that could potentially dissuade people from participation in voting.”

The same post remains unaltered on Facebook, with no warning, but includes a link to additional voting information.

A surge in postal ballots is expected in the election, due to the coronavirus outbreak.

But there is little evidence this method of voting leads to widespread fraud.

“You may not use Twitter’s services for the purpose of manipulating or interfering in elections or other civic processes,” Twitter added.

“This includes posting or sharing content that may suppress participation or mislead people about when, where, or how to participate in a civic process.”

Twitter rules also state severe or repeated violations can lead to permanent suspension on the site.

And in June, another of his tweets was deemed to have violated rules against abusive behaviour.

The reaction of social-media sites to unfounded claims made by Donald Trump about mail-in voting is quickly becoming a staple theme of this year’s presidential election.

It’s something Twitter and Facebook have had to do before and will no doubt do again in the weeks leading up to polling day, in November.

But the speed and decisiveness of their action raises big questions about whether social-media sites will succeed in battling election misinformation in the coming weeks.

Twitter took five hours to act, meaning the president’s claims accumulated thousands of retweets and “likes” before a label appeared explaining the tweet broke the site’s rules on election integrity.

Meanwhile, Facebook’s labels on the post just point users to more information on voting – as opposed to offering any kind of fact check.

One concern is these unfounded claims about fraudulent voting could slowly and steadily undermine the legitimacy of the election result – and a slowness to act to label or remove these claims simply contributes to that problem.