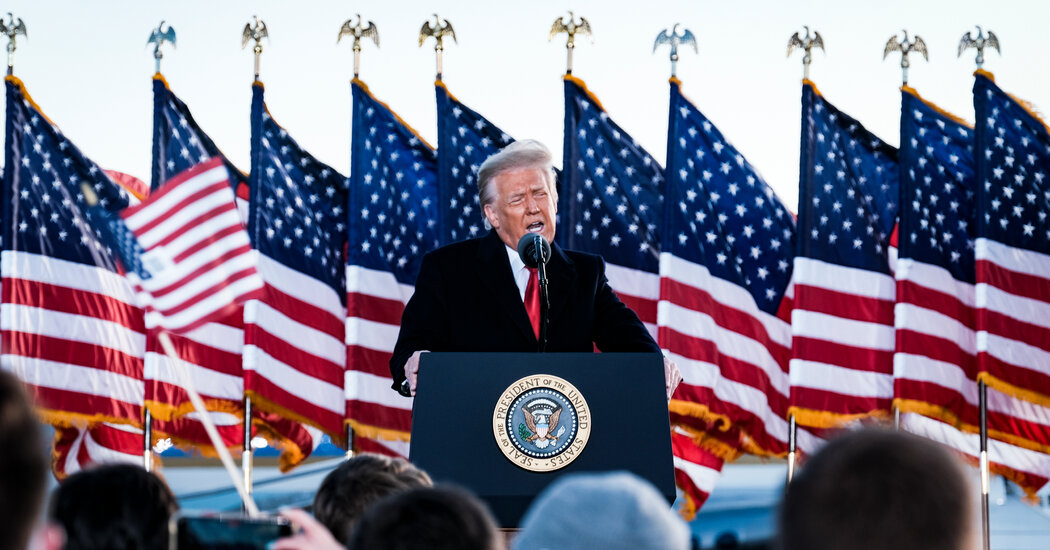 The Trump administration cast its barrage of moves against Beijing, in its waning days, as necessary to stand up to Chinaâ€™s authoritarian leadership.

Among its final acts, the administration declared that Beijing was committing genocide against Uighurs and other Muslims in a far western region. It held a video conference between a senior United States envoy and the president of Taiwan, the self-ruled island claimed by Beijing. And it jettisoned longstanding guidelines limiting exchanges with Taiwanese officials.

But the decision to push through significant foreign policy measures so quickly â€” and during a time of turmoil in Washington â€” risks politicizing the issues and undermining their ability to gain global traction.

While some of the decisions were in the making for months, the timing of their rollout makes them easy to dismiss. To Beijing, the moves were a last-ditch effort by the departing administration to needle Chinaâ€™s ruling Communist Party. And they could potentially box in President Biden by forcing him to either look weak on China by reversing the moves, or incur Beijingâ€™s wrath.

The moves were welcomed by many Taiwanese, Uighurs and other communities whom the Trump administration had said it wanted to support. But some expressed concerns that they â€” and their causes â€” were being overshadowed by geopolitics.

â€œThere are many people who suspect the legitimacy of this decision,â€ Tahir Imin, a Uighur activist based in Washington, said after the United States declared that Chinaâ€™s repression of his ethnic group amounted to genocide. â€œBut all of the facts show clearly that what is happening is a genocide.â€

In the short term, the Trump administrationâ€™s moves may force the issues to the front of Mr. Bidenâ€™s China agenda, regardless of his own priorities. This complicates the new administrationâ€™s plans to maintain a combative stance on China over human rights and other issues while finding areas to cooperate and stabilize Washingtonâ€™s spiraling relationship with Beijing.

Beijing is likely to pressure Mr. Biden to reverse at least some of the Trump administrationâ€™s decisions as a condition of resuming talks on other issues. But reversing any decision too quickly could also send a signal to the Chinese leadership that all of the recent moves are on the table.

Mr. Biden has advocated remaining tough on China. He called Chinaâ€™s human rights abuses in Xinjiang â€œgenocideâ€ during the election campaign. And Antony J. Blinken, his pick for secretary of state, said on Tuesday that he agreed with Mike Pompeoâ€™s move in his final days in that role to declare that Chinaâ€™s repression of the Uighurs constituted genocide.

But the Biden administration has said it will first focus on domestic priorities. There may not be bandwidth to maintain the confrontation with China that the Trump administration set in motion, targeting areas like trade, technology and security.

â€œBecause all of what has happened with the Trump administration, particularly with the last set of actions, the Chinese are going to want greater predictability,â€ said Bonnie S. Glaser, a senior adviser for Asia at the Center for Strategic and International Studies in Washington. â€œThey are going to ask for more concrete commitments from the Biden administration.â€

Faced with the last-minute barrage from Washington, Beijing has so far demonstrated relative restraint.

In recent weeks, the Chinese state media had dismissed Mr. Pompeo as â€œcrazyâ€ and the â€œworst secretary of state in history.â€ On Wednesday, the Global Times, a state-backed nationalist tabloid, relayed comments from Chinese internet users mocking then-President Trump as a â€œgravedigger of U.S. hegemonyâ€ and â€œthe first U.S. president to successfully entertain Chinese people while wreaking havoc on the U.S. at the same time.â€

â€œThe lies and poison that Pompeo has spread over these years will inevitably be swept along with him into the garbage heap of history,â€ Hua Chunying, a foreign ministry spokeswoman, said at a regularly scheduled news briefing on Wednesday.

Minutes after Mr. Biden was sworn in, the Chinese foreign ministry announced that it was imposing sanctions on Mr. Pompeo and 27 other Americans â€” mostly Trump administration officials â€” for having â€œseriously violated Chinaâ€™s sovereignty.â€ Those sanctioned include many of the Trump administrationâ€™s top China hawks, like Peter Navarro and Matthew Pottinger.

In addition to prohibiting the 28 Americans and their family members from entering the mainland, Hong Kong and Macau, the foreign ministry also said it was restricting the named individuals, and companies and institutions associated with them, from doing business with China.

A spokeswoman for President Bidenâ€™s National Security Council told Reuters on Wednesday that the sanctions were â€œunproductive and cynicalâ€ and urged Americans from both parties to condemn the move.

Despite the rocky start, it remains to be seen whether Beijing will take a confrontational or cooperative approach toward the Biden administration.

Beijing has made overtures to Mr. Biden, calling for a reset and greater cooperation between the two countries. But it has also spread new conspiracy theories connecting an American military lab to the coronavirus and pushed a nationalistic message that in the face of global challenges, â€œtime and momentum are on Chinaâ€™s side.â€

An editorial published on Sunday in the Global Times called on Mr. Biden to â€œactively consider abolishing all the diplomatic decisions made by the previous administration in its recent surprise attack.â€

Shi Yinhong, a professor of international relations at Renmin University in Beijing, said in a telephone interview that â€œChina will want to know which actions are set in stone, which actions have some hope to be mitigated and which actions can be reversed.â€

The Chinese government is likely to pressure the Biden administration to reinstate a set of guidelines meant to restrict interactions between American officials and their Taiwanese counterparts. The guidelines had been in place since the United States broke off ties with Taiwan in 1979 and shifted diplomatic recognition to Beijing.

Mr. Pompeoâ€™s move to lift the rules this month â€” which some officials suggested had been done without proper review â€” looked more like an effort to challenge Mr. Biden to defy China regardless of the potential risks to Taiwan. The move was welcomed by many Taiwanese officials, but Tsai Ing-wen, Taiwanâ€™s president, who has called for talks with Beijing and is wary of escalating tensions, has not spoken publicly on the issue.

The shift â€œis designed to antagonize China,â€ said Drew Thompson, who was the Pentagonâ€™s director for China from 2011 to 2018 and is now a research fellow at the Lee Kuan Yew School of Public Policy in Singapore. â€œItâ€™s emotional â€”Â itâ€™s not objectives-based. Itâ€™s not based on the mutually beneficial interests of Taiwan and the U.S.â€

Mr. Biden could initiate a review of the restrictions and reinstate some of them, if necessary. But doing so would risk upsetting Taiwan and drawing criticism at home on an issue that enjoys bipartisan support.

Critics also point to the recent announcement of a planned visit to Taiwan by an American official as evidence that the Trump administrationâ€™s final moves to support the island were made in large part to spite Beijing.

Officially, the purpose of the visit by Kelly Craft, the United States ambassador to the United Nations, was to bolster Taiwanâ€™s efforts to be included in international agencies, which China opposes. But Mr. Pompeo announced Ms. Craftâ€™s visit at the end of a statement lambasting China for the arrest of dozens of pro-democracy figures in Hong Kong, effectively wedging Taiwanâ€™s interests into an ongoing dispute between Washington and Beijing.

The trip was later canceled and replaced by a phone call with Ms. Tsai.

â€œIt feels like we have been made a bargaining chip between two great powers, which has put us in a very unstable and unsafe situation,â€ Ma Wen-chun, a lawmaker from the Kuomintang, a Taiwanese opposition party, said in a telephone interview before the visit was canceled.

The departing administrationâ€™s efforts to punish China over its mass human rights abuses against Uighurs and other Muslim ethnic minorities in Xinjiang were similarly tainted by concerns about political motivations.

Although the administration imposed sanctions, blacklisted Chinese companies and banned all imports of cotton and tomatoes from the region, internal divisions over the issue were often laid bare. Mr. Pompeo pushed for tough measures to punish China for its mass internment of Uighurs, but Mr. Trump resisted because he didnâ€™t want to jeopardize trade talks with Beijing.

For many Uighurs overseas, the administrationâ€™s decision on Tuesday to declare the situation in Xinjiang a genocide could not have come soon enough. The designation could pave the way for further sanctions or draw support from other countries.

Yet some Uighur activists expressed concerns that the move would appear purely political and that the Trump administrationâ€™s damaged global credibility could undermine the cause. Others said they were hopeful that Mr. Bidenâ€™s promise to strengthen alliances could help put more pressure on Beijing over its human rights abuses.

â€œWhat we really want to see is tangible action,â€ said Rushan Abbas, an activist in Herndon, Va., whose sister, Gulshan, was recently sentenced to 20 years in prison in Xinjiang. â€œNot just lip service.â€