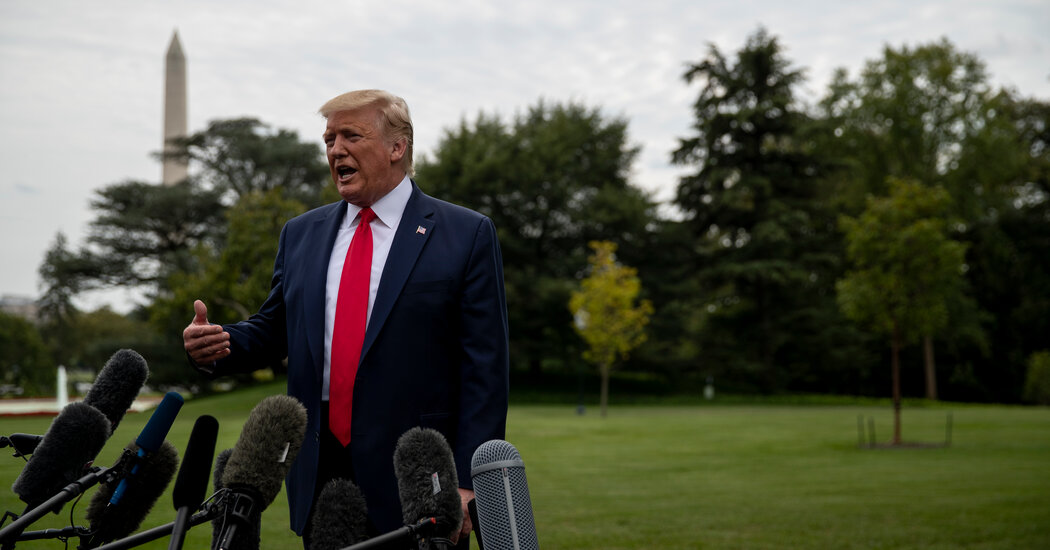 WASHINGTON â€” Days before the anniversary of the Sept. 11, 2001, attacks two years ago, President Donald J. Trump had a novel idea. He would invite leaders of the Taliban, the group that harbored Osama bin Laden in Afghanistan as the founder of Al Qaeda plotted his strikes on America, to join peace negotiations at the Camp David presidential retreat in Maryland.

The notion of any presidential meeting with the Taliban, let alone one close to Sept. 11, stunned many of Mr. Trumpâ€™s top advisers. But Mr. Trump was eager to engage with the militant group, which the United States had been fighting for almost 20 years, as he pursued his goal of removing American troops from Afghanistan by the end of his term.

Months earlier, at Mr. Trumpâ€™s direction, the State Department had begun face-to-face talks with the Taliban in Qatar to negotiate an American exit. Mr. Trump called off the Taliban visit to Camp David after an American soldier was killed in a bombing in Kabul, the Afghan capital, but the peace talks continued.

They culminated in a February 2020 deal under which the United States agreed to withdraw in return for Taliban promises not to harbor terrorists and to engage in their first direct negotiations with the Afghan government. Mr. Trumpâ€™s secretary of state, Mike Pompeo, attended the signing ceremony in Doha and posed for a photo alongside the Taliban leader, Mullah Abdul Ghani Baradar, which resurfaced this week on social media. Mr. Baradar is widely expected to become the head of a new Taliban government based in Kabul.

Some former senior Trump officials now call that agreement fatally flawed, saying it did little more than provide cover for a pullout that Mr. Trump was impatient to begin before his re-election bid. They also say it laid the groundwork for the chaos unfolding now in Kabul.

â€œOur secretary of state signed a surrender agreement with the Taliban,â€ Mr. Trumpâ€™s second national security adviser, H.R. McMaster, said of Mr. Pompeo during a podcast interview with the journalist Bari Weiss on Wednesday. â€œThis collapse goes back to the capitulation agreement of 2020. The Taliban didnâ€™t defeat us. We defeated ourselves.â€

And in an interview with CNN on Wednesday, former Defense Secretary Mark T. Esper said that, while President Biden â€œownsâ€ the ultimate outcome in Afghanistan, Mr. Trump had earlier â€œunderminedâ€ the agreement through his barely disguised impatience to exit the country with little apparent regard for the consequences. That included an October 2020 declaration by Mr. Trump that he wanted the 5,000 American troops then in Afghanistan home by Christmas.

Neither Mr. Trump nor Mr. Pompeo has responded to such criticism with contrition. Instead, they have attacked Mr. Biden for what they call his disastrous execution of the pullout they set in motion.

After Mr. Trump moved thousands of troops out of Afghanistan during his last year in office, Mr. Biden inherited just 2,500 troops in the country. Mr. Biden has cited the U.S. commitment in Doha to remove all remaining forces by May of this year, a deadline he did not meet, as a key factor in his decision to continue the withdrawal.

Both Mr. Trump and Mr. Pompeo have emphasized that their deal with the Taliban was conditional, saying or at least strongly implying that they would have halted the U.S. withdrawal before a Taliban takeover forced the sort of chaotic evacuations of Americans and their Afghan allies that have unfolded over the past week.

But the Taliban have not violated any of the written conditions of the four-page agreement signed in Doha, which bore a title reflecting the awkwardness of the talks with an insurgent group: â€œAgreement for Bringing Peace to Afghanistan between the Islamic Emirate of Afghanistan which is not recognized by the United States as a state and is known as the Taliban and the United States of America.â€

Nor is there evidence that top Trump officials prioritized planning for the eventual evacuation of Americans, or of Afghans who might be subject to Taliban reprisals for working with the United States.

Mr. Trump has suggested broadly that he would have overseen â€œa much different and much more successful withdrawal,â€ even though in the closing months of his presidency, he repeatedly pressured his generals and national security aides to accelerate the process.

And he has claimed that he would have ensured mass evacuations from Afghanistan, even though aides say he never focused on the issue.

â€œCan anyone even imagine taking out our military before evacuating civilians and others who have been good to our country and who should be allowed to seek refuge?â€ Mr. Trump said in a statement on Monday.

For his part, Mr. Pompeo has repeatedly suggested that the Trump administration would have thrown the brakes on an American departure from the country as the Taliban pursued military conquest.

â€œWe made abundantly clear if they did not live up to that piece of paper, to the words that they had put on the ground, we werenâ€™t going to allow them to just walk away from any deal that they had struck, we were going to go crush them,â€ he said on â€œFox News Sundayâ€ over the weekend.

But Mr. Pompeo did not offer specifics about how the Taliban had violated the deal. The next day, he told the Fox Business Network that the Trump administration â€œwould have demanded that the Taliban actually deliver on the conditions that we laid out in the agreement,â€ saying the Taliban had agreed â€œto engage in a meaningful power-sharing agreement, something that we struggled to get them to do.â€

Who are the Taliban leaders? These areÂ the top leaders of the Taliban, men who have spent years on the run, in hiding, in jail and dodging American drones. Little is known about them or how they plan to govern, including whether they will be as tolerant as they claim to be.

What happens to the women of Afghanistan? The last time the Taliban were in power, they barred women and girls from taking most jobs or going to school. Afghan women have made many gainsÂ since the Taliban were toppled, but now they fear that ground may be lost. Taliban officials are trying to reassure women that things will be different, but there are signs that, at least in some areas, they have begun to reimpose the old order.

It is not clear what conditions he was referring to, however. That agreement included guarantees that American security would not be threatened from Afghan soil, and required that the Taliban enter into negotiations with the Afghan government.

Nothing in the document mandated the Taliban to stop its military campaign, refrain from capturing Kabul or agree to an actual power-sharing deal with the Afghan government.

Nor did Trump officials place any public emphasis on the need to evacuate Americans and Afghan allies.

Asked about Mr. Trumpâ€™s statements, and whether he was aware of discussions about such evacuations, Mr. Trumpâ€™s former national security adviser John R. Bolton suggested there had been none.

â€œItâ€™s striking how Bidenâ€™s decision-making here so closely follows the Trump pattern,â€ Mr. Bolton said. â€œBiden wanted out; he apparently didnâ€™t want to be bothered with details that might have thwarted or slowed down executing his decision. So he left. Very Trumpian.â€

The Trump administrationâ€™s processing of applications by Afghans eligible for a Special Immigrant Visa, under a program created by Congress to resettle Afghans who had assisted the U.S. military, moved at a pace that frustrated refugee rights activists. In 2018, the International Refugee Assistance Project filed a lawsuit against Mr. Pompeo and other U.S. officials, accusing them of â€œsystemic delaysâ€ in approving such visas.

Former Trump officials protest that they approved far more visas than the Obama administration did, although President Barack Obama never sought to remove all troops from Afghanistan.

Sunil Varghese, the groupâ€™s policy director, was skeptical of Mr. Trumpâ€™s claim that he would have ensured the rescue of Afghan allies like former interpreters for U.S. troops.

â€œIf he was serious about including evacuation or relocation as part of our military withdrawal, I think he would have set a longer timeline and we would have heard about itâ€ from federal officials, Mr. Varghese said.

On Wednesday, Mr. Trumpâ€™s former ambassador to the United Nations, Nikki Haley, took to Twitter to criticize the Biden administration for its improvised negotiations now underway with the Taliban, meant to ensure the safety of U.S. evacuation operations in Kabul.

Ms. Haley, who played no role in the Trump administrationâ€™s talks with the Taliban, took aim at Mr. Biden. But, wittingly or not, she also incriminated Mr. Trump and Mr. Pompeo â€” all potential rivals for the 2024 Republican presidential nomination.