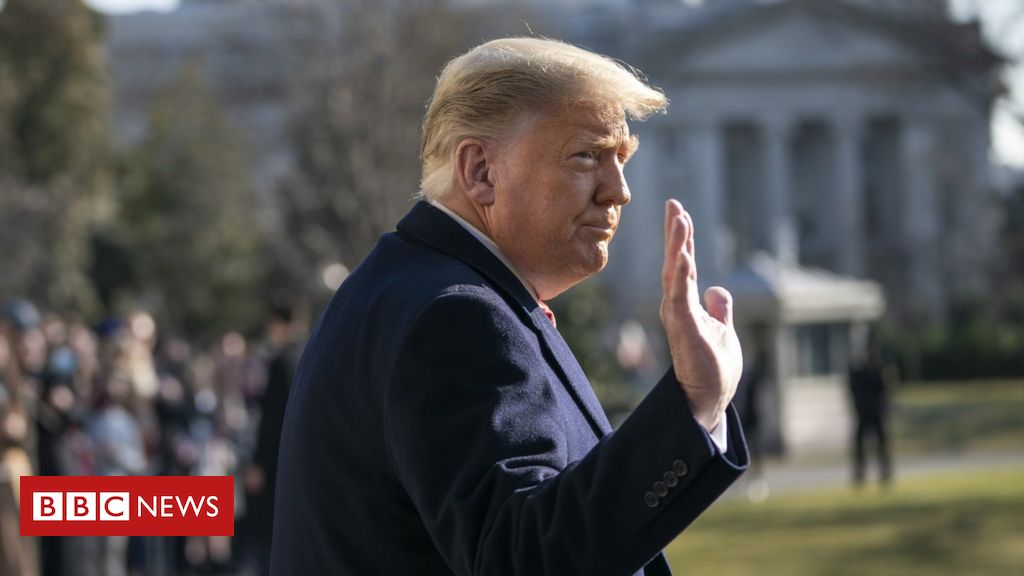 The US House of Representatives is expected to hold a vote to impeach President Donald Trump over his role in last week’s storming of Congress.

Democrats accuse the president of encouraging his supporters to attack the Capitol building. Five people died.

Members of Mr Trump’s Republican party say they will join Democrats to impeach him on Wednesday, formally charging the president with inciting insurrection.

President Trump has rejected any responsibility for the violence.

The riot last Wednesday happened after Mr Trump told supporters at a rally in Washington DC to “fight like hell” against the result of November’s election.

Will Trump be impeached?

As Democrats hold a majority in the House, the vote is likely to pass. The case will then head for the Senate, where a trial will be held to determine the president’s guilt.

A two-thirds majority would be needed there to convict Mr Trump, meaning at least 17 Republicans would have to vote for conviction. As many as 20 Senate Republicans are open to convicting the president, the New York Times reports.

The timeline of when a trial could be held is not known but it is unlikely it could be finished before Mr Trump leaves office on 20 January, when Joe Biden will be sworn in as president.

The Senate could also use an impeachment trial to block Mr Trump from ever running for office again. He has indicated he plans to campaign for president in 2024.

Wednesday’s vote means that Mr Trump is likely to become the first US president ever to be impeached twice.

In December 2019 he became the third president to be impeached over charges of breaking the law by asking Ukraine to investigate Mr Biden to boost his own chances of re-election. The Senate cleared him.

What have Republicans said?

The third most senior Republican in the House, Liz Cheney, vowed to back impeachment, saying Mr Trump had “summoned this mob, assembled the mob, and lit the flame of this attack”, referring to last week’s riot.

“There has never been a greater betrayal by a president of the United States of his office and his oath to the Constitution,” said the Wyoming representative, daughter of former Vice-President Dick Cheney.

At least four other Republican House members said they would also vote for impeachment.

House Republican leader Kevin McCarthy, a Trump ally who has said he opposes impeachment, decided not to ask rank-and-file members of the party to vote against the measure, US media reported.

According to the New York Times, Senate Republican leader Mitch McConnell told confidants he was pleased Democrats wanted to impeach the president because he believed it would help rid the Republican party of Mr Trump.

With just a week left in his term, it now appears all but certain that Donald Trump will become the first president to be impeached twice.

Unlike his first go through the process, this vote will have the support of at least a handful of Republicans – including Liz Cheney, a member of the party’s House leadership team. There is also, unlike January 2020, a chance the Senate has enough votes to successfully convict the president. Majority Leader Mitch McConnell’s recent signals of approval are evidence of that.

Of course, the primary consequence of Senate conviction – removal from office – seems of limited relevance with so little time left in the Trump presidency. Democrats, however, view impeachment as a formal way of marking their outrage at the president’s behaviour, not just last week, but during his months of challenging and undermining November’s election results.

A successful conviction could also result in Trump’s being banned from ever holding federal public office again and stripped of the privileges enjoyed by ex-presidents.

That prospect alone, in the minds of Democrats (and, perhaps, some Republicans ready to break with Trumpism), makes impeachment worth the effort.

What did Trump say?

Speaking on Tuesday, Mr Trump showed no contrition for remarks he made to supporters before the violence, when he also repeated unsubstantiated claims of voter fraud.

He also said: “This impeachment is causing tremendous anger… and it’s really a terrible thing that they’re doing,” adding that the “real problem” was rhetoric used by Democrats during Black Lives Matter protests and violence last year.

The measure accuses Mr Trump of “trying to unlawfully overturn” the results of the election and of having “imperilled a coequal branch of Government”.

Earlier, the House passed a resolution by 223-205 votes calling on Vice-President Mike Pence to help oust Mr Trump using the 25th Amendment, which would allow the cabinet to remove the president if he is deemed unable to discharge his duties.

But Mr Pence had already rejected the Democrats’ resolution, saying in a letter to House Speaker Nancy Pelosi: “Under our Constitution, the 25th Amendment is not a means of punishment or usurpation.”