Home Economy Trump could do to China what Reagan did to Soviet Union, if... 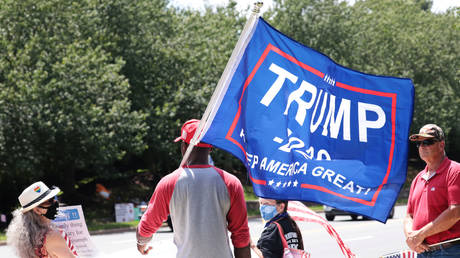 Beijing says it will not accept Washington’s “smash and grab” policy of trying to force the sale of Chinese social media app TikTok. It’s warned it will retaliate against what it calls “theft.”

RT’s Boom Bust talks to John Quelch, Dean of Miami Herbert Business School, about the two countries’ tussle over TikTok and the future of their relationship.

“The level of Chinese investment in the United States is only $5-$6 billion, but the level of US investment in China is about $120 billion. So, in terms of a potential retaliation by Beijing, there are a lot of US assets in China that could be potentially confiscated in a tit-for-tat escalation,” he says.

Quelch adds that current US-China relations look like “a multifaceted downward spiral,” which is certain to continue through to November.

“I think, were President Trump to secure a second term, there are some people who would say his major objective would be to do to China what Ronald Reagan did to the Soviet Union,” he said. However, the situation would then be “very much tougher… He’s nervous about what might happen as this perpetual sequence of upsets continues to deteriorate in what is the most important bilateral relationship in the world.”