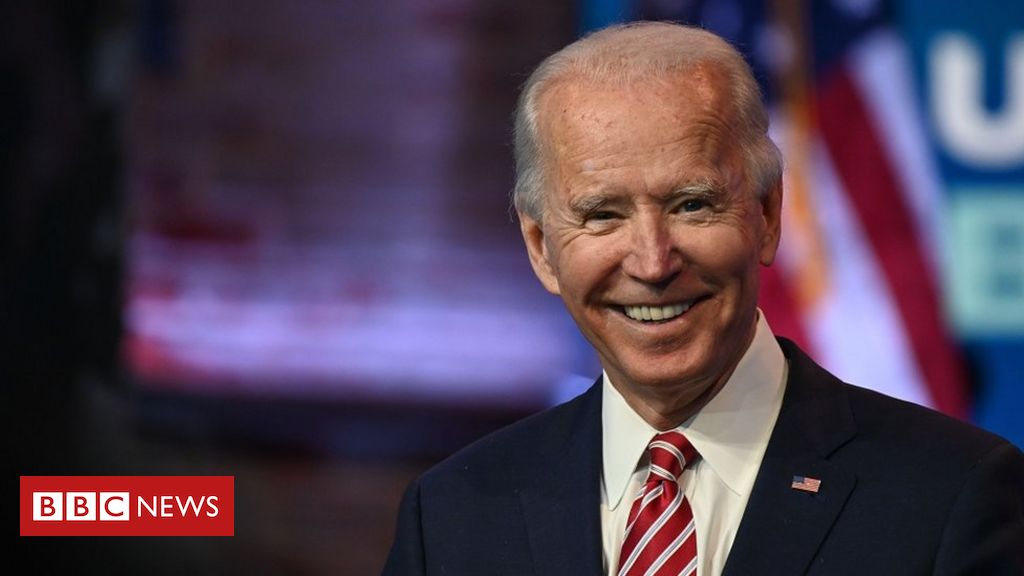 Donald Trump has accepted a formal US transition should begin for President-elect Joe Biden to take office.

The president said the federal agency overseeing the handover must “do what needs to be done”, even as he vowed to keep contesting his election defeat.

The General Services Administration (GSA) said it was acknowledging Mr Biden as the “apparent winner”.

It came as Mr Biden’s victory in the state of Michigan was officially certified, a major blow to Mr Trump.

The GSA announcement means the president-elect now has access to top security briefings, office space and government officials as he prepares to take office on 20 January.

His transition website has now changed to a US government domain. He will begin announcing the people he wants in the top jobs in his cabinet on Tuesday.

How did the Biden team respond?

It welcomed the start of the transition process as the Democratic president-elect gears up to be sworn in.

“Today’s decision is a needed step to begin tackling the challenges facing our nation, including getting the pandemic under control and our economy back on track,” a team statement said.

Earlier, Mr Biden unveiled his nominations for his foreign policy and national security team, consisting of old colleagues from his years in the Obama administration.

He is set to appoint Anthony Blinken as secretary of state and John Kerry as climate envoy, while Janet Yellen is tipped to be the first female US treasury secretary.

Mr Trump tweeted as the GSA, which is tasked with formally beginning presidential changeovers, informed the Biden camp that it would start the transition process.

GSA administrator Emily Murphy said she was making $6.3m (£4.7m) in funds available to the president-elect.

He did not concede, however, and went on to repeat unsubstantiated claims of corruption, pledging to keep up the “good fight”. It is worth noting that Mr Trump does not have to concede for Mr Biden to be sworn in as the 46th US president.

She said she had received no pressure from the White House over the timing of the move.

“I did, however, receive threats online, by phone, and by mail directed at my safety, my family, my staff, and even my pets in an effort to coerce me into making this determination prematurely,” Ms Murphy said in a letter to Mr Biden.

“Even in the face of thousands of threats I have remained committed to upholding the law.”

She had faced criticism from both political sides for failing to begin the transition process sooner, usually a routine step between the election and the inauguration.

What has the Republican Party been saying?

Although most of Mr Trump’s fellow Republicans have united behind his refusal to accept defeat until now, some have increasingly been breaking rank.

Tennessee Senator Lamar Alexander, who is retiring, said the president should “put the country first” and help Mr Biden succeed.

“When you are in public life, people remember the last thing you do.”

More than 160 business leaders had also urged Ms Murphy in an open letter to immediately recognise Mr Biden as president-elect.

“Withholding resources and vital information from an incoming administration puts the public and economic health and security of America at risk,″ they wrote.

What happened in Michigan?

Michigan is the latest hotly contested state to certify its election result, despite disputes from Mr Trump’s campaign.

The president’s Republican allies had called for the certification – which finalises the outcome of a state’s popular vote – to be delayed for two weeks to audit ballots in a heavily Democratic county.

However, the Michigan Board of State Canvassers voted to certify the result on Monday. One of two Republicans on the Michigan State Board of Canvassers joined the two Democrats to finalise the outcome.

The other Republican board member, Norman Shinkle, abstained, suggesting delaying the certification over irregularities affecting a few hundred votes in one county.

Mr Biden will now receive all 16 of the state’s votes in the US Electoral College, which is expected to approve Mr Biden’s victory on 14 December.

What about Trump’s other legal challenges?

Mr Trump and his allies have suffered a string of court defeats in key states as they race to challenge the results.

In Pennsylvania, a Republican judge on Saturday ruled that the Trump campaign had tried to “disenfranchise almost seven million voters” with no real evidence. The president’s lawyers have appealed now to the Circuit Court of Appeals in Philadelphia.

The president’s other legal efforts in the state have failed to change Mr Biden’s lead of some 80,000 votes.

The Trump campaign has also called for another recount in Georgia, after an earlier recount by hand confirmed Mr Biden’s win in the state.

In Wisconsin, a partial recount is under way by request of the Trump campaign. Election officials have accused Trump supporters of obstructing the state’s recount of votes.

They said observers for Mr Trump were in some cases challenging every single ballot to deliberately slow down proceedings.