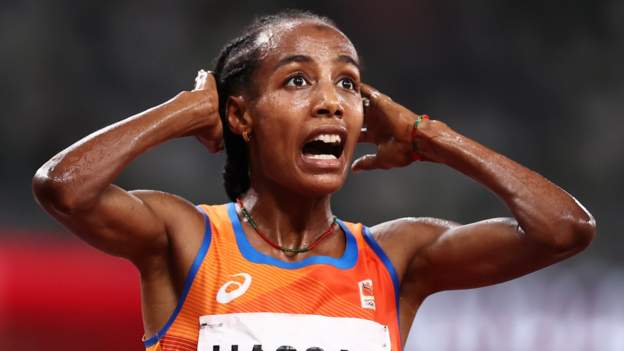 Sifan Hassan said she had caffeine to thank after winning her first Olympic gold medal in the 5,000m on Monday.

Ethiopia-born Hassan, 28, produced a devastating final-lap sprint to win in 14 minutes 36.79 seconds, but it seems she required a little assistance to carry her over the finish line.

“Without coffee I would never be Olympic champion,” she joked.

Hassan’s gruelling schedule means she will have run in six middle- or long-distance races in eight days.

In her 1500m heat earlier on Monday, she had to recover quickly from a fall just after the bell, swiftly picking herself up to qualify in first place.

“I can’t believe it. It was terrible when I tripped,” she said. “When I fell down and had to jump up I felt like I was using so much energy. I couldn’t believe the feelings in my legs. All the energy seemed to leave me.

“I was so tired. Without coffee I would never be Olympic champion. I needed all the caffeine!”

Hassan has a little longer to recover for her next race – the second semi-final of the 1500m, which takes place on Wednesday.