Home World USA To combat the virus, some schools have moved classes outside. 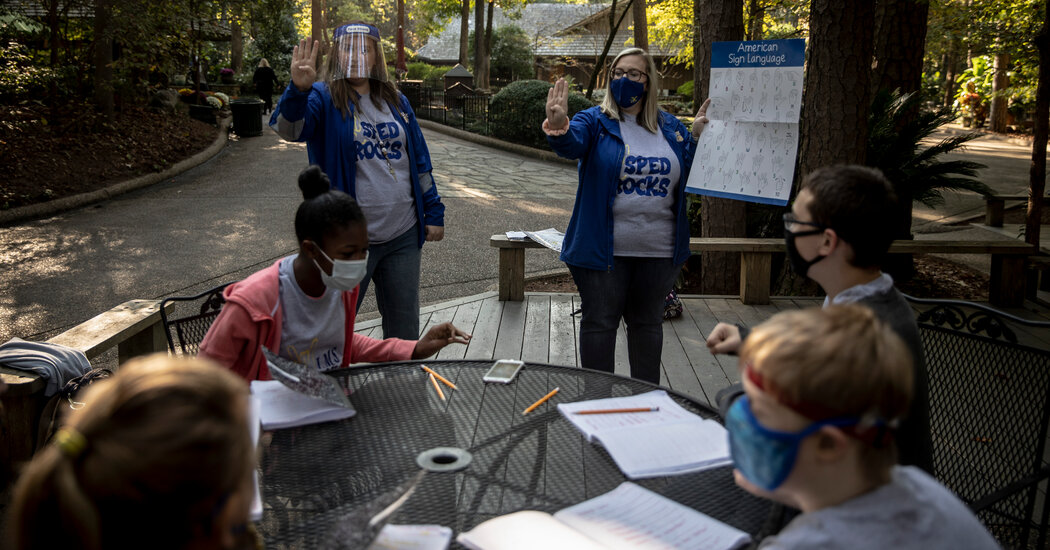 World|To combat the virus, some schools have moved classes outside.

First graders sit crisscross applesauce on tree stumps, hands sky-high to ask a question. Third graders peer closely at the plants growing in class gardens, or spread themselves out in a sunflower-filled space to read. When the sun beats down, students take shelter under shades made from boat sails.

That’s what a school day is like this year in one community on Cape Cod, where every student now spends at least part of the day learning outdoors — at least when the rain holds off.

Seeking ways to teach safely during the pandemic, schools across the United States have embraced the idea of classes in the open air, as Americans did during disease outbreaks a century ago.

The efforts to throw tents over playgrounds and arrange desks in parks and parking lots have brought new life to an outdoor education movement, inspired in part by Scandinavian “forest schools” where children bundle up against frigid temperatures for long romps in the snow.

“The outside provides much more flexibility,” said Sharon Danks, the chief executive of Green Schoolyards America and the coordinator of the National Covid-19 Outdoor Learning Initiative, which formed in May. “You can have a six-foot-apart seating chart, and have enough space to move around.”

While some educators balked at the costs and logistical hurdles, others embraced the idea, with teachers learning carpentry to build their own outdoor classrooms, and parents raising money and hitting up local businesses for lumber.

“Covid has hastened the pace of a shift toward trying to take better advantage of the outdoors,” said Maria Libby, the superintendent of the Five Town Community School District in Rockport, Maine, who bought tents and Adirondack chairs for outdoor classrooms.

A video in a hospital courtyard captures an 81-year-old Italian’s serenade to his dying wife.

Protests Over Security Bill in France Draw Tens of Thousands