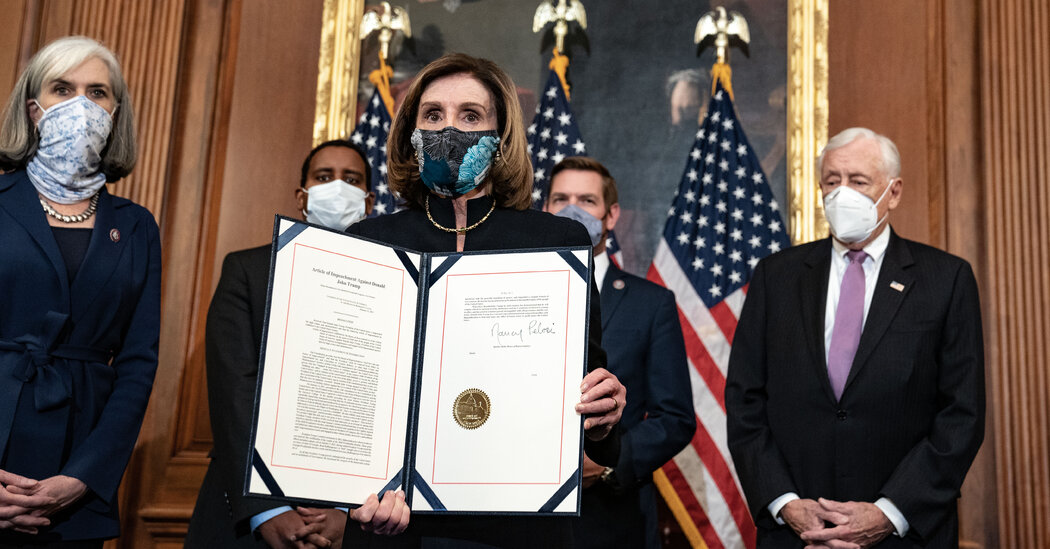 Want to get The Morning by email? Hereâ€™s the sign-up.

Even during a scandal, a presidentâ€™s own party members usually defend him. Decades later, people tend to forget how overwhelming the partisan support was and exaggerate the degree of conscience among politicians of the past.

All of which helps puts yesterdayâ€™s second impeachment of President Trump into perspective: It was both a strikingly partisan affair â€” and an unusually bipartisan one.

On the one hand, dozens of members of Congress refused to break with a president who tried to overturn an election result and incited a mob that attacked Congress, killing a police officer. Only 10 House Republicans voted for impeachment, and the final tally was 232 to 197.

On the other hand, Trump has suffered more defections from his party than any previous president besides Nixon, who ultimately lost Republican support and resigned before the House could impeach him. Yesterdayâ€™s vote, Daniel Nichanian of The Appeal wrote, was â€œthe most bipartisan impeachment of a president in U.S. history.â€

By comparison, only five House Democrats voted to impeach Clinton, The Timesâ€™s Carl Hulse noted â€” three of whom later became Republicans, while a fourth joined the George W. Bush administration. In 2019, not a single House Republican voted to impeach Trump. Only one Republican senator, Mitt Romney, voted to convict, and other Republicans disdained the process from the start.

This time, they are sending a more nuanced message. Mitch McConnell, the Republican Senate leader, has put out word that he is glad impeachment is happening, and he issued a statement yesterday saying he had â€œnot made a final decision on how I will voteâ€ in the Senate trial.

Of course, McConnell is a crafty politician who would like both to be rid of Trump and to prevent President-elect Joe Biden from passing much legislation. So McConnell also signaled yesterday that he would not start a Senate trial before Biden took office, effectively forcing Democrats to choose between trying Trump and focusing on Bidenâ€™s agenda.

The delay seems to make conviction less likely. â€œPeopleâ€™s outrage levels recede,â€ my colleague Maggie Haberman wrote yesterday. â€œMemories fade. And I do wonder if there will be as much Senate Republican anger next month as there is now.â€

Still, the existence of that anger underscores the historic nature of yesterday. Trump became the first president in U.S. history to be impeached twice â€” and only the second to have a meaningful number of his party members in Congress deem him unfit to be president.

The 10 Republicans who voted for impeachment included Liz Cheney of Wyoming, the No. 3 ranking Republican in the House; four others from safely Republican seats; and five from more competitive districts.

â€œIâ€™m not afraid of losing my job, but I am afraid that my country will fail,â€ Jaime Herrera Beutler of Washington, whoâ€™s in her sixth term, said. â€œMy vote to impeach our sitting president is not a fear-based decision. I am not choosing a side. Iâ€™m choosing truth.â€

The Scene in Congress

What the Members Said

THE DAYâ€™S OTHER NEWS

Letter of Recommendation: Eat chips, The Timesâ€™s Sam Anderson writes. â€œA bag of chips is a way to defeat time. It brings temporary infinity: a feeling that it will never end. A chip. A chip. A chip. Another chip.â€

From Opinion: Farhad Manjoo, Nicholas Kristof and Thomas B. Edsall have columns.

Lives Lived: Adolfo QuiÃ±ones, better known as Shabba-Doo, grew up in a public-housing project in Chicago and became a pioneer of street dance. He called it â€œa valid art form, on the same level as jazz or ballet.â€ He died at 65.

The future of gaming

The pandemic has been very good for the video-game business. Spending on games rose 22 percent last year, The Washington Post reports. The number of monthly users on Discord, a chat platform popular with gamers, doubled to 140 million.

But the boom isnâ€™t about only the pandemic. Itâ€™s bigger than that, Sean Monahan argues in The Guardian: Video games are replacing music as the dominant form of youth culture.

Alexandria Ocasio-Cortez and Joe Biden turned to Among Us and Animal Crossing: New Horizons to reach young voters. The rapper Travis Scott had more than 12 million viewers for a virtual concert on Fortnite last year â€” nearly double the audience of the 2020 MTV Video Music Awards. â€œWeâ€™re going to see more of these events, even after regular concerts are safe to attend again,â€ an analyst told The Hollywood Reporter.

The cultural sway of games stems largely from interaction. Games like Animal Crossing have become places to socialize, and even to host virtual graduations, parties or protests.