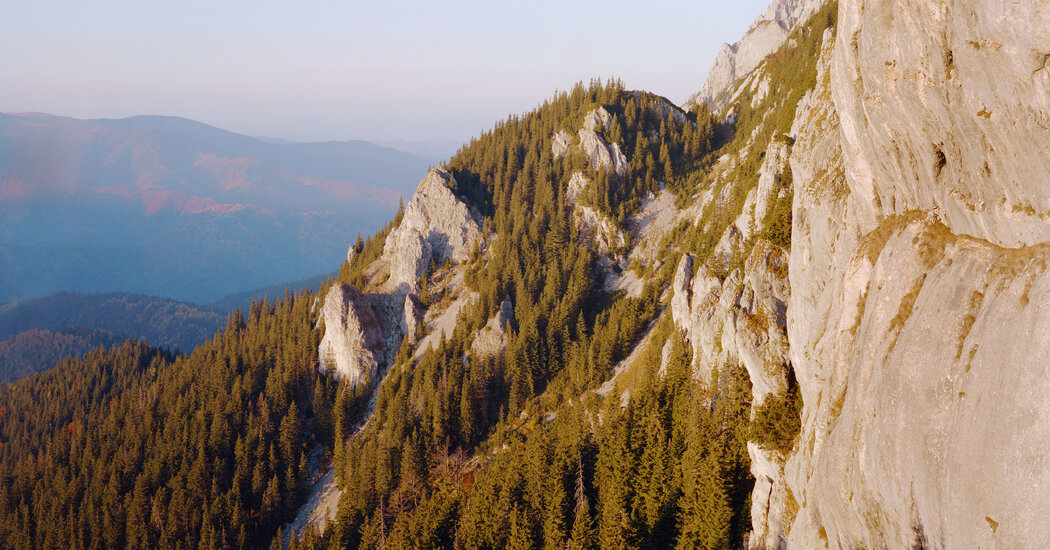 It was my first visit to Romaniaâ€™s Southern Carpathian Mountains in 2018, and I was standing beside a derelict sheepfold high above the Dambovita Valley. To the east, the imposing limestone cliffs of Piatra Craiului, or Kingsâ€™ Rock, towered overhead. All around me was a panorama of deep valleys, soaring mountains and the ever-present forest.

Here among the Fagaras Mountains, the highest reaches of the Southern Carpathians, and tucked away in an unlikely corner of the European Union, an immense conservation project was underway. The ultimate aim: the creation of a â€œEuropean Yellowstone.â€

Accompanying me on my first trip was Mihai Zotta, the technical director of Foundation Conservation Carpathia, or F.C.C. Founded in 2009, F.C.C. is working to protect a vast area of the Carpathian forests â€” by purchasing property, leasing hunting rights, rewilding the land and halting illegal logging.

Eventually the plan is to return their landholdings to the public in the form of a national park based around the Fagaras Mountains, which, sitting alongside the existing Piatra Craiului National Park, would create a chain of parks and a wide-reaching wildlife reserve.

Before my initial reporting trip, which was funded by The Royal Photographic Society and Photographic Angle Environmental Bursary, I hadnâ€™t entertained the idea of visiting Romania. But as rewilding initiatives began to gain global momentum, Romania stood out to me as a remarkable example.

While many countries were working to replace what they had once lost, Romania, in many ways, was battling to preserve what it still had.

Romania is home to extensive swaths of old-growth and primeval forests, many of which sit in the Southern Carpathians. These areas are particularly biodiverse â€” and increasingly threatened.

Instead of simply photographing the landscape and wildlife, I began to embed myself with F.C.C. rangers as they conducted their daily operations: wildlife monitoring, the replanting of forests, patrolling to deter logging.

Since 2018, Iâ€™ve conducted around 10 trips to the region. Iâ€™ve spent days bundled up in the back of a rangerâ€™s S.U.V., and clutching my large-format camera as we track wolf packs on snowmobiles.

Over time, I was able to establish a camaraderie with many of the rangers. Occasionally, on patrols with the wildlife monitoring teams, they would invite me to assist in their duties â€” including the collecting of fresh bear scat.

The chief wildlife ranger, Bogdan Sulica, once took me to the site of a bear attack on a small farm just outside the commune of Saticul de Sus. Despite my efforts to assist in ranger duties, he laughingly advised that I stand on a hill and stick to taking pictures.

After the fall of communism, the Romanian government began a restitution program for nationalized land, resulting in a new ownership structure for a significant portion of Romaniaâ€™s forests. In the years that followed, logging companies bought many of the privately owned forests, leading to large-scale deforestation.

To further complicate matters, wildlife populations in the Fagaras Mountains have been subjected to severe levels of poaching and overhunting. To combat this, F.C.C. has founded its own huntingâ€™s association and has purchased hunting rights for several large tracts, totaling around 160,000 acres. By purchasing the rights and foregoing hunting, they can effectively protect the animals within the tracts.

While thereâ€™s a broad consensus in Romania for preserving these areas, tensions have sometimes arisen among the surrounding communities. Some locals feel as though certain land was protected without their input, especially those with strong ties to hunting. Others have seen protected animals â€” bears, wolves, lynx â€” damage their property and prey on their livestock.

My documentation of F.C.C.â€™s work in Romania continues, having organized itself around the three primary facets of their initiative: wildlife monitoring, forest replanting and community outreach programs.

Creating a national park, Iâ€™ve learned, takes time. Progress is slow, and there will likely be many more unforeseen roadblocks standing between the foundation and the fully realized dream of a European Yellowstone. But, in time, through the combined efforts of F.C.C. and the people of Romania, a blueprint may emerge that others in the international community might follow.