Home World The Beast: How Biden's getting around on his first overseas trip 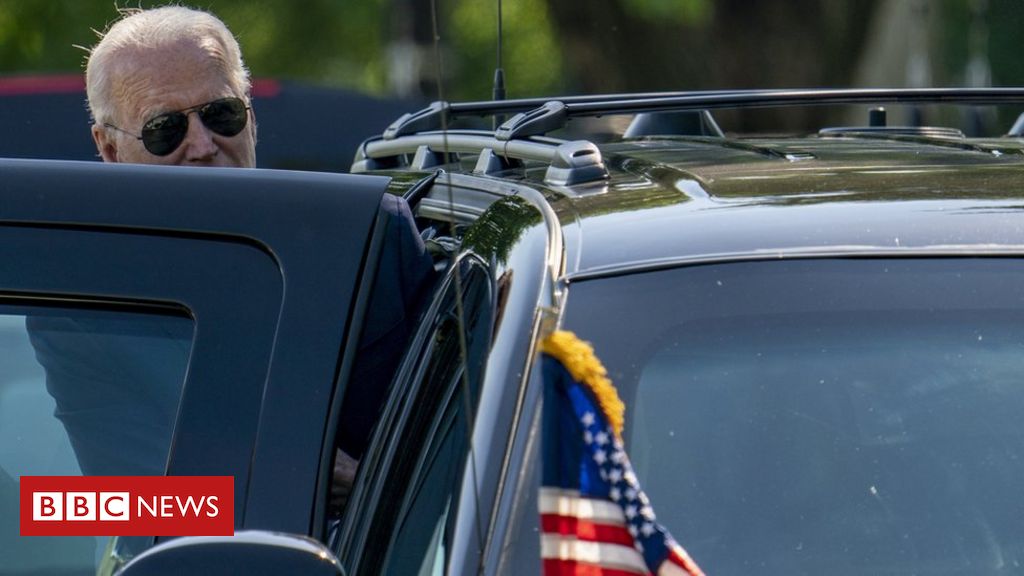 US President Joe Biden has arrived in the UK for his first official overseas trip.

It is his first stop on an eight-day visit to Europe. He will attend a G7 leaders’ meeting in Cornwall and see the Queen before crossing the Channel for more official events – including his first Nato summit as president, and concluding by meeting Russian President Vladimir Putin in Geneva.

Mr Biden does not travel lightly. The US president has an array of speciality vehicles to help him move around in safety and comfort, on land and in the air.

And none is more iconic than the presidential plane – Air Force One.

The aircraft landed at RAF Mildenhall in Suffolk on Wednesday, where Mr Biden met US personnel stationed there before flying to Cornwall.

As the White House website explains, Air Force One is actually the air traffic control sign for any Air Force aircraft with the US president on board.

But for the most part the term is used to refer to the two famous white and blue planes – specially adapted Boeing 747-200B series aircraft – which carry the tail codes 28000 and 29000.

The planes have advanced communications, avionics and defences – including protection against electromagnetic pulses and flares to throw off heat-seeking missiles – which mean they can function as an airborne, mobile command centre in case of an attack on the US.

They are also capable of refuelling in the air, meaning in theory the planes have unlimited range.

Inside, there is 4,000 sq feet (372 sq m) of floor space spread over three levels. Aside from a presidential suite, there are also medical facilities, food galleys, and space for advisers, Secret Service protection officers and journalists.

For short trips in the air, the president uses a helicopter – recognisable by its predominantly green body and white top.

Marine One – again, not just one helicopter, but the name for any Marine Corps aircraft carrying the US president – usually refers to a VH-3D Sea King or a VH-60N White Hawk.

Decoy versions of Marine One often fly alongside the president’s helicopter. It is also usually accompanied in the air by escort aircraft, including the Osprey MV-22 – known as a “Green Top”.

UK readers may remember the tilt-rotor aircraft flying over London during former President Donald Trump’s visit in 2018. They are capable of vertical take-off and landing, and are designed to combine the functions of a helicopter with the range of a turboprop aircraft.

Once on the ground, President Biden usually transfers from Air Force One or Marine One to Cadillac One – nicknamed The Beast.

However, for his trip to Cornwall the president is travelling in an SUV.

However the Beast has also travelled to the UK and may be used later in Mr Biden’s visit.

The latest generation of presidential limousine debuted in 2018.

Manufacturer General Motors and the Secret Service have not given much away about the car’s specific security features. But reports suggest it weighs about nine tonnes (20,000lb), and has an armour-plated body and bulletproof windows.

It reportedly has tear gas grenade launchers, night vision cameras and a built-in satellite phone. The passenger cabin is said to be sealed, and the tyres are reinforced so the car can still move even with flat tyres.

The Beast can hold at least seven people and has a wide range of medical supplies on board, including a fridge with blood matching the president’s blood type, in case of an emergency.

A large procession of vehicles – consisting of security, medics, aides and the press – is also part of the presidential motorcade.

But so far President Biden has ditched the 5.5-metre (18ft) car for his journeys around Cornwall – pictured instead travelling in a much smaller armoured SUV.

Secret Service agents had already travelled to Cornwall to scout out the location of the G7 summit – looking for the best route through the narrow country lanes.

Former President Barack Obama’s visit to Downing Street in 2009 became a viral hit after the car struggled to turn in the famous street. The driver on another trip in 2016 was more successful.

Access is strictly controlled to Carbis Bay on Cornwall’s north coast, where global leaders are gathering.

The world’s seven largest so-called advanced economies take part in G7 summits. Aside from the US, this includes the UK, France, Germany, Japan, Italy and Canada. The EU is also represented.