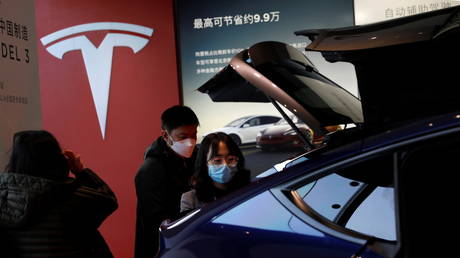 Tesla is shaking up the competition once again with the release of its new Model Y in China for a lower-than-expected price that’s reportedly causing a run of advance orders.

On the first day of 2021, the company announced the official launch of the Model Y SUV at its expanded Shanghai factory and began taking orders from customers with the deliveries to start in late February.

Prices start at $52,074, not counting a government subsidy for prospective buyers, representing a 30-percent discount to prices for the car listed six months earlier. According to local media, the start of production and lower-than-expected price have attracted a lot of customers already.

The planned production capacity is unknown, but it is expected to be over 200,000 units per year at its peak.

For the past nine months, Tesla has been expanding Gigafactory Shanghai to prepare for the production of the electric SUV. Since then, the plant has more than doubled in size.

With the new Model Y, Tesla is stepping into the center of the booming EV startup scene in China, and ready to take on its rivals, including Nio, Xpeng, and Li Auto, which all have small electric SUVs.

Further sweetening the deal for the Chinese consumer, Tesla is giving the Shanghai factory Model Y higher specifications than their California-made brethren.

The Chinese government offers attractive subsidies, and Tesla is using this to its clear advantage.

According to the Wedbush analyst Daniel Ives, due to demand from China, Tesla could deliver one million vehicles in 2022, which could account for 40 percent of its global sales, prompting Ives to opine that China is the “heart and lungs” of Tesla’s demand growth story”, Ives said last month.

As for 2020, Tesla delivered 499,550 vehicles, slightly missing its most recent guidance of 500,000 vehicles, but still beating Wall Street expectations.

For this year, analysts are predicting even better results.

Loup Ventures analyst Gene Munster expects the delivery growth rate for 2021 to be in the region of 40 percent on a year-on-year basis.

Also on rt.com
Elon Musk discloses his bitcoin kink and messes with crypto-enthusiasts via cheeky tweets

During 2020, Tesla saw an eightfold jump in share price which boosted it into the world’s eighth-biggest company by value, larger than the combined capitalization of Toyota Motor, Volkswagen, Ford, General Motors and Fiat-Chrysler.

Tesla’s stock has now soared over 95 percent over the past three months and well over 740 percent year to date, boosting the company’s market capitalisation–as of market Monday–to nearly $720 billion.

In late December, the company joined Wall Street’s S&P 500 share index, becoming its sixth-largest member accounting for 1.69 percent of the index. Despite successive positive results in quarterly earnings figures, the company is yet to make a profit for a single financial year.