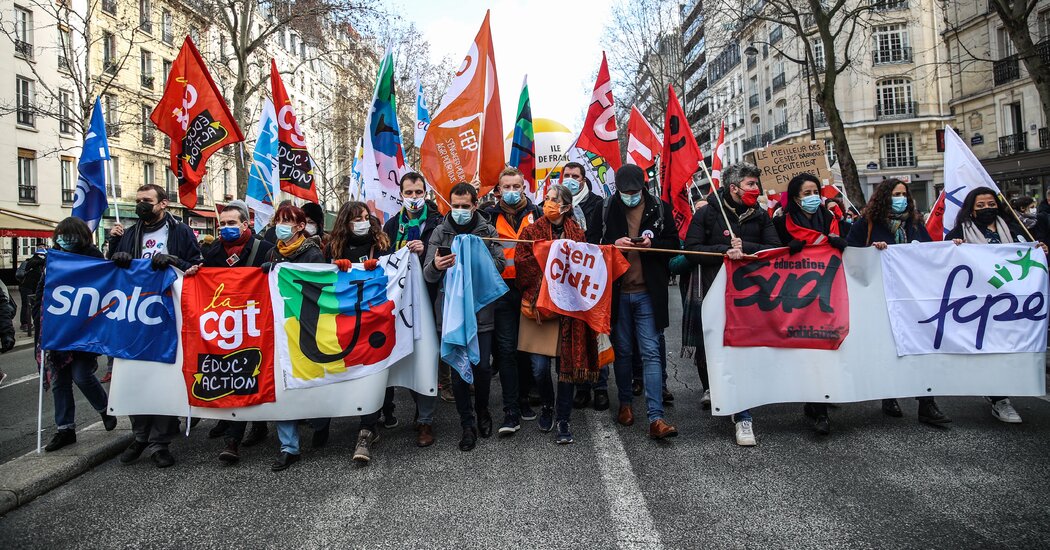 PARIS — Teachers across France staged a widespread one-day walkout on Thursday to protest changing Covid-19 rules that they say have disrupted schools and are now too lax to protect against the Omicron variant that is tearing across the nation.

Tens of thousands of teachers and school personnel, sometimes joined by students’ parents, participated in marches in cities across the country, in what appeared to be one of France’s biggest school protests in decades.

“It’s all this exasperation and anger that has built up to today,” said Sophie Vénétitay, a teacher and an official of the leading union in secondary schools.

The walkout, which most of the country’s teaching unions supported, posed a serious challenge for President Emmanuel Macron’s government, which has taken pride in keeping its schools open longer than many other European countries during the pandemic.

“I fundamentally believe the choice that we made to keep schools open is the right choice,” Mr. Macron said at a news conference on Tuesday.

The school policy is part of a social contract that Mr. Macron has bet will allow France to live with the virus, keeping pandemic restrictions limited in return for a high vaccination rate.

But the fast-spreading Omicron variant has partially disrupted that contract.

France is now averaging nearly 300,000 newly reported coronavirus cases a day, almost six times as many as a month ago and far more than at any earlier point in the pandemic. Olivier Véran, the country’s health minister, said on Twitter that he had tested positive on Thursday.

The surge in infections is partly driven by school-aged children, who are now more likely than French adults to be found to have the virus.

To spare whole classes from being sent home or entire schools from having to shut down, the government set up complex testing rules that confused millions of parents and teachers. It then changed the rules twice in a matter of days. The testing protocols led to snaking lines of exasperated parents and children standing in the cold outside pharmacies and medical laboratories.

Hoping to stave off a wave of growing anger, Prime Minister Jean Castex said Monday that the protocols would be relaxed. Parents will no longer have to pick up their children immediately after a classmate tests positive, and potentially exposed children no longer have to be tested at pharmacies and labs to return to class. Instead, the tests can be done at home.

But teachers said that the simplified rules increased risks of infections at school. They have also complained for weeks about a lack of equipment, like air-quality monitors, and shortages of highly protective masks.

The walkout “demonstrates the growing despair in schools,” the leading union of elementary school personnel said in a statement. “Not only does the current protocol fail to protect students, staff and their families, but it also completely disorganizes schools.”

The union has long requested a return to a rule enforced earlier this year that stipulated that classrooms must close at the first detected case of coronavirus.

Participants in Thursday’s march in Paris also expressed anger and exasperation at what they described as the government’s lack of preparation and anticipation, two years into the Covid-19 pandemic.

Around the world. The future of British Prime Minister Boris Johnson is in doubt after he admitted attending a party that violated lockdown rules. In France, teachers staged a one-day walkout against relaxed Covid testing rules that they fear will lead to more infections.

“The epidemic must be curbed, but the policy that has been chosen is not consistent,” said Louise Diego Taboada, a high school English teacher in a town southeast of Paris.

“We find ourselves enforcing a protocol, two days later it has changed, a new protocol, yet another,” she said, as she marched near the Luxembourg Gardens, in central Paris. “We have no support, we have no means.”

Ms. Vénétitay, the representative for the secondary schools union, complained about the government’s handling of the pandemic, which she said was erratic. “We learn things at the last minute, without being really consulted, while on the ground we do everything to keep the school going.”

Mr. Macron on Tuesday acknowledged that there was “obviously a fatigue, a weariness, many constraints” in schools and called on people for “patience” and “kindness” in this crisis. He was much less conciliatory last week, when he used his harshest language yet to urge recalcitrant, unvaccinated French people to get their shots.

The unusually broad response to calls for the walkout on Thursday reflected the level of anger of school personnel. Almost all of the country’s school unions joined the protest, as well as a major parents’ federation, which called on parents to march side by side with teachers.

Hervé Dardillat, the father of a 5-year-old boy, said he attended the march to support teachers whose work nowadays “must be difficult.” He added that the coronavirus had caused an unprecedented level of anxiety at school.

“That’s all the kids talk about now,” he said, referring to the virus. “I want them to dream and learn, just like before.”

Drake Put Toronto on the Map. A University Put Him in the Syllabus