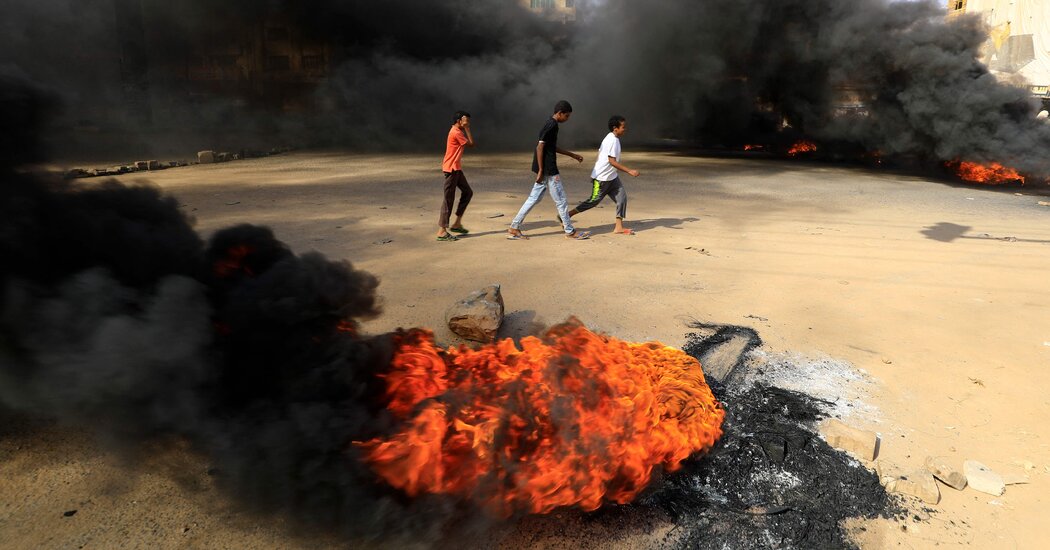 Sudanâ€™s top generals seized power on Monday, arresting the prime minister, imposing a state of emergency and opening fire on protesters, in tumultuous scenes that threatened to derail the transition to democracy in an African nation just as it emerged from decades of harsh autocratic rule and international isolation.

Sudanâ€™s military and civilian leaders have been sharing power for over two years in a tense, uneasy arrangement negotiated after a popular uprising ousted Sudanâ€™s longtime dictator, Omar Hassan al-Bashir, in 2019. It was supposed to lead to the countryâ€™s first free vote in decades.

But on Monday, the military shredded that deal, turned on the civilian leadership and declared that it alone would rule.

â€œThis is a new Sudan,â€ Lt. Gen. Abdel Fattah al-Burhan, the military chief, said in a news conference. â€œWe call on everybody to come together to develop and build the country.â€

As news of the putsch spread, young protesters flooded onto the streets of the capital, Khartoum, and soldiers opened fire, killing seven people and wounding at least 140 others, a Sudanese health ministry official told Reuters.

The protesters were hoping to protect the fruits of the revolution that had toppled Mr. al-Bashir and inspired heady hopes for a different future. But by evening they had retreated to neighborhoods where they burned tires and mounted barricades.

The internet was down in most of the country, much as it had been in the worst days of Mr. al-Bashirâ€™s rule, reinforcing fears the country was reverting to the old Sudan, and not the promised newer version.

The coup is also a stinging rebuke to the Western countries that pinned huge hopes on Sudanâ€™s transition to democracy and, in recent weeks, have scrambled to stave off a possible military takeover.

The United States removed Sudan from a list of state sponsors of terrorism last year, and backed a $50 billion debt relief program announced in June. In recent weeks, the Biden administration loudly voiced its support for civilian rule in Sudan and, over the weekend, sent its top regional envoy, Jeffrey Feltman, to Khartoum to dissuade the military leadership from seizing power.

Three hours after Mr. Feltman had left, Sudanâ€™s generals made their move.

The White House condemned Tuesdayâ€™s coup and suspended $700 million in emergency economic aid to Sudan, intended to support the democratic transition â€” a vital lifeline in a country laboring under a grinding economic crisis.

â€œWe reject the actions by the military and call for the immediate release of the prime minister and others who have been placed under house arrest,â€ Karine Jean-Pierre, a spokeswoman for President Biden, told reporters aboard Air Force One.

Still, there was little sign that Sudanâ€™s generals would relent.

Before dawn, they arrested Abdalla Hamdok, 65, a technocrat turned prime minister, along with his wife, then held him at an undisclosed location after he refused to endorse the coup. Others civilian leaders were also imprisoned.

Before becoming prime minister, Mr. Hamdok had worked for many years for the United Nations, most recently as deputy executive secretary of its Economic Commission for Africa from 2011 to 2018.

The arrests happened weeks before General al-Burhan, who leads the Sovereignty Council overseeing the democratic transition, was scheduled to surrender that position to a civilian â€” which would have put Sudan under full civilian control for the first time since 1989.

Instead, he dissolved the Sovereignty Council and effectively declared himself the countryâ€™s leader. He did, however, vow to press ahead with elections that he promised to hold in July 2023.

Few of Sudanâ€™s civilian leaders, many of them in detention or in hiding, believed that promise.

â€œThe presence of weapons in politics corrupts the military institutions and corrupts the political system,â€ Amjad Farid, a former adviser to Mr. Hamdok, said over the weekend as speculation of a coup mounted.

The militaryâ€™s move was a crushing counterpoint to the euphoria that gripped Sudan in 2019, when months of street protests, triggered by high bread prices, ended in the dramatic ouster of Mr. al-Bashir. He was infamous in the West for harboring Osama bin Laden in the 1990s, and for a campaign of genocidal violence in the western Darfur region a decade later.

The military leadership agreed that Mr. al-Bashir needed to go, and consented to share power with civilian leaders for a transitional period of about four years â€” an interval that was supposed to end with an election.

The military was also struggling with its own internal divisions, including rivalry between General al-Burhan and Lt. Gen. Mohamed Hamdan, commander of the Rapid Support Forces, a powerful paramilitary group accused of slaughtering many civilians in Darfur.

In recent weeks the military has presented a united face, and on Monday General al-Burhan blamed the coup on Sudanâ€™s squabbling civilian political factions.

There had been signs for many weeks that the military was plotting a takeover.

Last month, the authorities thwarted an attempted coup by loyalists of Mr. Bashir. Then, starting on Oct. 16, a crowd of pro-military protesters camped out on the steps of the presidential palace in Khartoum demanding the removal of the government, Western officials and analysts said.

The military also backed a disaffected tribal group that had blocked Sudanâ€™s biggest port, Port Sudan on the Red Sea, deepening the misery of long-suffering civilians already grappling with soaring inflation and chronic shortages of currency, food and fuel.

As the coup unfolded on Monday, the tribal leader behind the blockade announced he was calling it off, local media reported.

The threat of a military coup has dogged the transition for at least 18 months, driven by smoldering distrust between civilian and military leaders. One of the most contentious issues was the fate of Mr. al-Bashir.

The deposed autocrat has been languishing in a Khartoum prison since his ouster in April 2019, convicted of corruption in one trial as he awaits further charges. But Sudanâ€™s civilian leaders wanted to go further, saying they would send Mr. al-Bashir to stand trial at the International Criminal Court in The Hague, where he is wanted on decade-old charges of war crimes, crimes against humanity and genocide related to his role in the Darfur conflict.

But the prospect of bringing Mr. al-Bashir to justice appeared to discomfit senior generals, including Mr. al-Burhan, who faced the possibility that any trial might also expose them to criminal charges for their own misdeeds during the Darfur conflict.

The transition to democracy has also threatened the militaryâ€™s vast economic interests, including control of Sudanâ€™s gold trade. In recent months civilian leaders, among them Mr. Hamdok, have openly called for investigations into corruption and Bashir-era human rights abuses.

Civilian leaders said the military worried where those investigations might lead.

â€œThey have fears, they have interests and they have ambitions,â€ Yasser Arman, a political adviser to Mr. Hamdok, told The New York Times in an interview in Khartoum last week.

Whether the protests that erupted across Khartoum on Monday could prevent the military from seizing power is unclear. They started at dawn, with people barricading roads, waving flags and banners, and burning tires that sent plumes of smoke curling into the sky.

â€œThe people are stronger,â€ demonstrators chanted in videos circulating on social media. â€œRetreat is impossible,â€ they insisted, a reference to the possibility of returning to autocratic, Bashir-style rule.

Schools, banks and business establishments were mostly closed, witnesses said, as the Sudanese Professionals Association, a pro-democracy coalition of trade unions and other groups, called for civil disobedience.

â€œThis coup has no support at all,â€ said Ahmed Abusin, a 27-year-old businessman, speaking by phone.

Protesters, some whistling and shouting, urged a return to the civilian transition. â€œWe are revolutionaries. We are free,â€ they chorused. â€œWe will complete the journey.â€

By nightfall, the military had cleared the area outside the military headquarters of protesters, residents said. But many people remained on the streets, returning to their neighborhoods where they mounted barricades, singing and chanting defiant songs about Sudanâ€™s revolution.