Home Economy Fed creating money out of thin air will lead to collapse of... 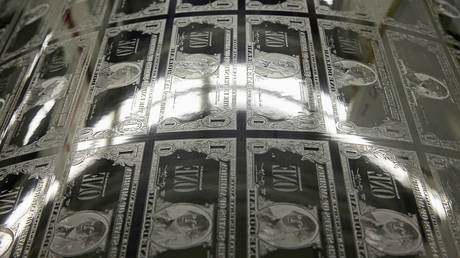 A selloff and political dynamics are driving the stock markets right now, according to veteran stockbroker Peter Schiff. He explores why the markets and the economy are so dependent on, and desperate for, stimulus.

Two factors have driven stocks lower, Schiff said â€“ the lack of progress on a stimulus deal and a surge in Covid-19 cases. The selloff could have been worse if it wasnâ€™t for a big move out of recovery stocks into the â€˜stay-at-homeâ€™ stocks benefiting from the pandemic. However, Schiff wonders how long these stay-at-home stocks can continue to buoy the market given that they are already significantly overvalued.

â€œOf course, if all of the people who are staying at home and shopping never go back to work and never actually have a job, and the only money they have to spend is the money the Fed creates out of thin air, eventually the dollar is going to collapse and their real purchasing power is going to go down along with it,â€ he said.

While most Americans point to the pandemic as a major reason for their dire straits, Schiff says theyâ€™ve dealt with other big shocks to the economy, like World War II, without a bunch of government stimulus. Thatâ€™s just because people were prepared, they had savings, he says.

â€œThe fact that we werenâ€™t prepared at all, thatâ€™s the problem no one wants to talk about. Why is it that Americans are loaded up with debt and living paycheck to paycheck? Why is the same thing true for so many businesses? Why are the credit losses now going to be horrific?â€

Also on rt.com
US economy looks to be on indefinite life support from government, Professor Wolff tells Boom Bust

Schiff explains that itâ€™s because the Federal Reserve kept interest rates so low for so long that people and companies were able to borrow far more money than they ever would have been able to borrow during a normal lending environment. â€œSo, itâ€™s because of the Federal Reserve that the society, the country, is so levered up. Thatâ€™s why weâ€™re so vulnerable. Thatâ€™s why everybody needs so much help.â€

Schiff says: â€œThe reason everybody needs the money is because we played politics in the past by making them so dependent on that money, by trying to delay and mitigate every single recession â€“ now weâ€™re in a depression. Had we allowed market forces to operate, we would have had a much healthier economy going into Covid-19 instead of a bubble. And the problem with bubbles is sooner or later, they always find a pin.â€