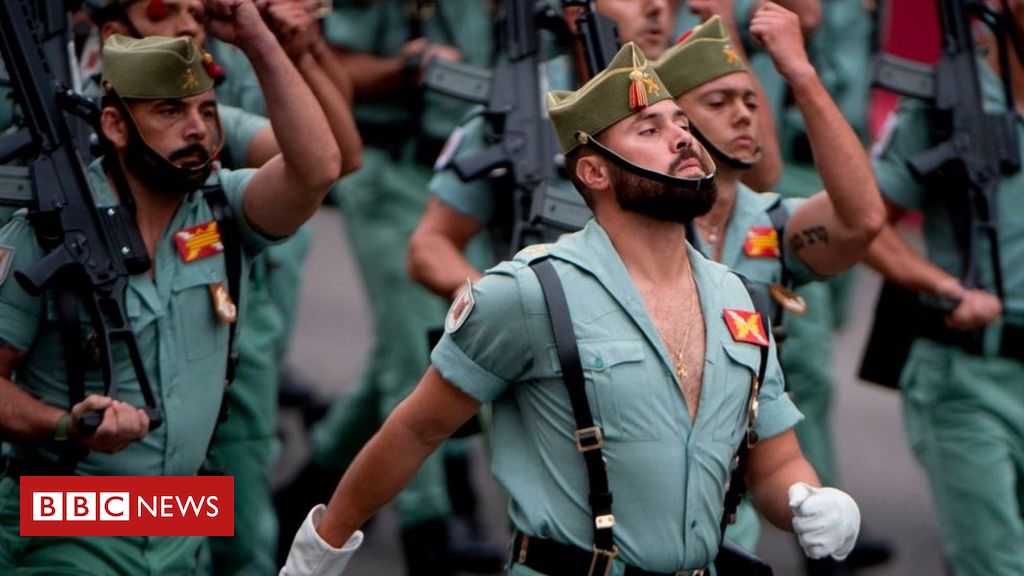 There is unease in Spain over plans for a Madrid statue honouring soldiers who spearheaded Franco’s fascist movement.

This week marks the centenary of what is often described as the most shocking defeat in the history of the Spanish military – the annihilation of a colonial force at the Battle of Annual, in what is now northern Morocco.

The rise of the Legión (Spanish Legion), an elite regiment, was a response to that. It is no ordinary force, but was born of the anger over Spanish defeats – seen as humiliations – at the hands of anti-colonial rebels.

The Legión became almost a symbol of Spanish virility – shirt necks open to the midriff, short sleeves showing off bulging biceps. It was the idea of Gen José Millán Astray, who would later be a leading element of the fascist cause in civil war Spain, with his war cry Viva la Muerte! (Long live death!)

Formed in 1920, it was modelled on the French Foreign Legion, designed to attract volunteers and so reduce the need for conscripts, who were struggling in the harsh conditions.

For some, it is a colourful element of the Spanish military, marching at parades with a goat for a mascot.

But for others it is shocking that Spain continues to have a force linked to Francisco Franco – apparently at odds with Spain’s historical memory law, which bans tributes to the late dictator.

The statue initiative has divided opinion, echoing the disputes over colonial-era statues in other countries, such as the attacks on symbols of slavery.

But while Black Lives Matter and other movements have focused on which old statues to pull down, Spain is immersed in a battle over which figures to erect and what parts of its past to commemorate – or to consign to history’s dustbin.

“This work is for those who love Spain, beyond ideologies,” sculptor Salvador Amaya told the newspaper La Razón, as he put finishing touches to his 6m (20ft) bronze figure of a legionnaire with fixed bayonet.

But military historian Luis Gonzalo Segura said: “The Legión does not deserve any kind of homage, not in Madrid or anywhere else. Its acts should be scrutinised and then it should disappear.” He was at a protest on 2 July against the plan to erect the statue in Madrid’s Plaza Oriente, in front of the royal palace.

A Berber army killed as many as 20,000 Spanish soldiers at the Battle of Annual on 22 July, 1921. The Legión led the response. Military historians say it used extreme violence – torturing, mutilating and raping Berber villagers – and soldiers revelled in their own barbarism by keeping trophies from victims’ bodies.

Before becoming Spain’s military dictator, Francisco Franco headed the Legión in North Africa. Under him it brutally put down a revolutionary uprising led by miners in the northern Spanish region of Asturias in 1934.

In the 1936-39 civil war, the Legión was involved in atrocities such as the massacre of Badajoz, when thousands were killed after the city fell to Franco’s fascists. There was much brutality by both the warring sides.

Unsurprisingly, attitudes toward the Legión mirror those people hold towards Spain’s Franco era. For leftists, the unit is a symbol of fascist barbarism. Meanwhile the legionnaires’ anthem The Bridegroom of Death remains popular today at rallies held by Spain’s far-right Vox party.

Spain’s current left-wing government has launched moves to address the Franco era, in an approach it calls “democratic memory”. It has included the exhumation of the dictator from the Valley of the Fallen mausoleum, where he was buried in 1975, and funding the opening of mass graves to identify victims of the dictatorship.

“In no other European country could there be a tribute paid to a military unit whose history is made up of massacres, murders, rapes, torture and mutilations,” said Mr Gonzalo Segura.

For Mr Amaya, however, such views show the intolerance of those who claim “moral ownership” over Spain’s history.

“Groups from the left will always protest about anything they don’t identify with,” the sculptor told La Razón. He declined to be interviewed by the BBC.

But the future of Mr Amaya’s controversial statue remains in doubt.

Madrid city council told the BBC that no decision had yet been made on whether to erect it, saying that it had merely received an offer to create the monument in Plaza Oriente from Spain’s Army Museum Foundation, which got 650 donations through crowdfunding.

So this part of Spain’s turbulent history has not yet been written.