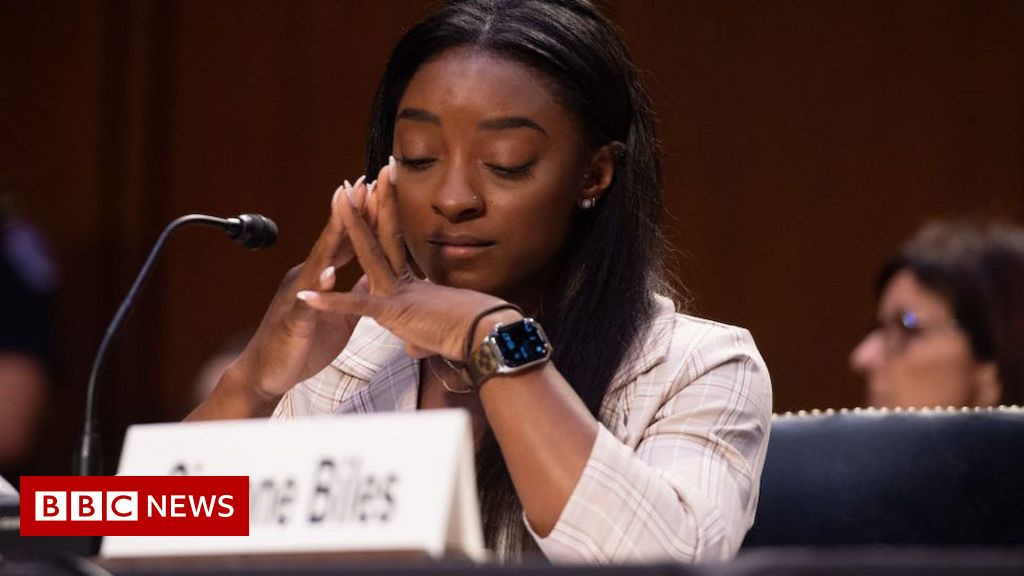 Elite US gymnast Simone Biles has testified before the Senate about abuse she suffered at the hands of disgraced former team doctor, Larry Nassar.

The committee is examining shortcomings in the FBI’s investigation into Nassar, later convicted of sexually abusing girls.

He is serving a life sentence in jail.

“I blame Larry Nasser, and I also blame an entire system that enabled and perpetrated his abuse,” said Ms Biles, the most decorated Olympic gymnast of all-time.

“If you allow a predator to harm children, the consequences will be swift and severe,” she added.

They were some of the more than 200 women who gave powerful impact statements to a court in 2018, detailing Nassar’s abuse when he was the sports doctor of the United States women’s national gymnastics team.

A long-awaited report into the FBI’s investigation, which was published in July, found numerous missteps and cover-ups by FBI agents, which allowed Nassar’s abuse to continue for months after the case was first opened.

The 119-page report by the Department of Justice Inspector General found that despite the seriousness of the allegations against Nassar, the FBI field office in Indianapolis had been slow to respond.

Confronted by their mistakes, two FBI officials lied during interviews to cover up their errors, the report said. Last week, one of those officials was fired by the FBI, US media reported.

On Wednesday, Ms Raisman criticised the FBI’s investigation as being “like guesswork”, while Ms Maroney – who was the only victim initially interviewed by the agency – called her experience deeply disappointing.

“They chose to fabricate, to lie about what I said and protect a serial child molester,” Ms Maroney told the committee. “What is the point of reporting abuse if our own FBI agents are going to take it upon themselves to bury that report in a drawer?”

Chair Dick Durbin said Wednesday’s Senate Judiciary Committee hearing would examine what had led to the failure of the FBI’s investigation to “prevent future, similar tragedies”.

Mr Wray is expected to face sharp questioning on the failings, and why agents found to have violated FBI policy were never prosecuted for their misconduct.

In total, Nassar was accused of sexual abuse by more than 330 women and girls at USA Gymnastics and Michigan State University.

Olympic gold medal winner Simone Biles is the most high profile victim to have spoken out about his abuse. After breaking her silence, Ms Biles said she was “relieved” after speaking out, after feeling “a lot of pressure” to keep the truth to herself for so long.

McKayla Maroney, who won gold at the London 2012 Olympic Games, has said she was sexually abused by Nassar over a seven-year period, starting when she was 13 years old.

“It seemed whenever and wherever this man could find the chance, I was ‘treated’,” she wrote on Twitter in 2017.