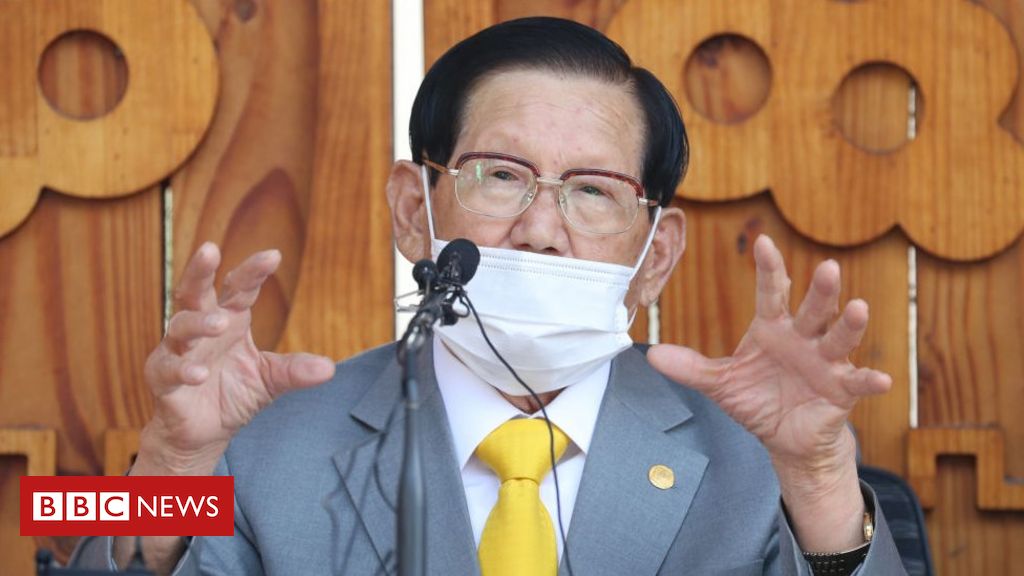 The leader of a South Korean religious sect has been found not guilty of breaking virus control laws.

Lee Man-hee, who heads the Shincheonji Church of Jesus, was however found guilty of embezzlement and given a suspended sentence.

The church was at the centre of South Korea’s first major Covid-19 outbreak last February, and was the target of public anger.

At one point it was linked to 36% of cases in the country.

In March last year, the Seoul city government filed a legal complaint to prosecutors against Mr Lee and 11 other leaders of the sect. They were accused of homicide, causing harm and violating the Infectious Disease and Control Act.

Mr Lee was arrested in August, following an investigation. Authorities accused the 89-year-old of hiding information about the group’s members and gatherings from contact tracers. He was also accused of embezzlement and holding unapproved religious events.

The church said Mr Lee was concerned for his members’ privacy, but never hid information from the authorities.

At a court session on Wednesday, Mr Lee was found not guilty of violating the country’s infectious disease act.

“We cannot punish someone on charges of obstructing antivirus efforts for leaving out certain data, when (the request) had more to do with data collection than an actual epidemiological survey,” said Judge Kim Mi-kyung said at the Suwon District Court, according to Yonhap News.

Mr Lee was instead found guilty of embezzling 5.6bn won and obstruction of public affairs, and was sentenced to three years in prison.

But he was given a four year probation period – meaning he will stay out of jail as long as he does not re-offend during this time.

A Shincheonji church representative told BBC Korean that the church welcomed the verdict, but added that it would appeal against the guilty charges.

According to Hankuk University of Foreign Studies professor Lee Chang-hyn, the question of whether or not Mr Lee had violated the virus law was a controversial one.

Prof Lee said that there was no evidence to prove that the list of members – which the sect leader was accusing of hiding from authorities – was essential in preventing the spread of the virus.

He added that today’s sentencing would serve as a precedent for future cases where Covid-19 prevention efforts might conflict with privacy protection efforts.

The group, which has 230,000 members, is considered a cult by many. Mr Lee identifies as “the promised pastor” mentioned in the Bible, and his followers believe he will take 144,000 people to heaven with him after Christ’s Second Coming.

The church says it has more than 20,000 followers outside of South Korea including in China, Japan and areas of Southeast Asia.

The group is known for packing its followers tightly together during services. Glasses, necklaces and earrings are reportedly banned from services.

Members of the fringe Christian group are believed to have infected one another and then travelled around the country, contributing to South Korea’s first outbreak last February. Mr Lee later publicly apologised for the virus’s spread following public anger.

“Although it was not intentional, many people have been infected,” he said at the time. “We put our utmost efforts, but were unable to prevent it all.”

Following that outbreak, South Korea then appeared to have successfully kept the virus at bay, but was late last year hit by another wave of infections.