Home Economy Shell must pay nearly half a billion for oil spill in Nigeria,... 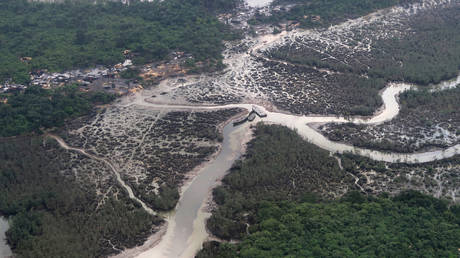 Nigeria’s Supreme Court has declined an application from Royal Dutch Shell which aimed to set aside a previous ruling that ordered the company to pay $467 million for damages caused by an oil spill almost five decades ago.

The judges upheld the previous decision, which ruled that the oil conglomerate must pay damages for an oil spillage in Ejama-Ebubu in Rivers State. According to Bloomberg and local media reports, the five-member panel said that Shell’s request to review the case lacked merit.

Also on rt.com
Six US oil executives convicted in Venezuela on corruption charges

The case centers around an oil spill that occurred in 1970 from Shell’s oil production activities in the Niger delta. The case was brought to court in 2001 by the Ejama-Ebubu community, which has accused the company of making their water sources unfit for human consumption. In 2010, a Nigerian court ruled that the company was liable for an oil spill in the community, but Shell still disputes its responsibility and says that it has cleaned the area.

“It is regrettable that the legal process in this case has been focused for so long on procedural issues and not the merits of the case,” Shell said in a statement responding to the latest ruling on Friday. Still disputing the Ejama-Ebubu claim, the company insists that “any attempt to enforce payment should not be permitted” due to other ongoing court proceedings.

“We have always maintained that we are ready to defend this case based on the available facts,” Shell said, as cited by Bloomberg.

Shell and its subsidiaries have also fought several lawsuits over oil spills in the Niger Delta, with legal tussles ongoing in the Hague and in the British courts, which previously sided with the oil giant. Last year, a UK court blocked the enforcement of damages against the major.

Shell was previously forced to pay for massive oil spills in Nigeria that occurred in 2008 and 2009, considered to be the biggest in decades of oil exploration the country. The Bodo fishing community, whose territory was polluted as the result of the incident, sued the company, which agreed to pay $83 million in compensation in 2015.