Home World Serbia coronavirus: The Church losing its leaders to the pandemic 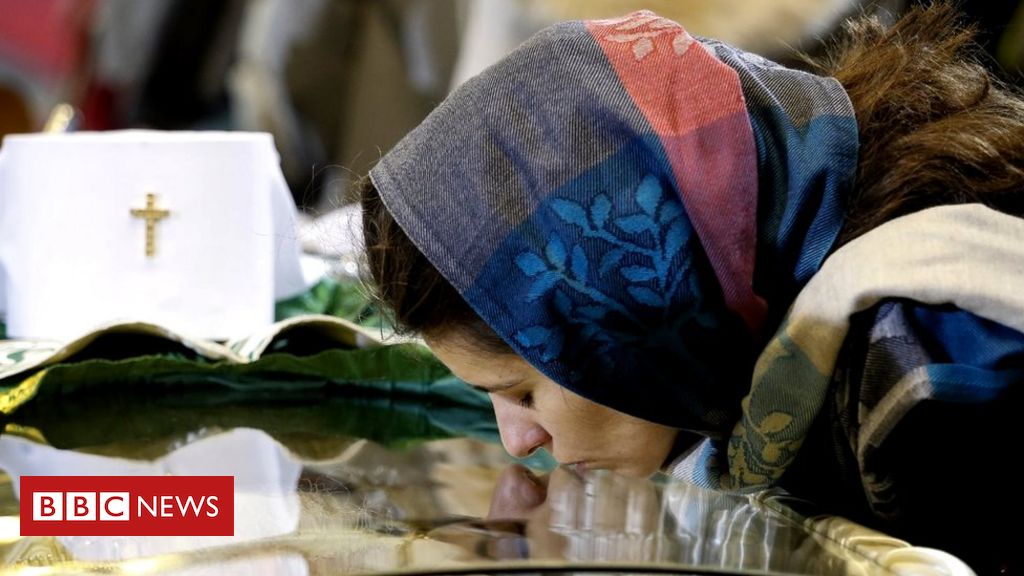 Few organisations have taken a bigger hit from the coronavirus pandemic than the Serbian Orthodox Church.

Over the past two months, Covid-19 has deprived the religious institution of its top leadership in both Serbia and Montenegro. But critics say the blows are self-inflicted, with traditional acts of worship the likely cause of infection.

The chain of events is extraordinary:

Regardless of the decimation of its leadership, the Orthodox Church remains central to many people’s lives. And while schools in Serbia have mostly moved online because of the epidemic, communion is still performed in person, often in breach of the ban on gatherings of more than five people.

“In the majority of Orthodox churches, the Mass is being held continuously, although the epidemic has decreased the number of worshippers,” says religious affairs analyst Zeljko Injac.

“The Church is highly respected in Serbian society; it is more respected than the country itself or any other national institution.

“In the Balkans and Eastern Europe in general, state systems, political systems, ideologies and regimes have changed too often – and society has not made much progress either politically or economically. The only constant for people was the Church.”

But there have been vocal critics of the Church’s practices, particularly surrounding the two recent high-profile funerals.

In Montenegro’s capital, Podgorica, mourners crowded around Metropolitan Amfilohije’s open coffin – with many kissing his hands or head. They were, perhaps, taking to heart his advice – offered before he contracted coronavirus – that religious pilgrimages act as “God’s vaccine”.

Mourners were kept at a distance during Patriarch Irinej’s funeral at Belgrade’s Church of Saint Sava. But restrictions were not enforced when he was lying in state at Belgrade Cathedral the previous day.

Many people paid their respects by kissing the plexiglass placed across the top of the open casket. And the Mass they attended involved taking wine from the same communion spoon.

This practice is “not hygienic, and carries with it the risk of infection”, epidemiologist Predrag Djuric told BBC Serbian.

He is calling on the Church to modify its rituals, and for the state to intervene if it does not. And, in common with other epidemiologists, Dr Djuric questions the wisdom of holding a large-scale public funeral when a ban on gatherings is in place.

“A very bitter message was sent that the laws and rules do not apply to some. This can have far-reaching negative consequences when it comes to the trust of the population and adherence to the measures required of them,” he says.

Health workers are bracing themselves for a possible surge of cases connected to the commemoration of the Patriarch. Disheartening, given that Serbia has been reporting record numbers of new infections in recent days.

Indeed, President Aleksandar Vucic has warned that “if we don’t show responsibility, we will be moving towards a really catastrophic scenario”.

The Church itself has said little about the epidemiological impact of continuing services. Officials and priests say they are waiting for direction from the Holy Synod.

But the five members of that body have been reduced to three, following the Patriarch’s death and the hospitalisation of Bishop David. And it is not clear when they will be able to make a ruling.

In the meantime, services continue – including a seven-day memorial for the Patriarch. Pictures from Friday’s service show that, once again, the priests did not wear masks.