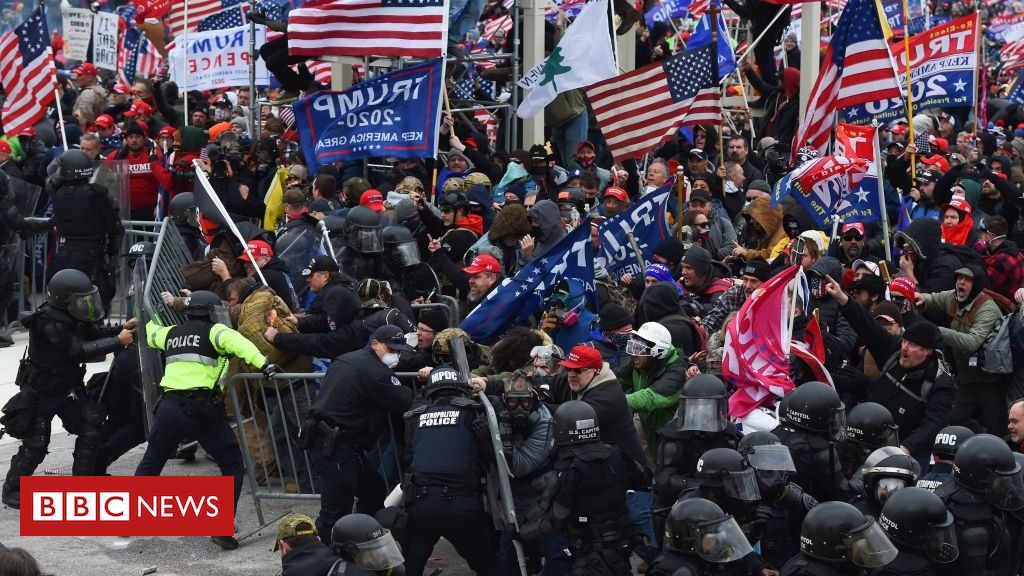 US Capitol security officials who were ousted in the wake of the 6 January attack on Congress have blamed intelligence failures for the breach.

Testifying to a Senate committee, the officials said that the rioters “came prepared for war” with weapons, radios and climbing gear.

Ex-Capitol Police Chief Steven Sund said he had prepared for a protest, not “a military-style coordinated assault”.

Four people died after pro-Trump protesters stormed the US Capitol.

Three of the four officials testifying on Tuesday to the Homeland Security and Governmental Affairs Committee resigned in the immediate wake of the attack, in which one Capitol Police officer was killed.

Chief Contee told lawmakers, who are holding the first public hearing into the attack, that he was “stunned” by how long it took for the Pentagon to deploy National Guard troops to help quell the riots.

Democrats charge that the attack amounted to an insurrection, and impeached former President Donald Trump for allegedly inciting the mob. He was later acquitted by the Senate, becoming the first president in US history to be impeached twice.

What did officials say?

All three officials agreed that there appeared to be a level of co-ordination and planning from the crowd.

Mr Sund said that pipe bombs that were placed at the edge of the security perimeter appeared to be intended to draw law enforcement away from the Capitol building.

“When the group arrived at the perimeter, they did not act like any group of protestors I had ever seen,” said the 30-year police veteran.

“A clear lack of accurate and complete intelligence across several federal agencies contributed to this event and not poor planning by the United States Capitol Police,” he added.

Capitol Police Captain Carneysha Mendoza described the clashes, telling lawmakers that she has chemical burns on her face from attackers that still have not fully healed.

“Of the multitude of events I’ve worked in my nearly 19-year career in the department, this was by far the worst of the worst,” she said.

“We could have had 10 times the amount of people working with us, and I still believe the battle would have been just as devastating.”

The officials also said that an FBI report, warning that protesters had been preparing for “war”, had failed to reach security officials on the eve of the attack.

Mr Irving said that despite media reports, “optics played no role in my decision around security”.

He denied reports that officials did not want military troops at the Capitol out of concern that it would generate bad publicity.

His account appeared to be in direct conflict with Mr Sund, who testified that Mr Irving had “stated he was concerned about the ‘optics’ of having National Guard present”.

Senators say the hearings will help determine new security measures – including a permanent fence – being considered for the Capitol in the wake of the attack.

What happened in the riot?

At the time, US lawmakers were meeting inside the Capitol to certify Joe Biden’s presidential victory.

There was a pro-Trump rally that day on the National Mall, at which the former president spoke.

He repeated unfounded claims that the election was stolen from him, and told those gathered: “If you don’t fight like hell you’re not going to have a country anymore.”

He also told them to protest peacefully but encouraged them to go to the Capitol and have their voices heard.

Thousands of his supporters then made their way to the seat of government, overwhelmed the security and smashed their way into the building.

At least 200 people have been charged for their role in the Capitol breach.

Capitol Police Officer Brian Sicknick, a 12-year veteran of the force, was killed in clashes with protesters. Two more Capitol Police officers took their own lives in the weeks after the riot.