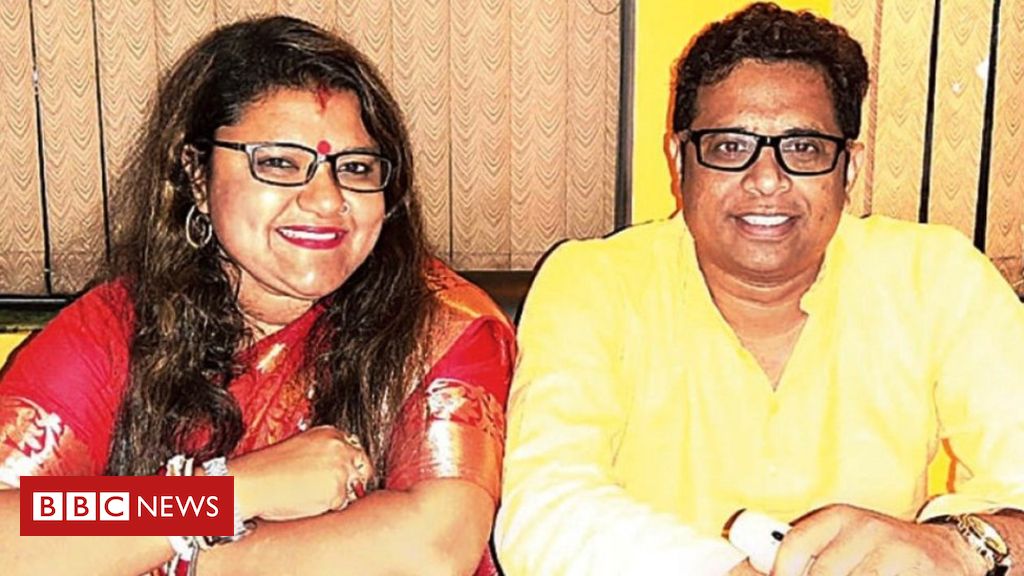 The decade-long relationship of a politician couple in the Indian state of West Bengal has hit rock bottom – and the headlines – after the wife switched to a rival party and the husband publicly threatened to divorce her.

West Bengal is gearing up for a key assembly election due in a few months and the main contest is between the BJP and the TMC.

At a press conference in the state capital, Kolkata (formerly Calcutta), on Monday, Ms Mondal Khan announced her decision to leave the BJP and listed several reasons for doing so.

She said the party had not shown any respect towards her, that it had taken in several “corrupt leaders” from rival political parties, promising to reward them at the expense of party loyalists.

“BJP has become Trinamool’s B-team. So why should I stay in this party? Why shouldn’t I go to the A-team – the TMC?” she said.

A few hours later, at a hurriedly-called press conference which local reporters described as “dramatic”, Mr Khan, 40, fought back tears as he bared his anguish and vented his anger while announcing his decision to “sever the 10-year relationship” with his wife.

He asked his wife to drop his last name. “Please refrain from using the ‘Khan’ surname hereafter, please don’t refer to yourself as Saumitra Khan’s wife. I am giving you all the freedom to chart your political destiny,” the Press Trust of India quoted him as saying.

He then went on to accuse Trinamool of “wrecking his home”.

“The TMC has stolen my wife, it has snatched away my love,” he said.

A veteran city journalist said it was “a political drama the like of which we have never witnessed before” and the story of the unravelling marriage, being played out on TV news channels, has riveted people.

Since Monday’s press conferences, the couple have been sought out by the press and have given several interviews – and the personal and the political have become entangled.

“She was my love. She was a very good wife. She was my only weakness. Of course, I’m emotional. We were together for 10 years,” Mr Khan told one journalist.

He acknowledged his wife’s role in his election win last year – he was barred from entering his constituency by a court in connection with a criminal case and she had campaigned extensively on his behalf, going door-to-door asking for votes and visiting remote villages to give speeches.

“But our story is over. I have no connection with her anymore,” he said. “I have accepted – Sujata is no more for me.”

To another journalist, he rubbished his wife’s claims that she was not respected in the BJP. “Mr Modi addresses her as his sister. What more can she ask for?” he asked.

Ms Mondal Khan too broke down in interviews as she accused her husband of neglecting her for the past 10 months.

“He’s been busy with politics. He has no time for me. For months, he hasn’t bothered to ask if I have eaten or how I have slept,” she said.

She also accused BJP leaders of “instigating” her husband and trying to “ruin her marriage”.

“Who has cast their evil eye that Soumitra is threatening to divorce me?” she asked on prime-time news, fighting back tears.

Defections and counter-defections are not uncommon in India. And they certainly shouldn’t come as a surprise to Mr Khan – he started his career in the Congress party, moved to TMC in 2013 and joined the BJP only in January 2019.

Also, it’s not unheard of for political rivals to cohabit. In India, and globally, there are instances of family members supporting rival parties and happy marriages across the political aisle.

In Bengal too, as Ms Mondal Khan has pointed out, several local politicians – fathers and sons, uncles and nieces and brothers – who support diametrically opposing ideologies “coexist happily and no-one tells them to divorce”.

“It’s a BJP conspiracy, they are asking him to leave me,” she told one interviewee. “But I think politics and home are separate and should be kept separately.”

At a time when Bengal is so polarised and with a key election battle looming, that might be easier said than done.

You may also find this interesting: