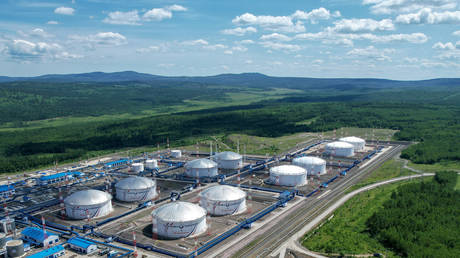 Foreign sales of Russian crude dropped 8% in the first seven months of 2021 compared to the same period a year ago, according to the latest report by the Russian Energy Agency.

The country exported 129.104 million tons of crude oil between January and July of 2021. Meanwhile, foreign shipments of Russian oil in July alone rose by 8.4% to 18.69 million tons.

Exports to the member nations of the Commonwealth of Independent States (CIS) surged 15.5% in the first seven months to 7.09 million tons, while July exports saw a major decline of nearly 42%, to 870,000 tons.

Meanwhile, sales of Russian crude to non-CIS countries dropped 9.1% during the seven-month period, and totaled 122.01 million tons. In July, exports increased by 13.2%, to 17.82 million tons.

Also on rt.com
US imports from Russia surge 50% amid price rally in commodity markets

The report attributes the decline in Russian crude exports to the implementation of the OPEC+ production cuts agreement, which also saw the supplies of other oil-producing countries reduced.