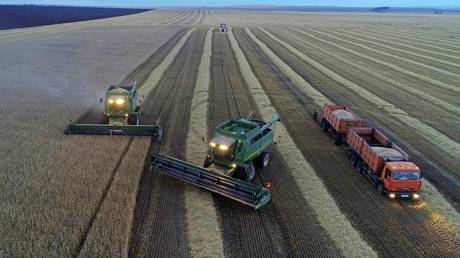 Foreign sales of Russian agricultural produce saw a substantial year-over-year growth of 18% from January to August of the current year, the AgroExport division of the countryâ€™s Ministry of Agriculture said in its latest report.

In monetary terms, the growth reportedly amounted to nearly $20 billion. Exports of grains soared 15% to nearly $6 billion, while foreign sales of oil and fat produce surged by an enormous 44% and totalled some $4.5 billion.

Exports of milk and dairy products saw an increase of 26% and totalled $905 million. International sales of fish and seafood grew by 8% to more than $3.4 billion. Meanwhile, exports in the food and processing industry increased by 6% to $2.6 billion.

Turkey and the EU were the biggest importers of Russian agricultural goods during this time, accounting for 12.5% and 11.5% of Russiaâ€™s total exports respectively. South Korea accounted for 7.5% of total exports, and Kazakhstan 5.9%. Other importers include Egypt, Belarus, Ukraine, Uzbekistan, and Saudi Arabia.

South Korean imports of Russian agricultural products saw a huge growth of 53% and totalled $1.489 billion, while purchases by the EU surged 31% to $2.356 billion.

Exports of Russian agricultural goods to Turkey reportedly grew by 30% and amounted to $2.492 billion. Kazakhstan reportedly imported $1.172 billion worth of Russian food, marking a growth of 17%. Meanwhile, exports to China dropped 7% to $2.3 billion.