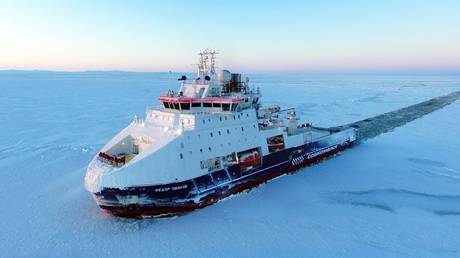 The volume of cargo transported via Russia’s Northern Sea Route (NSR) is constantly growing and has increased by 4.7 percent year-on-year in 2020, said the State Atomic Energy Corporation Rosatom.

According to Rosatom, which is NSR’s infrastructure operator, freight traffic along the route was 33 million tons, up from the 31.5 million tons transported in 2019.

The figure exceeded the targeted 29 million tons’ level, Rosatom said. It expects that by 2024 the volume of freight transportation via the NSR could reach 92.6 million tons.

The Northern Sea Route, which stretches the entire length of Russia’s Arctic and Far East regions, is expected to become a major trade route for goods shipped between Europe and Asia.

According to President Vladimir Putin, the route is “the key to the development of the Russian Arctic regions of the Far East,” and the goal is to make it a “truly global, competitive transport artery.”

The Arctic route from Southeast Asia to Europe cuts transportation time in half, compared to traditional routes through the Suez or Panama canals. In Soviet times, it was used mainly to supply goods to isolated settlements in the Arctic.