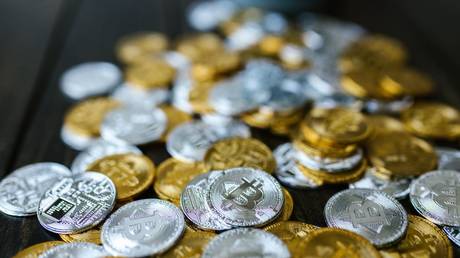 Russia is not ready to recognize bitcoin or other cryptocurrencies, because equating cryptocurrency with money would harm the countryâ€™s financial system, Dmitry Peskov, the press secretary of the Russian president, has said.

â€œIt is certain that Russia is not ready for such steps. So far there is not the slightest reason to [recognize cryptocurrencies],â€ Peskov told reporters, dubbing bitcoin a quasi-currency.

Also on rt.com
Bitcoin surges towards $52K, reaching highest level since May

â€œDe facto, equating [cryptocurrencies] with monetary instruments will bring nothing but harm to the financial and economic system, if we are talking about full recognition as a means of payment,â€ he said.

Most recently, the CBR in July advised domestic stock exchanges not to admit the shares of companies related to cryptocurrencies citing their high volatility, low transparency, and other risks that digital assets pose. The regulator emphasized that cryptocurrencies carry increased risks for people who do not have sufficient experience and knowledge in the sphere.

Also on rt.com
Cuba about to join the crypto revolution

Despite these warnings, cryptocurrencies, especially bitcoin, have been extensively used for fundraising by Russiaâ€™s civil and political activists and independent journalists, according to CoinDesk data.

Some other states, however, have been eager to embrace the crypto. El Salvador became the first country in the world to legalize bitcoin as a means of payment, granting it status as legal tender in June this year. In August, Cuba joined in, with the Cuban government publishing a resolution officially recognizing cryptocurrencies for payments on the island.