Home World USA Remember the Trump Balloon? Now Thereâ€™s One for Biden, Too. 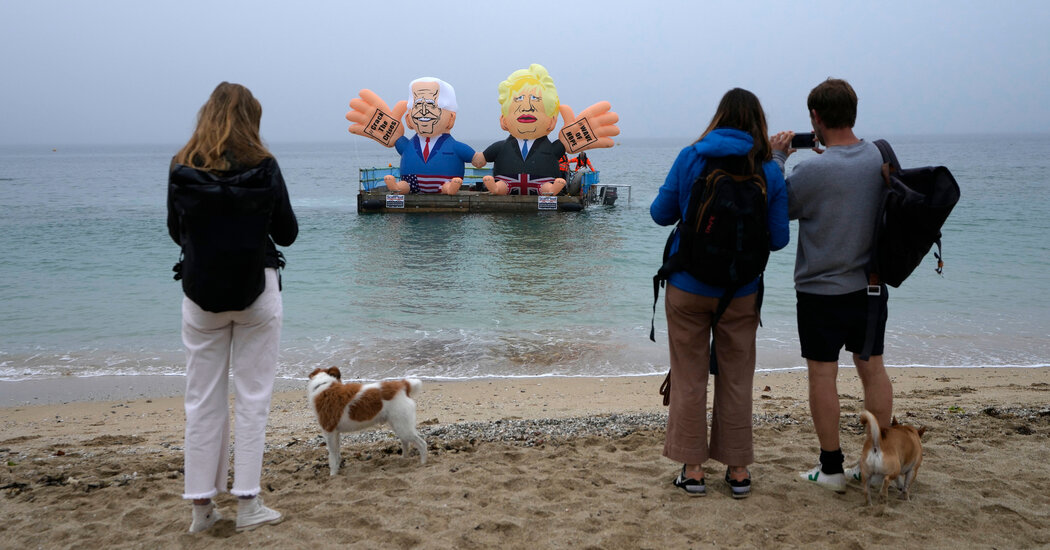 Europe|Remember the Trump balloon? Now thereâ€™s one for Biden, too.

FALMOUTH, England â€” Itâ€™s no diaper-clad Donald J. Trump, but this yearâ€™s Group of 7 meeting has its own inflatable gag: a floating blimp that caricatures President Biden and Prime Minister Boris Johnson of Britain, holding hands and waving, each wearing swim trunks in the design of their national flags.

A group of advocacy groups behind the blimp took reporters and photographers out on a morning cruise on Friday in the mist and drizzle â€” known in Cornwall as â€œmizzleâ€ â€” to see its formal launch off the coast of a Cornish port where the worldâ€™s news media is encamped to cover the summit.

While the press bobbed in the waves, taking photos of Biden and Boris against the backdrop of a mist-shrouded castle, representatives of the groups explained their dead-serious agenda for world leaders. They urged them to speed up donations of coronavirus vaccines, enact tougher measures to curb climate change and at last tackle income and gender inequality.

As they spoke, a few rays of sunshine poked through the fog. That prompted jokey references to hopes that â€œthe mist would liftâ€ from the leaders as the activists did their best to entertain their rain-spattered guests.

â€œWe try to organize optimism to have impact,â€ said Jamie Drummond, who founded the advocacy group One with Bono, the leader singer of U2. â€œBut there are many reasons to be very angry as well. Not enough is being done.â€

Mustering anger is not easy when Covid restrictions make it impossible to gather crowds of protesters, security cordons keep them 25 miles from where the leaders are staying, and one of the antagonists at such gatherings, Mr. Trump, has been replaced by the more emollient Mr. Biden.

When the Trump baby balloon first took flight in July 2018 in London, during a visit by the president, the police estimated that more than 100,000 demonstrators were on hand. The Biden-Boris blimp will float in Falmouthâ€™s harbor, where it can be viewed by the press and the scattered tourists left in an otherwise locked-down port.

Mr. Drummond insisted that a new United States president had not taken the wind out of the advocacy efforts. There was no in-person Group of 7 last year because of the pandemic, he said, and the combination of a health and climate crisis lend this gathering as much urgency as any previous summit.

â€œThere are hard facts and data â€” about Covid, about climate, about ecology and about injustice â€” which are not being paid attention to,â€ Mr. Drummond said. â€œAnd the response from leaders is not commensurate with these crises.â€

Still, the image of Mr. Biden and Mr. Johnson waving jauntily to those on shore felt less like a cry for help than a reminder of the extravagant display of unity by the two leaders when they first met the previous day.

The advocacy groups will strike a more somber note on Friday evening, when they plan to hold two vigils, in Falmouth and Carbis Bay, to honor the estimated 3.7 million people who have died of Covid worldwide.