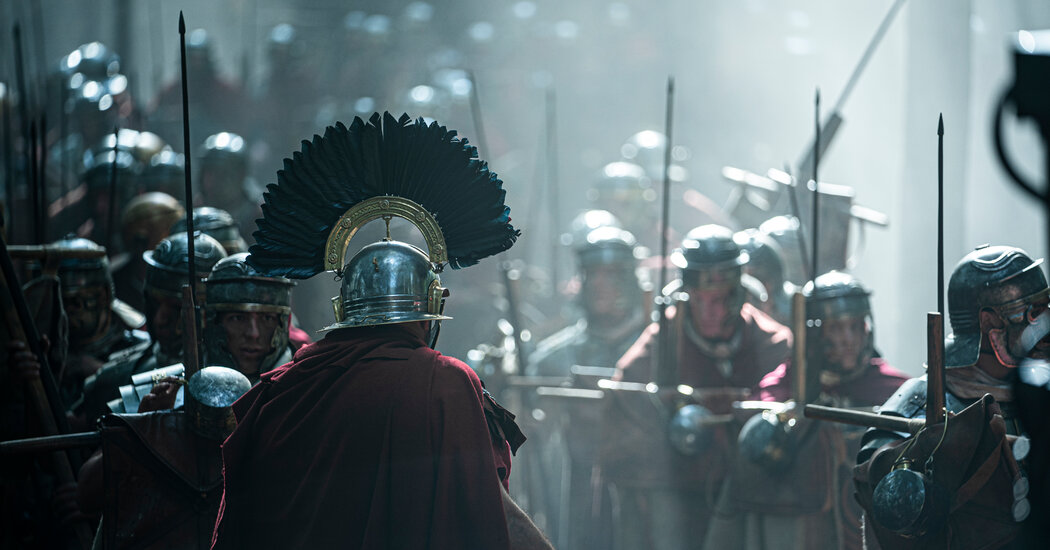 BERLIN â€” For those unfamiliar with German history, the new Netflix show â€œBarbariansâ€ might not seem especially provocative. The historical epic â€” reminiscent of the long-running History channel series â€œVikingsâ€ â€” centers on a tribe of villagers in the first century A.D. trying to survive in a forested region of what is now northern Germany. Its rugged protagonists clash violently with rival tribes and, most of all, with the Roman forces who control the area.

But the showâ€™s six episodes build toward the first fictionalized depiction on German TV of an event that remains fraught even after two millenniums: the Battle of Teutoburg Forest, which put an end to the Roman Empireâ€™s aspirations of controlling much of what is now Germany.

German nationalists, including the Nazis, have used the battle as an ideological rallying point â€” a supposed foundational moment for German civilization and proof of their superior pedigree and fighting skills. To this day, the battle, and the tribesâ€™ leader in the fight, Arminius, remain sources of inspiration for far-right extremists, who regularly make pilgrimages to related sites.

The Netflix show arrives at a moment of increased German interest in the period, coinciding with a high-profile new exhibition of archaeological finds, â€œThe Germanic Tribes,â€ at the James Simon Gallery on Museum Island here. Both the â€œBarbariansâ€ creators and the exhibition curators faced the dilemma of how to depict the period for a broad audience without giving oxygen to extremists.

Arne Nolting, a writer and showrunner of the series, explained via Zoom last week that part of his inspiration for making a show about the Battle of Teutoburg Forest was a desire to reclaim a pivotal moment in European history from the far right. â€œWe didnâ€™t want to be scared away and leave the subject to those forces we detest,â€ he said.

The battle has been a political flash point since the 19th century, when modern-day Germany was a fractured mosaic of smaller states. Nationalists embraced Arminius as a symbol of German identity in their push for unification. In 1875, four years after the German Empireâ€™s founding, officials unveiled a colossal statue of Arminius in the Teutoburg Forest. (The battle is now believed to have taken place 50 miles away at a site called Kalkriese.)

Under the Third Reich, the Nazi ideologue Alfred Rosenberg depicted Arminius as part of a â€œline of German ancestryâ€ leading to Adolf Hitler, and schoolbooks of the period claimed that he had saved â€œthe purity of German blood.â€ In 2009, the far-right extremist National Democratic Party of Germany organized a â€œremembrance marchâ€ commemorating the battle, under the slogan â€œ2,000 years of fighting against foreign infiltration.â€

Nolting said that he and the other showrunners were conscious of this political baggage while crafting the narrative arc of â€œBarbarians,â€ which premiered on Oct. 23. The show focuses on three characters with connections to a real-life tribe called the Cherusci: Thusnelda (Jeanne Goursaud), the daughter of a Cherusci leader; Folkwin (David SchÃ¼tter), a fictional warrior; and Arminius (Laurence Rupp).

In its telling, Arminius is born a Cherusci but is taken away by the Roman occupiers as a young boy, only to return as a member of the imperial army â€” a portrayal that reflects historiansâ€™ belief that the real-life Arminius served in the Roman military before changing sides. The showâ€™s plot is set in motion when the Romans demand large tributes from the Cherusci, heightening tensions and gradually leading Arminius to doubt his allegiance to the empire.

Jan Martin Scharf, another writer and showrunner, said that the production team had taken a consciously gritty approach to the subject matter to avoid glorifying the violence between the Cherusci and the Romans. They also wanted to emphasize Arminiusâ€™ identity as a migrant, he said, adding, â€œIt was important for us not to show him as some big war hero or the founder of a German empire.â€

And the creators cast Rupp, an Austrian actor, in the role in part because, with his darker complexion and hair, he did not fit the blond, blue-eyed depictions of Arminius that have been common in the past.

When it came to overseeing the â€œGermanic Tribesâ€ exhibition, Matthias Wemhoff also found depicting this period of German antiquity to be a fraught endeavor. Wemhoff, the director of the Museum of Prehistory and Early History in Berlin, said in an interview that he and his team had taken a matter-of-fact approach to avoid appealing to the far right.

Wemhoff said that his team had worried â€œa lotâ€ about how to avoid appealing to the far right, and that they had chosen a restrained subtitle â€” â€œArchaeological Perspectivesâ€ â€” for that reason. â€œWeâ€™ve never had an exhibition with such a plain title,â€ he said.

Wemhoff said that many Germans had a false or clichÃ©d view of the period because it hasnâ€™t been widely taught in German schools since World War II. â€œAfter the Nazi period, the subject was scorched,â€ he said. â€œPeople have made a large detour around it.â€

The greatest false assumption, he said, is that the Germanic tribes involved in the battle were the precursors to modern-day Germans. In fact, he noted, most tribes in the area abandoned their settlements and left modern-day German territory starting in the late fourth century.

Todayâ€™s Germans, Wemhoff noted, are descended from groups that came from other regions of Europe. â€œThere is no continuity,â€ he said. â€œFor people who have these strong, pre-existing images in their heads, itâ€™s a challenge to engage with the topic.â€

Nolting said he had encountered little far-right online feedback before the Netflix showâ€™s premiere. The series has been positively received in Germany, with most reviewers praising its production values, acting and emphasis on historical accuracy. DWDL, an online portal focused on German media, praised its ability to evade the â€œtrapsâ€ of its historical source material.

The creators emphasized that they relied on historical research to depict the periodâ€™s costuming and architecture. And for reasons of accuracy, the actors playing Romans speak their lines in ancient Latin. But the creators acknowledge that they took considerable liberties with other aspects of the story.

The climactic battle, which historians believe stretched over three days, is depicted as a much shorter showdown, involving towering walls of flame reminiscent of â€œGame of Thronesâ€ and with the kinds of emotional confrontations that are unlikely to have happened in real life.

On this issue, however, Nolting was unapologetic. â€œItâ€™s not a history lesson,â€ he said. â€œWeâ€™re making entertainment.â€