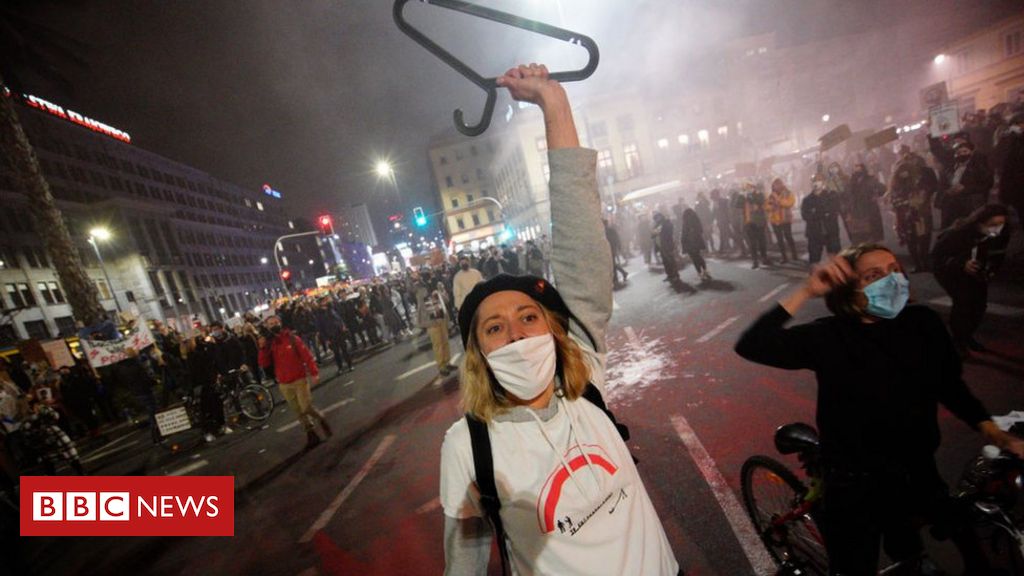 A strike is under way in Poland by women opposed to a court ruling that introduced a near-total ban on abortion in the mainly Catholic country.

It is the seventh straight day of demonstrations against the decision that outlawed terminations on the grounds of severe health defects.

Scuffles erupted in parliament on Tuesday with opposition MPs carrying signs saying “This is war” and “Shame”.

The powerful ruling party leader said the decision could not be reversed.

Jaroslaw Kaczynski, who is also the deputy prime minister and widely considered to be the country’s real powerbroker, said the protests were an attempt to “destroy” Poland. He urged people to “defend” the nation as well as the Catholic Church.

Last Thursday’s ruling by the Constitutional Court closed one of the few remaining legal grounds for abortion in Poland, and followed a legal challenge by MPs from the ruling nationalist Law and Justice party (Pis) last year.

The decision means terminations are only valid in cases of rape or incest, or to protect the mother’s life. The ruling cannot be appealed against but only comes into force after it is published in the journal of laws, AFP news agency reports. It is not clear when that will happen.

A opinion poll conducted for Gazeta Wyborcza suggested that 59% of those surveyed disagreed with the ruling.

What’s the latest on the protests?

Women opposed to the ruling are expected to stay away from work and school and refuse to do domestic chores, in a protest inspired by a women’s strike in Iceland in 1975.

A similar demonstration was held in 2016, when thousands of Polish women marched through the streets wearing black as a sign of mourning for their rights as proposals to restrict terminations were being debated in parliament.

On Tuesday, centrist and left-wing MPs held up placards and shouted pro-choice slogans at Prime Minister Mateusz Morawiecki, after the conservative speaker of parliament compared the red lightning bolt that is symbol of the protest movement to Nazi imagery.

“We tried to show solidarity with the protesters that filled up the streets and demanded what they’re demanding… a real debate about the full reproductive rights for women,” Agnieszka Dziemianowicz-Bak, a left-leaning MP, told the BBC.

But in a video message on Facebook, Mr Kaczynski said: “There could not have been a different ruling given the constitution… We have to remember that we’re completely in the right when it comes to legal questions.”

Earlier, Mr Morawiecki called for an end to the demonstrations, saying protesters were disregarding “massive risks” from the coronavirus pandemic.

Abortion is a deeply divisive issue in Poland, which already had one of the strictest laws in Europe. A 2014 opinion poll by the CBOS research centre found that 65% of Poles surveyed were against abortion, 27% saw it as acceptable and 8% were undecided.

However, for years opinion polls have found a clear majority against the latest tightening of the law.

There are just over 1,000 legal abortions every year in Poland, but women’s groups say the number of abortions carried out illegally or abroad could be between 80,000 and 120,000.

Observers say the government and the PiS seem to have been taken by surprise by the size of the protests, which have also contributed to unusually strong criticism towards the powerful Catholic Church.

The influence of the Church is waning among younger generations, and the protests have been attended by large numbers of young women. On Sunday, groups targeted churches and some services were disrupted.

There is also anger at the way the government pushed the change through without parliamentary debate or public consultation.

You may also find interesting: