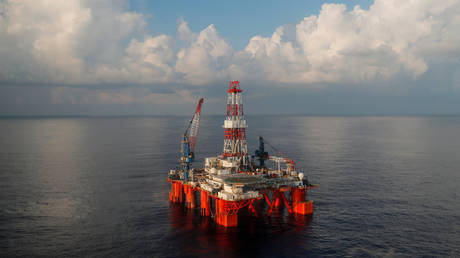 The Philippines is lifting a moratorium on oil and gas exploration in the South China Sea that could lead to the Philippines and China potentially creating a joint venture to explore for resources.

Philippine President Rodrigo Duterte has approved the recommendation of the country’s Energy Department to lift the moratorium on exploration in the West Philippine Sea, Energy Secretary Alfonso Cusi said on Thursday, as reported by Reuters. The service contractors of three blocks in the West Philippine Sea have already been notified that they could resume exploration in their respective licenses, Cusi added.

The moratorium was imposed by Duterte’s predecessor Benigno Aquino III when the Philippines took China to court over the long-running dispute over territorial water claims in the South China Sea.

Also on rt.com
Cash in on chaos: Oil piracy has SPIKED during COVID pandemic

A court in The Hague in 2016 ruled against China’s claims and in favor of the Philippines. China, however, has not acknowledged the ruling, which has heightened tensions in the area. Instead, it has continued with its agenda, according to which most of the sea is Chinese waters. The long-running dispute in the South China Sea involves territorial claims by China as well as Vietnam, the Philippines, Taiwan, Brunei, and Malaysia. China has territorial claims to about 90 percent of the South China Sea, which has put it at odds with its neighbors.

The lifting of the Philippine moratorium was part of Duterte’s efforts to proceed with a potential joint oil exploration deal with China, the broad strokes of which were agreed in 2018.

At the end of last year, the Chinese and Philippine foreign ministers sealed an agreement for the two countries to pursue joint oil and gas exploration in the South China Sea.

The talks between the two countries on the South China Sea’s oil and gas potential and how to exploit it have been going on for years. An agreement has been difficult to reach, however, mostly because of China’s territorial claims to the basin, which cover nearly the entirety of it.