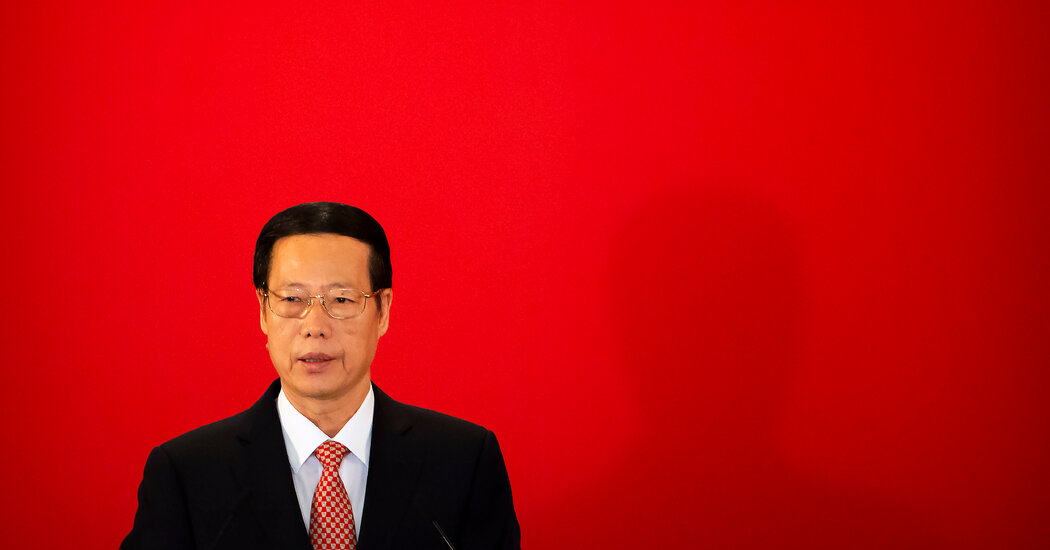 Before Zhang Gaoli was engulfed in accusations that he had sexually assaulted a tennis champion, he seemed to embody the qualities that the Chinese Communist Party prizes in officials: austere, disciplined, and impeccably loyal to the leader of the day.

He had climbed steadily from running an oil refinery to a succession of leadership posts along Chinaâ€™s fast-growing coast, avoiding the scandals and controversy that felled other, flashily ambitious politicians. He became known, if for anything, for his monotone impersonality. On entering Chinaâ€™s top leadership, he invited people to search for anything amiss in his behavior.

â€œStern, low-key, taciturn,â€ summed up one of the few profiles of him in the Chinese media. His interests, Xinhua news agency said, included books, chess and tennis.

Now the allegation from Peng Shuai, the professional tennis player, has cast Mr. Zhangâ€™s private life under a blaze of international attention, making him a symbol of a political system that prizes secrecy and control over open accountability. The allegation raises questions about how far Chinese officials carry their declared ideals of clean-living integrity into their heavily guarded homes.

â€œZhang epitomized the image of the bland apparatchik that the party has worked hard to cultivate,â€ said Jude Blanchette, a scholar at the Center for Strategic and International Studies in Washington.

Ms. Pengâ€™s account â€” that Mr. Zhang coerced her into sex during a yearslong, on-off relationship â€” has not been corroborated. The Chinese authoritiesâ€™ vigorous efforts to stifle any mention of the matter suggest there is little chance that Mr. Zhang will ever be called to public account, even if that might clear his name. Neither Ms. Peng nor Mr. Zhang have made any public comment since her post appeared.

â€œOne would have to imagine, sadly, that in an opaque and patriarchal system of unchecked power these sorts of abuses are not uncommon,â€ Mr. Blanchette added.

When Ms. Peng, 35, posted her accusation on the popular social media platform Weibo on the night of Nov. 2, she took readers into the cosseted personal lives of the Communist Partyâ€™s elite.

In Ms. Pengâ€™s post, addressed to Mr. Zhang, she said the two had met more than a decade earlier when her career was taking off and his was nearing its peak. At the time, she wrote, he was the Communist Party chief of Tianjin, a northern port city, and he told her his political position made it impossible for him to divorce his wife.

Mr. Zhang dropped contact with her, the post said, after ascending to the Communist Partyâ€™s highest body, the Politburo Standing Committee, a post he held for five years. During this time, he was entrusted with overseeing Chinaâ€™s initial preparations for the 2022 Winter Olympics, which is now being overshadowed by the furor.

About three years ago, after stepping down, Mr. Zhang called the head of a tennis academy to summon Ms. Peng to play tennis with him at a party-owned hotel in Beijing, called the Kangming, that plays host to retired officials, according to her post.

Later that day, she said, he forced her to have sex in his home. They resumed a relationship, but he insisted it remain furtive. She had to switch cars to be able to enter the government compound where he lives in Beijing, she wrote. He warned her to tell no one, not even her mother.

With rarely a word or hair out of place, Mr. Zhang has seemed an unlikely protagonist for a scandal that has rippled around the world. He belongs to a generation of officials who rose after the upheavals of the Cultural Revolution, taking on the self-effacing ethos of collective leadership under Hu Jintao, who preceded the countryâ€™s current leader, Xi Jinping.

Mr. Zhang, who turned 75 the day before Ms. Pengâ€™s post appeared, was born in a fishing village in Fujian Province. According to official accounts, his father died when he was a child. He began studying economics at Xiamen University in Fujian, but his education was cut short by the Cultural Revolution, when Mao Zedong largely shut down university classes.

In 1970, he was assigned to work at oil fields in southern China, where he first heaved bags of cement, according to official profiles.

Within years, he climbed into management. As Deng Xiaoping and other leaders shepherded China into an era of market reforms, Mr. Zhang became one of those officials whose economic expertise and smattering of higher education marked them for promotion. He perfected the methodical, button-down manner of a cadre who had submerged his life in the party hierarchy.

He served as the party leader of Shenzhen, the city next to Hong Kong that Deng promoted as a showpiece of Chinaâ€™s newfound commercial dynamism. He won the favor of Dengâ€™s successor, Jiang Zemin, and by the early 2000s was put in charge of Shandong, a province crowded with ports and factories.

In 2007, he was promoted to oversee Tianjin, the provincial-level port whose fortunes had flagged while other coastal areas boomed. Mr. Zhang pushed plans to convert a drab industrial area of Tianjin into a modern business precinct â€” a â€œnew Manhattanâ€ â€” that would attract multinationals and wealthy residents.

That project has faltered under debt and inflated expectations, but Mr. Zhang moved upward into the central leadership in 2012. He became executive vice premier: in effect, Chinaâ€™s deputy prime minister.

â€œI hope that all the party members, officials and members of the public in this city will continue to exercise strict oversight over me,â€ Mr. Zhang said in 2012 as he left Tianjin for Beijing.

Mr. Zhangâ€™s experience managing big projects made him a safe pair of hands for some of the initiatives that Mr. Xi used to make his mark. He negotiated oil deals with Russiaâ€™s president, Vladimir V. Putin, and promoted Mr. Xiâ€™s Belt and Road Initiative.

Mr. Zhang oversaw the early preparations for the 2022 Winter Olympics in Beijing. In 2016, he met with Thomas Bach, the president of the International Olympic Committee, as Mr. Bach was visiting the city.

It was Mr. Bach who on Sunday held a video call with Ms. Peng intended to reassure athletes and others worried about her disappearance in the days after her post appeared.

Earlier in Mr. Xiâ€™s term, lurid reports about officialsâ€™ sexual misdeeds at times surfaced in state media, disclosures intended to signal that he was serious about purifying the party.

Mr. Xiâ€™s priority now appears to be fending off any odor of scandal tainting the partyâ€™s top echelons. References to Ms. Pengâ€™s account were nearly wiped off the internet inside China. A Chinese foreign ministry spokesman, Zhao Lijian, suggested that the attention around Ms. Peng had become â€œmalicious hype.â€ Official media have not shown or reported on Mr. Zhang since Ms. Peng went public; nor have they directly challenged her account.

â€œEven to deny her allegations would be to give them a level of credence that you couldnâ€™t then roll back,â€ said Louisa Lim, a former journalist who long worked in China and the author of â€œThe Peopleâ€™s Republic of Amnesia.â€

When Mr. Zhang retired in 2018, he dropped from public view, as is the norm in Chinese politics. Retirement often comes with perks like high quality health care, housing and travel within China, but also some monitoring.

â€œOnce you retire, your movements are reported to the partyâ€™s department of organization,â€ said Minxin Pei, a professor of government at Claremont McKenna College in California who studies the party.

In her post, Ms. Peng seemed to indicate that she and Mr. Zhang had recently had a disagreement, and that he had once again â€œdisappearedâ€ as he did before. She wrote, though, that she expected that her account would have little effect on Mr. Zhangâ€™s eminence.

â€œWith your intelligence and wits,â€ she wrote, â€œI am sure you will either deny it, or blame it on me, or you could simply play it cool.â€