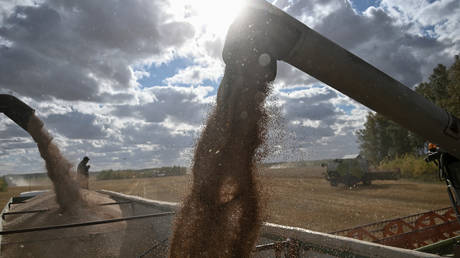 The coronavirus shopping frenzy has spilled over into government level as countries begin hoarding food amid fears that the pandemicâ€™s effect on global supply chains could cause price hikes.

Nations dependent on food imports seem to be the most concerned about shortages of agricultural goods as the number of coronavirus infections continues to rise. For example, Egypt, the largest importer of wheat globally, increased purchases by almost 40 percent year-on-year between July and August. The countryâ€™s officials earlier told Reuters that Cairo wants to have sufficient â€œessential goodsâ€ for no less than six months as a preemptive measure in the light of the ongoing pandemic.

Most of Egyptâ€™s wheat supplies come from Russia, which introduced a grain export quota in the first half of this year to shield its own domestic market. The move was considered alarming in the wake of coronavirus uncertainty, but analysts said that the world is not going to be left without Russian grain as alternative suppliers can be found.

Jordan has also been boosting grain purchases. According to a Bloomberg report, the countryâ€™s wheat reserves reached a record 1.35 million tons. While this is enough to cover the countryâ€™s needs for a year and a half, the government is considering the addition of even more food to its strategic stockpile to ensure food safety.

Earlier this year, the UAE imported 4,500 dairy cows from Uruguay for the same reason. The nation said that it was just the first such shipment andÂ more were set to follow.

â€œCovid-19 has forced consumers to shift from just-in-time inventory management to a more conservative approach which was labeled just-in-case,â€ Bank of America analysts said, as quoted by Bloomberg. â€œThe result is that consumers are holding more inventory as a precaution against future supply disruptions.â€

Similar steps were undertaken by Morocco and Pakistan. However, analysts noted that some of the increased imports stem from the nationsâ€™ desire to purchase commodities in advance to avoid paying more for them later.Â Extensive purchases combined with other factors, including strong demand from China, which has been dealing with flooding and inclement weather, have already pushed prices up. The Bloomberg Agriculture Subindex, which measures key farm goods futures contracts, jumped around 20 percent since Juneâ€™s lows.